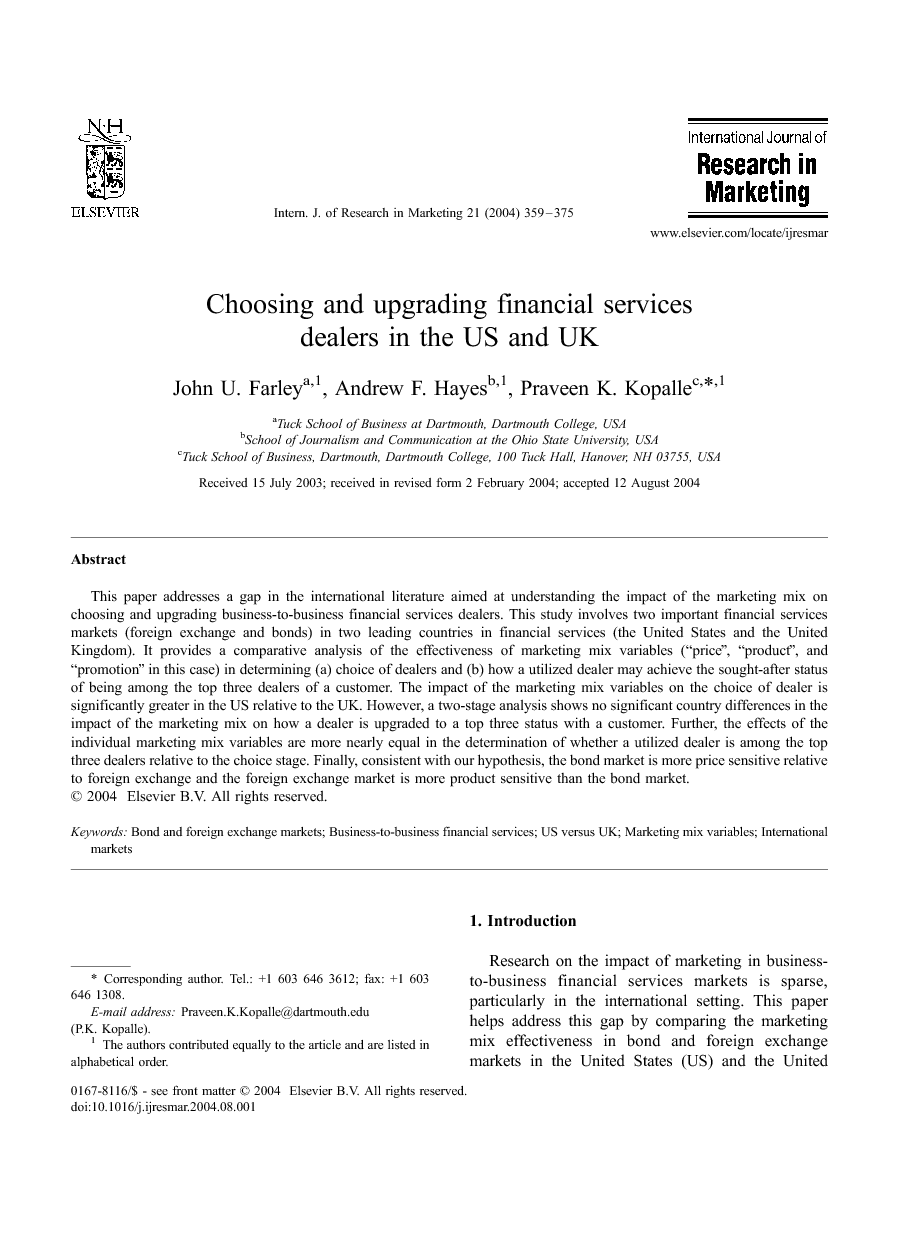 This paper addresses a gap in the international literature aimed at understanding the impact of the marketing mix on choosing and upgrading business-to-business financial services dealers. This study involves two important financial services markets (foreign exchange and bonds) in two leading countries in financial services (the United States and the United Kingdom). It provides a comparative analysis of the effectiveness of marketing mix variables (“price”, “product”, and “promotion” in this case) in determining (a) choice of dealers and (b) how a utilized dealer may achieve the sought-after status of being among the top three dealers of a customer. The impact of the marketing mix variables on the choice of dealer is significantly greater in the US relative to the UK. However, a two-stage analysis shows no significant country differences in the impact of the marketing mix on how a dealer is upgraded to a top three status with a customer. Further, the effects of the individual marketing mix variables are more nearly equal in the determination of whether a utilized dealer is among the top three dealers relative to the choice stage. Finally, consistent with our hypothesis, the bond market is more price sensitive relative to foreign exchange and the foreign exchange market is more product sensitive than the bond market.

Research on the impact of marketing in business-to-business financial services markets is sparse, particularly in the international setting. This paper helps address this gap by comparing the marketing mix effectiveness in bond and foreign exchange markets in the United States (US) and the United Kingdom (UK). We conduct this analysis both for choosing a dealer and for upgrading the dealer to the coveted “top three” status. We develop exploratory hypotheses similar in spirit to Dekimpe, Francois, Gopalakrishna, Lilien, and Van den Bulte (1997) and use a two-stage model specification (De Bruyn & Lilien, 2004, Gensch, 1987, Gopalakrishna & Lilien, 1995 and Manrai, 1995). The two countries, US and UK, were chosen in this application because of their size, their impact on global commerce, the prominence of financial services industries in these countries, and our ability to gain access to interviews with large samples of buying firms. The US and the UK, the world's two major financial markets, account for about 46.9% of the trading volume in the bond market and about 46.4% in the foreign exchange market (Greenwich Reports, 2003). In both markets in both countries, transactions of $100 million are common, and those over $1 billion are not uncommon. In the bond market, customers typically are institutional investors (insurance companies, mutual and pension funds, and financial institutions), while dealers range from specialized bond dealers to departments in investment banks. In foreign exchange, customers are usually large (often multinational) corporations and dealers are generally independent divisions in commercial and investment banks. Both markets have experienced considerable growth. Greenwich Associates (Greenwich Reports, 2001) indicates the global foreign exchange market alone increased from $65 billion in 1981 to $1.5 trillion in 2000. In the bond market, for example, US Treasury securities outstanding have grown 700% from 1977 to 2000. Foreign exchange and bond customers often use many dealers simultaneously. Our analysis and results are potentially important to both academic researchers and practitioners because of globalization of business in general and business-to-business financial services in particular in today's environment (Douglas, 2001). For example, what gets a dealer used by a customer is not necessarily what really gets the dealer to the top. The results for the top three status are particularly important because recent reports (Journal of Commerce, 1998) suggest the top three dealers of a customer may receive up to 75% of that customer's business in markets such as these.

Our interest is in (1) understanding to what extent the marketing mix variables exert a significant effect in the choice of dealers, (2) determining to what extent the effects of the marketing mix differ across the two countries and the two markets, and (3) evaluating the extent to which the impact of the independent variables differs in the usage versus upgrade decision. We develop a reduced model by first evaluating which blocks of independent variables have a strong, less strong but noticeable, or no effect on the dependent variable by examining the partial contribution of each block of variables to the model fit.5