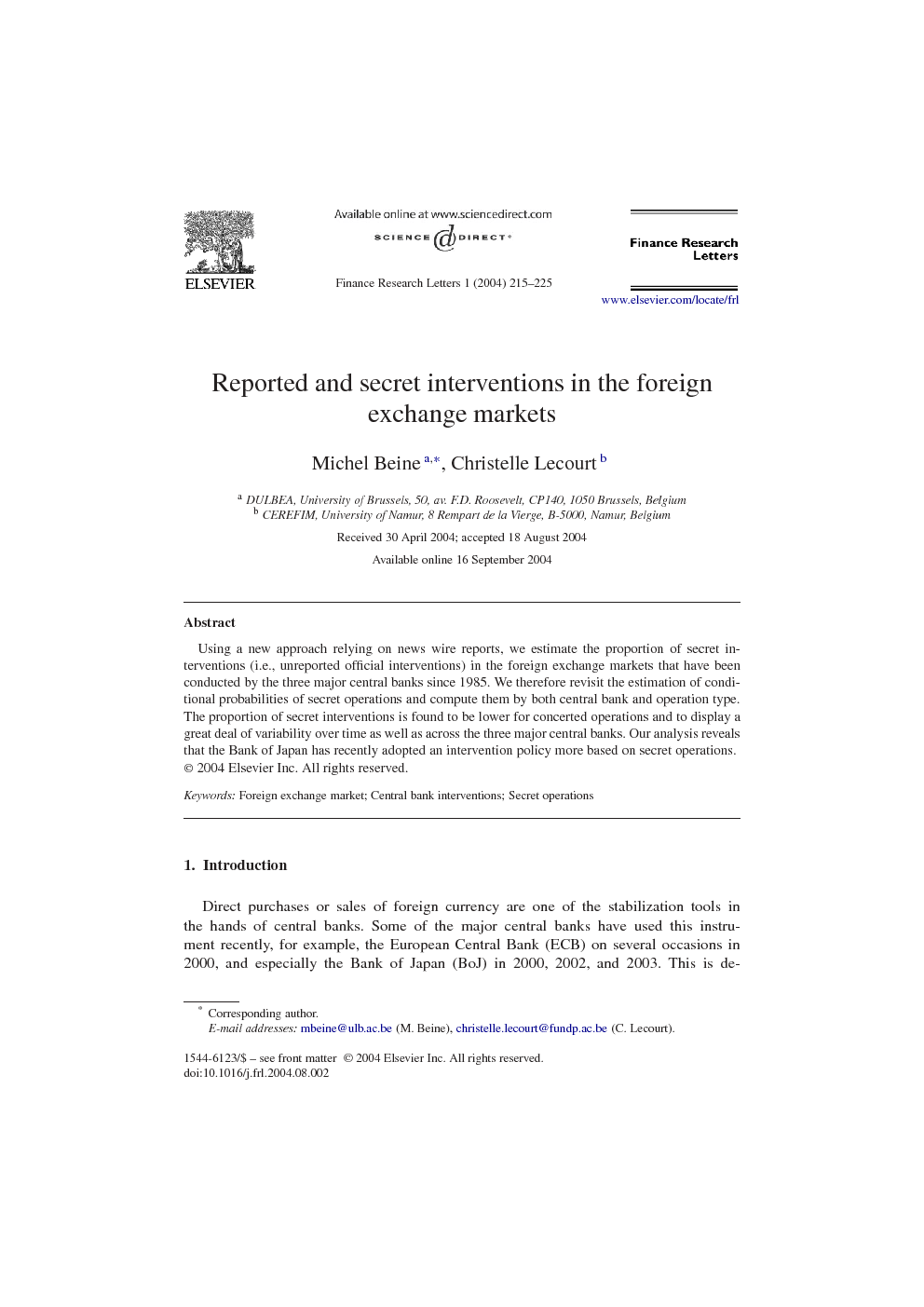 Using a new approach relying on news wire reports, we estimate the proportion of secret interventions (i.e., unreported official interventions) in the foreign exchange markets that have been conducted by the three major central banks since 1985. We therefore revisit the estimation of conditional probabilities of secret operations and compute them by both central bank and operation type. The proportion of secret interventions is found to be lower for concerted operations and to display a great deal of variability over time as well as across the three major central banks. Our analysis reveals that the Bank of Japan has recently adopted an intervention policy more based on secret operations.

Direct purchases or sales of foreign currency are one of the stabilization tools in the hands of central banks. Some of the major central banks have used this instrument recently, for example, the European Central Bank (ECB) on several occasions in 2000, and especially the Bank of Japan (BoJ) in 2000, 2002, and 2003. This is despite the fact that such operations have been shown to be ineffective, as documented in the empirical literature Dominguez, 1998 and Beine et al., 2002. The main body of the literature reveals that these operations do not move the exchange rate very successfully in the desired direction except in the very short run Dominguez, 2003a and Payne and Vitale, 2003. Furthermore, such interventions generally increase foreign exchange volatility (Beine et al., 2003). The empirical literature has shown that the type of operation conducted in the foreign exchange (FX) market is important. Several operation types have been put forward. One category differentiates unilateral interventions—those conducted by a single central bank—from coordinated interventions that are conducted jointly by the two central banks toward the same objective. Catte et al. (1994) show that coordinated interventions have a larger impact, a result confirmed by subsequent studies. Another category assesses the prevailing state of the market at the time the operations are conducted. Beine et al. (2003) show that coordinated interventions, depending on the prevailing level of volatility, may increase or lower market uncertainty. Dominguez (2003b) finds that interventions have larger price effects when the flow of macroeconomic news is relatively strong. Finally, another crucial category separates secret interventions, i.e., official interventions that are unknown to market participants, from “public” interventions reported in the press. This paper revisits the last category. Most recent operations conducted by the major central banks are reported (by the central bank themselves) to have been sterilized. This rules out any monetary channel as the main channel of influence. Sterilized exchange rate interventions are said to exert different impacts depending whether they are unknown or known to the market. Referring to the well-known signalling channel for these interventions,1 it might be difficult to justify the use of secret rather than “public” interventions. This has led to the so-called secret intervention puzzle (Sarno and Taylor, 2001).2 Quite recently, however, relying on the microstructure approach to exchange rates, some authors like Evans and Lyons (2001) found a certain amount of support for an effective portfolio channel in the presence of asymmetric information. Significantly, their analysis assumes that the central bank trades are anonymous, i.e., that traders are not able to identify the origin of the order flow involved by the operation.3 The distinction between secret and reported interventions is therefore of overwhelming importance to measure the price impacts of these interventions and to identify the operative transmission channel. This paper re-examines the procedure used to isolate secret interventions from the reported ones. We employ a new identification scheme that overcomes most of the limitations that result from using financial newspapers. Our analysis is conducted over the longest period for which data are available for the two major FX markets, i.e., the Euro (deutsche mark or DEM before 1999) against the US dollar (USD), and the Japanese yen against the USD. This paper makes an interesting contribution to the literature by estimating conditional probabilities of reported and secret interventions, not only by central bank (as proposed in the previous literature) but also by the type of operation (coordinated vs. unilateral). We show that the latter distinction further explains these probabilities. Finally, our analysis allows us to document the evolution of the proportion of the secret interventions over time. While most researchers have recently concluded that secret interventions were outdated and not used anymore by the major central banks, we show that such operations have recently been favored by the BoJ. This is an important result given the fact that the BoJ has been almost the only major central bank active in the FX markets over the last eight years. The paper is organized as follows. Section 2 discusses our identification procedure; Section 3 analyzes our results, compares our estimations with the ones proposed in previous studies and addresses the question of the evolution over time of secret interventions; and Section 4 concludes.