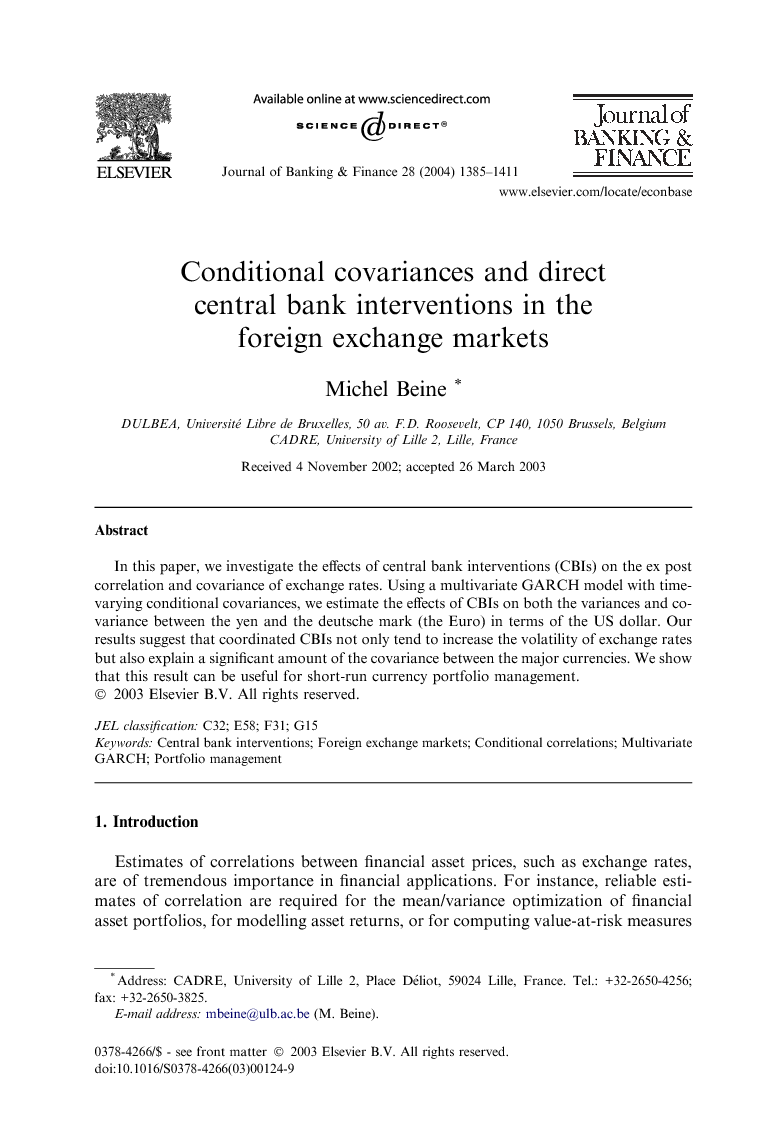 In this paper, we investigate the effects of central bank interventions (CBIs) on the ex post correlation and covariance of exchange rates. Using a multivariate GARCH model with time-varying conditional covariances, we estimate the effects of CBIs on both the variances and covariance between the yen and the deutsche mark (the Euro) in terms of the US dollar. Our results suggest that coordinated CBIs not only tend to increase the volatility of exchange rates but also explain a significant amount of the covariance between the major currencies. We show that this result can be useful for short-run currency portfolio management.

Estimates of correlations between financial asset prices, such as exchange rates, are of tremendous importance in financial applications. For instance, reliable estimates of correlation are required for the mean/variance optimization of financial asset portfolios, for modelling asset returns, or for computing value-at-risk measures of asset portfolios (Jorion, 2001). Most empirical studies (for example, Bollerslev et al., 1988) emphasize that conditional covariances and conditional correlations are variable over time. This throws doubt on the usual implicit or explicit assumption that correlations among financial assets are constant. This calls both for econometric approaches aimed at capturing the way these covariances evolve over time, and for a better understanding of their determinants. Simple methods such as rolling historical correlations provide a first step toward a better understanding of the correlation process. They are, however, insufficient to capture the full dynamics of this process. There is, therefore, significant econometric literature concerned with developing econometric tools that can capture the (unobservable) time-varying covariances. These approaches basically extend the existing multivariate constant correlation GARCH model of Bollerslev (1990). Bollerslev et al. (1988) had earlier developed the VECH model in which each element of the variance/covariance matrix follows a univariate GARCH model driven by the corresponding cross-product of the return innovations.1 While interesting, these approaches should be extended by introducing explanatory variables of the conditional variances and covariances.2 This would permit a clearer understanding of the way correlations react to financial events and policy interventions. In turn, such an analysis should be valuable for forecasting purposes. To improve the relevance of these econometric models, the financial variables that are thought to affect the dynamics of the second moment of these asset prices have to be considered as well. In this paper, we are interested in the correlation among the major exchange rates and hence we examine the direct central bank interventions (CBIs) in these markets. The gradual release of data relative to official CBIs has prompted the development of an extensive empirical literature concerned with the effects of these interventions (Dominguez and Frankel, 1993; Baillie and Osterberg, 1997; Dominguez, 1998; Beine et al., 2002). A significant part of this literature has attempted to assess the efficiency of CBIs by estimating their impact on the ex post dynamics of exchange rates. More precisely, these studies have investigated the effects of CBIs on exchange rate returns and their volatility. Most papers have relied extensively on univariate GARCH-type models and on distinguishing the various types of interventions (official vs. reported, coordinated vs. unilateral, dummies vs. amounts). The literature in general points out that CBIs are not very efficient, at least in the very short run. There is some limited evidence that interventions can affect the exchange rate level (Baillie and Osterberg, 1997). Nevertheless, attention has gradually shifted to the effects on higher moments and especially on the volatility of exchange rates (which was the main concern of the 1987 Louvre Agreement). The conclusions appear much more clear-cut with respect to exchange rate volatility. The literature on the whole emphasizes that there is a significant increase in volatility as a result of foreign exchange rate interventions carried out by the major central banks, namely the Federal Reserve (Fed), the Bundesbank (BB) and the Bank of Japan (BoJ).3 These studies cover periods of heavy central bank activity in the foreign exchange market, especially between 1985 and 1995. Given that the BoJ and the European Central Bank (ECB) have quite recently been enthusiastic about using CBIs, it is definitely worthwhile to update these estimates. Furthermore, the very recent release of official data by the BoJ allows us to estimate the impact of official interventions without resorting to the use of proxies. The main purpose of this paper is to assess the extent to which direct interventions by the major central banks have influenced the dynamics of covariances and correlations among exchange rates. To the best of our knowledge, such an empirical investigation has not been proposed in the existing literature. This paper hopes to reconcile the two extensive empirical literatures mentioned above, namely the empirical analyses aimed at measuring the impact of these CBIs on the dynamics of exchange rates, and the econometric approaches that permit the estimation of time-varying covariances between financial assets. Our approach allows to capture potential spillover effects and to bring further evidence in favor of the so-called signalling channel of CBIs. Understanding the link between CBIs and covariances may also be valuable, for instance, for forecasting purposes and thus for optimizing currency portfolios.4 Quite recently, robust stylized facts have been proposed by several authors (Andersen et al., 1999; Chesnay and Jondeau, 2000), emphasizing that covariances and correlations increase during periods of relatively high volatility. Since CBIs have in general been found to be a source of market uncertainty, one could expect some CBIs to be associated with a significant increase in the covariances. Our results tend to be consistent with these expectations, at least for concerted CBIs. The paper is organized as follows. Section 2 looks at the methodology used to capture the time-varying correlations between exchange rates and provides some striking evidence that the correlation and covariance between the yen (JPY) and the deutsche mark (DEM) – Euro (EUR) from 1999 on – are highly variable over time. Section 3 presents and discusses the CBI data. Section 4 reports the estimation results while Section 5 examines the various implications of these findings in terms of transmission channels of CBI, of short-run forecasting and of portfolio optimization. Section 6 concludes.

In this paper, we have provided evidence that CBIs in foreign exchange markets tend to influence the conditional correlation between the major exchange rates, that is, the Japanese yen and the Euro against the USD. Focusing on the period 1991–2001, we show that this impact not only increases the conditional variances but also accounts for a significant increase in the covariance. Hence, one can expect that failing to account for this direct impact could result in significant errors in the estimation and the forecasting of the correlations. The new spillover effects documented in this paper, both in terms of volatility and co-movement of exchange rates bring further empirical evidence in favor of the signalling channel of CBI. Estimates of the time-varying correlations between exchange rates are of overwhelming importance in numerous applications such as portfolio optimization and estimation of value-at-risk measures of currency portfolios. The results of this paper may therefore provide a framework for forecasting correlations between the major currencies. In this respect, our analysis shows that this can be used for the purpose of short-run currency portfolio optimization. This in turn raises the question whether CBIs can be predicted in the context of long-run forecasts of the correlations. Our estimation results suggest – given the Fed's recent intervention strategy of employing only coordinated interventions – that one should focus on Fed interventions in the JPY and EUR markets. This amounts to predicting when the Fed will follow the BoJ and/or the ECB to intervene simultaneously in the foreign exchange market. We leave this important issue for further research.