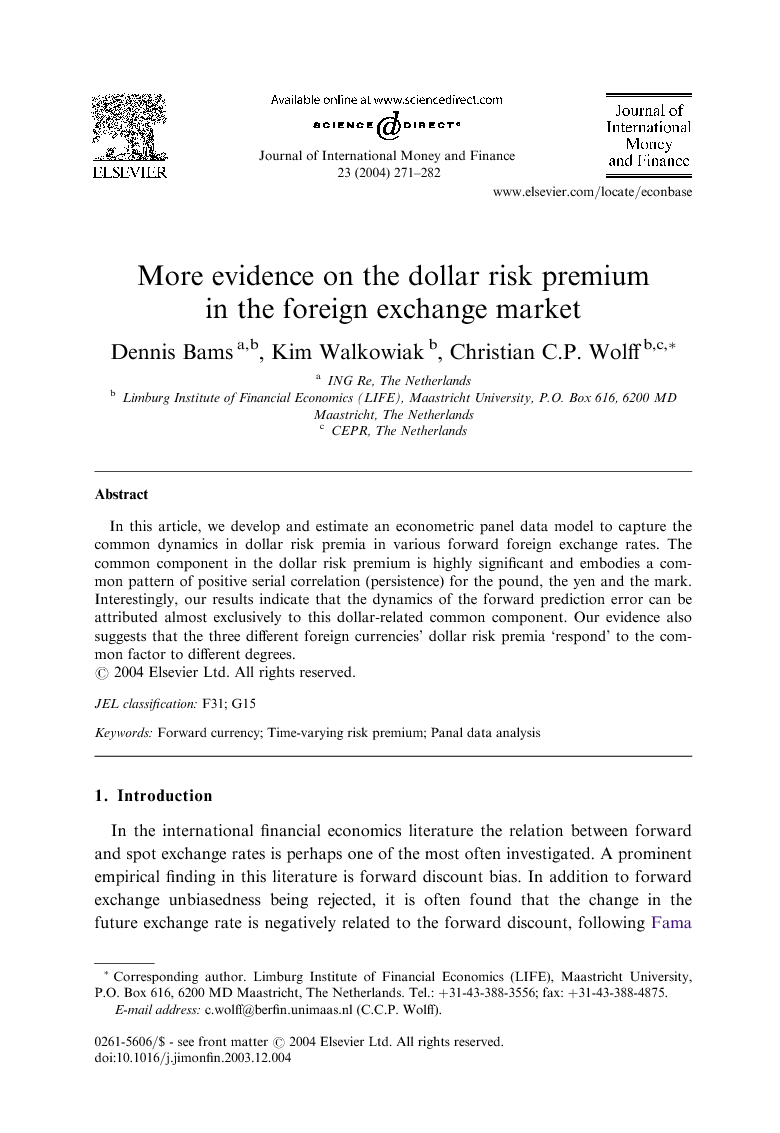 In this article, we develop and estimate an econometric panel data model to capture the common dynamics in dollar risk premia in various forward foreign exchange rates. The common component in the dollar risk premium is highly significant and embodies a common pattern of positive serial correlation (persistence) for the pound, the yen and the mark. Interestingly, our results indicate that the dynamics of the forward prediction error can be attributed almost exclusively to this dollar-related common component. Our evidence also suggests that the three different foreign currencies’ dollar risk premia ‘respond’ to the common factor to different degrees.

In the international financial economics literature the relation between forward and spot exchange rates is perhaps one of the most often investigated. A prominent empirical finding in this literature is forward discount bias. In addition to forward exchange unbiasedness being rejected, it is often found that the change in the future exchange rate is negatively related to the forward discount, following Fama (1984). Explanations for forward discount bias fall into two broad classes: (1) the presence of forecast errors and (2) the existence of time-varying risk premia. The first class, forecast errors, comprises statistical measurement problems and possible irrationality of expectations. Measurement difficulties arise when the distribution of shocks that effect the economy undergo infrequent shifts. Natural disasters and monetary policy regime changes are examples of such shifts. When market participants anticipate a future discrete shift in the policy, but this shift did not materialize within the sample period, the measurement problem is referred to as a peso problem, Krasker (1980). In the opposite case, when a shift has occurred and people learn about this change slowly, and therefore adapt their expectations slowly, it is called a learning problem, Lewis (1995). Irrationality of survey-based exchange rate expectations was first documented by Froot and Frankel (1989). Cavaglia et al. (1994) questioned the Frankel and Froot (1989) results and established that forward discount bias is attributable to both irrationality of expectations and time-varying risk premia. This brings us to the second class of explanations: the presence of time-varying risk premia in the pricing of forward foreign exchange, in a setting where expectations are assumed to be rational. Useful surveys in this area were provided by Hodrick (1987) and Engel (1996). Nijman et al. (1993) and Wolff (1987), using monthly data, demonstrated that low-order autoregressive (AR) models can represent the risk premium quite adequately. Their, and others’, measurements of risk premia show that they usually fluctuate around zero and that confidence intervals around these risk premia are large, partly due to parameter uncertainty in the risk premium models. In this paper, we will focus on the second class of explanations for forward discount bias. Our aim is to learn more about the properties of the risk premium. The risk premium, of course, is not directly observable and assumptions are required to learn about its properties. Conditional on the assumption of rational expectations, we will explore the properties of risk premia in the context of a common-factor panel data framework. This is achieved by a panel risk premium specification, in which the data for different currencies (all expressed in dollar values), are pooled and time variation in the risk premia for individual currencies relative to the dollar is driven by a single, common factor which is modeled as an AR(1) variate. We allow exchange rates to exhibit different exposures to this risk premium. Our approach allows us to focus on the dynamics of the risk premium directly, as opposed to the approach of Huisman et al. (1998), who tested for uncovered interest parity using a panel data model. The introduction of a common component in our model implies that possible other factors are treated as white noise. Interestingly, our empirical results lend support to this assumptions. The paper is presented in four sections. In Section 2 the model is set forth and the econometric framework is explained. In Section 3 the data are described and summary statistics are provided. Section 4 is devoted to the estimation results; here the implications for the risk premium are described in detail. Section 5 concludes.