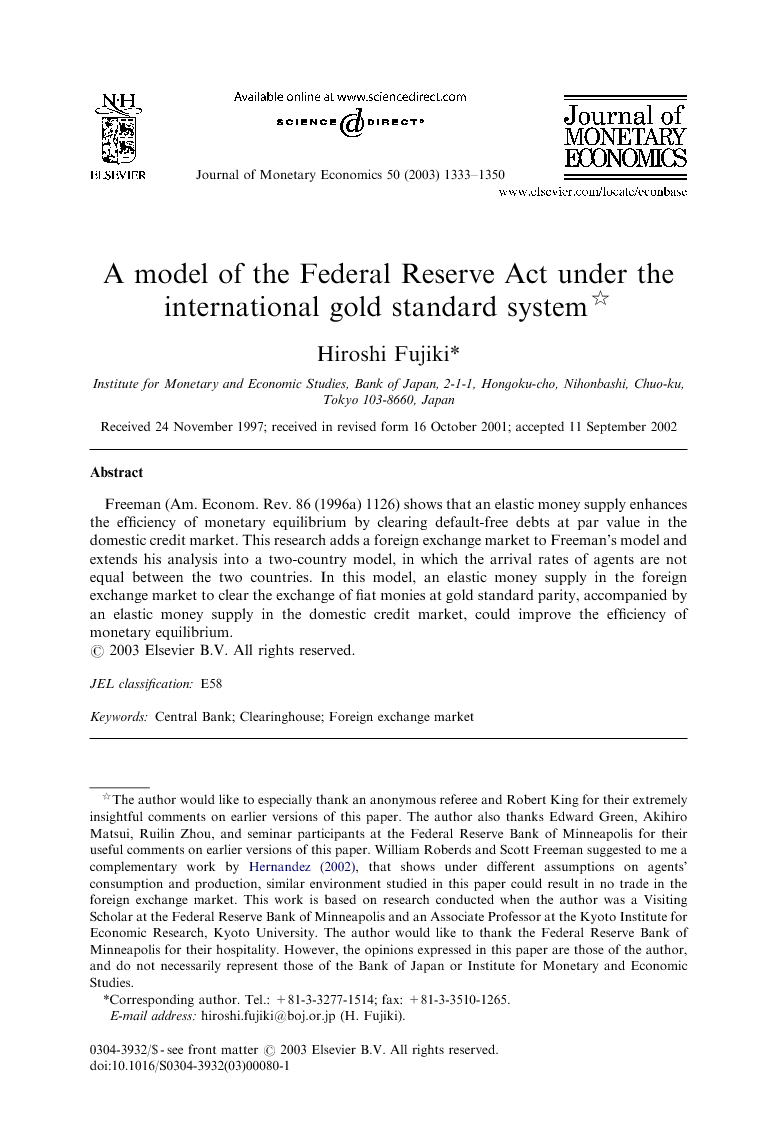 Freeman (Am. Econom. Rev. 86 (1996a) 1126) shows that an elastic money supply enhances the efficiency of monetary equilibrium by clearing default-free debts at par value in the domestic credit market. This research adds a foreign exchange market to Freeman's model and extends his analysis into a two-country model, in which the arrival rates of agents are not equal between the two countries. In this model, an elastic money supply in the foreign exchange market to clear the exchange of fiat monies at gold standard parity, accompanied by an elastic money supply in the domestic credit market, could improve the efficiency of monetary equilibrium.

The Federal Reserve Act of 1913 established a nationwide settlement system with a lender of last resort, aimed at preventing seasonal fluctuations in interest rates by supplying money elastically in accordance with the Real Bills Doctrine. Freeman 1996a and Freeman 1996b demonstrates why such a central bank operation is desirable in general equilibrium monetary models. He considers an economy where agents are spatially separated, and thus, private debt incurred between two parties can only be redeemed with fiat currency at a central clearing area. Suppose that the departure rate of creditors from the central clearing area is higher than the arrival rate of debtors. In this case, the amount of currency available at the central clearing area is less than the par value of debt, and late-departing creditors can buy the risk-free assets of early-departing creditors at discounted prices in exchange for fiat money. The resulting equilibrium will be liquidity-constrained. Suppose a central bank issues additional fiat money to purchase the IOUs of early-departing creditors, and receives fiat money from the debtors at the central clearing area. Then, the IOUs of early-departing creditors can be cleared at par value, and the money stock remains constant as long as this central bank takes the money received from the debtors in the second-hand debt market out of circulation. Such a central bank intervention leads to an optimal allocation of resources. By this reasoning, Freeman shows that an elastic money supply to smooth the seasonal fluctuations in the nominal interest rate in the short run, and a constant money supply in the long run, are consistent and desirable policies. As West (1974) argues, like the Real Bills Doctrine, the international gold standard system was an important foundation for the Federal Reserve Act of 1913. Therefore, this paper extends Freeman's model into a two-country model under gold a standard, and seeks additional policy implications. The analysis in this paper shows that an elastic money supply in both the domestic debt market and the foreign exchange market arranged by the central bank a la Freeman is required to enhance the efficiency of monetary equilibrium. More specifically, consider the two-country model of Freeman (1996a), in which old creditors are subject to taste shocks. They want to consume young foreign debtors’ goods in their second stage of life with a small probability. Suppose that old creditors know their preference for foreign goods only after their debt is settled in their domestic central clearing area. Due to the country-specific cash-in-advance constraint, old domestic creditors must pay foreign currency to obtain goods from young foreign debtors. Imagine the “turnpike” of Townsend (1980) that connects the central clearing areas of two countries. Old creditors with taste shocks travel this turnpike, and they meet old creditors coming from the other country at a trading post. They exchange their fiat money for the fiat money of the other country. Suppose that the arrival rates of old creditors with taste shocks to the trading post are not equal between two countries. For example, if one country is inhabited by many bankers (or late-departing creditors), only a small fraction of old creditors come to the foreign exchange market in the early stages of the market transaction. Then, the currency of a country with a large banking sector might be in short supply, compared with the gold standard parity. In such a situation, the fiat money of the other country, though its value is backed by gold, might be exchanged at a discount. This could happen despite the central bank intervention to clear all domestic debt at per value. Central bank intervention in the foreign exchange market could offset the deviation of the foreign exchange rate from the gold standard parity. Such an operation is incentive compatible for the central bank in the country with the large banking sector under the gold standard. This central bank can obtain foreign notes at a low price in the foreign exchange market from the early-departing old creditors. Moreover, it faces the chance of selling its domestic currency at a premium price in the foreign exchange market to the late-departing old creditors. After these operations, the domestic money supply increases temporarily by the amount of foreign exchange intervention. This central bank recognizes the risk of a currency attack, and hence it takes the extra fiat money from the foreign exchange intervention out of circulation. Does any private arrangement, as Green (1997) and Gorton and Mullineaux (1987) suggest, work as a substitute for central banks in a two-country setup? Private clearinghouses can do the same job as the central bank under the gold standard system with full redemption, because this institutional setup brings the total money supply back to a constant level by the end of the period. Other institutional setups might lead to equilibria subject to inflation or deflation. The organization of this paper is as follows. Section 2 discusses the details of a two-country model with a liquidity constraint. Section 3 analyses a stationary equilibrium. Section 4 discusses policy implications, and Section 5 concludes the paper.

This paper presents a two-country version of the model by Freeman (1996b). The model demonstrates that in order to enhance the efficiency of equilibrium in the face of liquidity shortage, central banks under the gold standard must supply fiat money elastically both in the domestic credit market and in the foreign exchange market. Such operations by the central banks are consistent with the rules of the game of gold standard summarized by McKinnon (1993). Those operations are also in line with the spirit of the 1913 Federal Reserve Act, whose external policy goal is based on the international gold standard, and whose domestic policy is based on the Real Bills Doctrine.