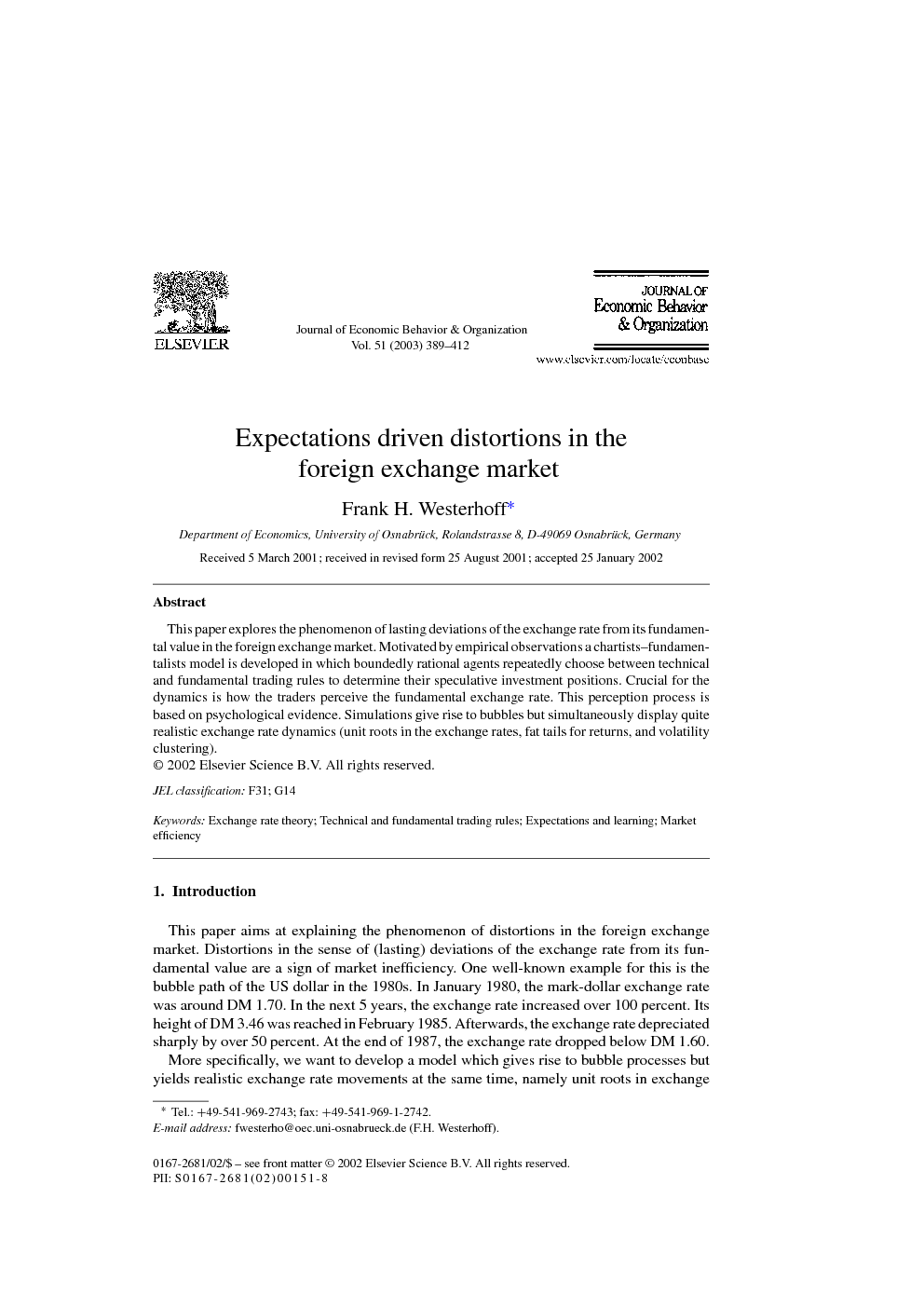 This paper explores the phenomenon of lasting deviations of the exchange rate from its fundamental value in the foreign exchange market. Motivated by empirical observations a chartists–fundamentalists model is developed in which boundedly rational agents repeatedly choose between technical and fundamental trading rules to determine their speculative investment positions. Crucial for the dynamics is how the traders perceive the fundamental exchange rate. This perception process is based on psychological evidence. Simulations give rise to bubbles but simultaneously display quite realistic exchange rate dynamics (unit roots in the exchange rates, fat tails for returns, and volatility clustering).

This paper aims at explaining the phenomenon of distortions in the foreign exchange market. Distortions in the sense of (lasting) deviations of the exchange rate from its fundamental value are a sign of market inefficiency. One well-known example for this is the bubble path of the US dollar in the 1980s. In January 1980, the mark-dollar exchange rate was around DM 1.70. In the next 5 years, the exchange rate increased over 100 percent. Its height of DM 3.46 was reached in February 1985. Afterwards, the exchange rate depreciated sharply by over 50 percent. At the end of 1987, the exchange rate dropped below DM 1.60. More specifically, we want to develop a model which gives rise to bubble processes but yields realistic exchange rate movements at the same time, namely unit roots in exchange rates, fat tails for returns, and volatility clustering. Further aims include modeling the perception of the fundamental exchange rate more explicitly than usual on the grounds of psychological evidence and finally separating some of the forces responsible for the distortions. Related behavioral finance research has already produced several papers which replicate some of the stylized facts of financial markets (Huang and Day, 1993, Lux, 1997, Brock and Hommes, 1997, Brock and Hommes, 1998 and Farmer, 1998). Moreover, the approach of Kirman (1991) is able to produce short-lived bubbles, whereas Frankel and Froot (1986) find an explanation for lasting bubbles. In their model, the bubble process is fed by a smoothly and slowly declining influence of the fundamentalists. The bubble path is at its turning point when the impact of the fundamentalists is at its minimum. In addition to the absence of typical time series properties, such a weighting scheme does not always hold. The starting point for our investigation is a simple chartists–fundamentalists model. Motivated by empirical observations, a model is developed where boundedly rational market participants choose between a technical and a fundamental trading rule to determine their speculative investment positions. This decision is repeated at the beginning of each new trading period. If one subscribes to the strong assumption that the agents are able to determine the true fundamental value of the exchange rate, then the exchange rate fluctuates in a complex way around its fundamental value. The computed time series mimic the behavior of major currencies quite closely. Besides some excess volatility, the foreign exchange market seems to be efficient. However, in this paper we try to go one step further and model the perception of the fundamental exchange rate more realistically. While the agents follow the news arrival process closely, mistakes in information processing occur. These mistakes are propagated over time since the agents tend to stick to their previously perceived fundamental value (anchor heuristic). If the agents believe that the exchange rate itself contains relevant information, they incorporate it into their “anchor” so that the exchange rate becomes even more disconnected from its true fundamental. Nevertheless, in the long-run the agents react to macroeconomic imbalances and adjust their perception. Through this learning procedure, the distortion eventually is corrected and some long-term mean-reversion sets in. Note that the results are not the outcome of strange exchange rate movements. On the contrary, the generated time series share some basic stylized facts with the empirical data. The paper is organized as follows. Section 2 presents a simple chartists–fundamentalists framework and discusses its time series properties. Adopting heuristics from the psychological literature, Section 3 modifies the perception of the fundamental exchange rate. This extension gives rise to bubble processes. Section 4 offers some conclusions.

To sum up, the aim of this paper is threefold: to develop a model that gives rise to bubbles but also delivers realistic exchange rate movements, to explore how the agents perceive the fundamental exchange rate, and to unravel the forces behind the distortions. The trading activity of the agents is described with the aid of an empirical micro-foundation. The interaction between the traders generates complex dynamics which display unit roots in the exchange rates, fat tails for returns and volatility clustering. Fundamental to this paper is the perception of the fundamental exchange rate. Psychologists claim that the agents behave according to the anchor and adjustment heuristic. Since the adjustment is typically incomplete and mistakes are propagated over time, the perceived value of the fundamental can strongly deviate from its true value even for longer periods. The degree of distortions depends on several forces. For instance, it increases with a higher systematic behavior of the chartists or decreases with a higher popularity of the fundamentalists. This paper is built on empirical evidence. However, we understand this paper only as one step to achieving a better linking between economic modeling and psychological evidence. What is needed is a better understanding of the human cognition process. How do the agents perceive and process information, how do they select an action, and how do they learn? Recent experiments along the lines of Hommes et al. (1999) hopefully provide better and more detailed empirical grounds for future research.