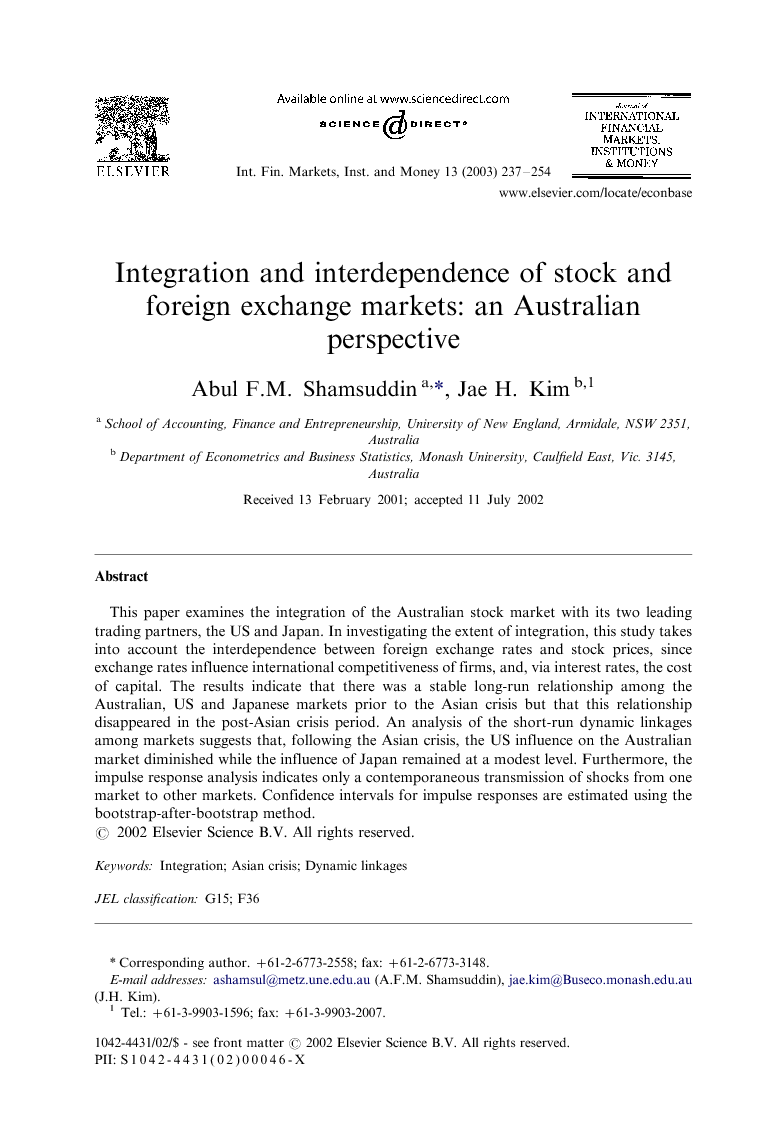 This paper examines the integration of the Australian stock market with its two leading trading partners, the US and Japan. In investigating the extent of integration, this study takes into account the interdependence between foreign exchange rates and stock prices, since exchange rates influence international competitiveness of firms, and, via interest rates, the cost of capital. The results indicate that there was a stable long-run relationship among the Australian, US and Japanese markets prior to the Asian crisis but that this relationship disappeared in the post-Asian crisis period. An analysis of the short-run dynamic linkages among markets suggests that, following the Asian crisis, the US influence on the Australian market diminished while the influence of Japan remained at a modest level. Furthermore, the impulse response analysis indicates only a contemporaneous transmission of shocks from one market to other markets. Confidence intervals for impulse responses are estimated using the bootstrap-after-bootstrap method.

Recent studies on the integration of the Australian stock market with major international markets (e.g., Ragunathan et al., 1999 and Janakiramanan and Lamba, 2000) ignore the interdependence of foreign exchange and stock markets. This paper takes into account the correlation between exchange rates and stock prices and investigates whether, and to what extent, the Asian crisis influenced both the long- and short-run intermarket relationships. More specifically, this study makes the following contributions. First, it examines the long-run relationship of stock prices for Australia, Japan and the US, and the Australian dollar value of the yen and US dollar using the cointegration approach. A cointegrating relationship among the variables in the system is found prior to the Asian crisis but no such relationship exists in the post-Asian crisis period. This result seems to indicate that prior to the Asian crisis financial prices in these countries were driven by a common international factor but after the Asian crisis the country-specific factors have become more important than the international factors, leading to lack of comovement in financial prices. Second, it employs multivariate time series models to analyse the dynamics of the system. The results indicate that in the pre-crisis period, the Australian stock market was primarily led by the US stock market (as opposed to Japan), however, in the post-crisis period, the Australian stock market has become more dependent upon its own past and less on the US stock market. Third, this paper observes that stock returns are led by foreign exchange rates but that the former do not significantly influence the latter. Finally, an impulse response analysis was conducted to investigate the transmission of a price shock from one market to other markets. The results reveal a quick transmission of shocks among the stock markets both before and after the Asian crisis. Thus, in spite of some evidence of lack of cointegration (long-run comovements) in financial prices in the post-Asian crisis period, the short-term linkages among markets have remained strong.