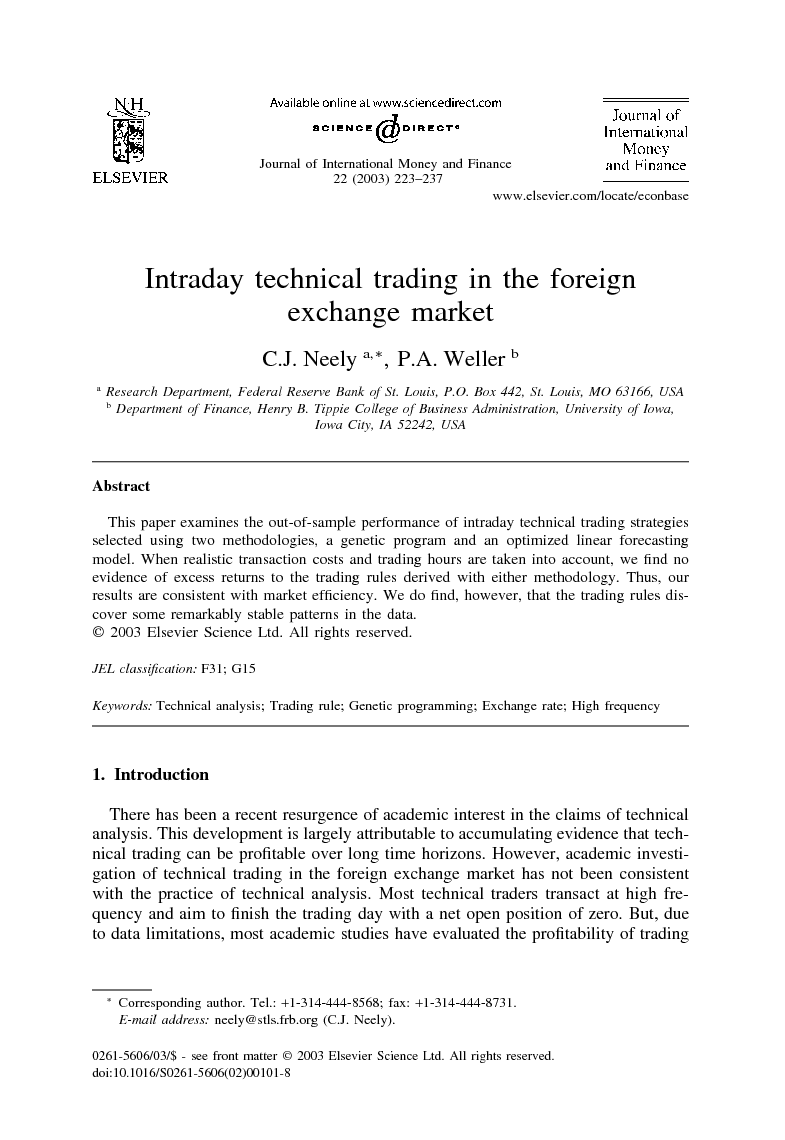 This paper examines the out-of-sample performance of intraday technical trading strategies selected using two methodologies, a genetic program and an optimized linear forecasting model. When realistic transaction costs and trading hours are taken into account, we find no evidence of excess returns to the trading rules derived with either methodology. Thus, our results are consistent with market efficiency. We do find, however, that the trading rules discover some remarkably stable patterns in the data.

There has been a recent resurgence of academic interest in the claims of technical analysis. This development is largely attributable to accumulating evidence that technical trading can be profitable over long time horizons. However, academic investigation of technical trading in the foreign exchange market has not been consistent with the practice of technical analysis. Most technical traders transact at high frequency and aim to finish the trading day with a net open position of zero. But, due to data limitations, most academic studies have evaluated the profitability of trading strategies on daily or weekly data (Dooley and Shafer, 1983, Sweeney, 1986, Levich and Thomas, 1993 and Neely et al., 1997). These papers find that trading rules earn significant excess returns, net of transaction costs, which cannot be easily explained as compensation for bearing risk. The trading frequency for the rules studied in these papers typically ranges from 3 to 26 trades per annum. Evidently, these are not the trading strategies being used by the foreign exchange dealers surveyed by Taylor and Allen, 1992 and Cheung and Chinn, 2000 and Cheung et al. (2000). These studies document the fact that technical analysis is widely used for trading at the shortest time horizons, namely, days and weeks, and that its use may be increasing. But, despite their practical importance, there has been relatively little study of high-frequency trading rules. Goodhart and Curcio (1992) consider the usefulness of support and resistance levels published by Reuters. Osler (2000) looks at support and resistance levels published by six firms over 1996–1998 and finds significant evidence of power to predict intraday trend reversals. But she does not investigate whether it is possible to trade profitably on the basis of the signals net of transaction costs. Osler (Federal Reserve Bank of New York, unpublished, 2001) examines the potential importance of conditional orders for exchange rate dynamics and technical analysis. Acar and Lequeux (Banque Nationale de Paris, London Branch, unpublished, 1995) examine the profitability of a class of linear forecasting rules fitted to a sample of half-hourly data, whereas Curcio et al. (1997) examine the performance of filter rules that have been identified by practitioners. None of these papers finds evidence of profit opportunities. Pictet et al. (Olsen & Associates, unpublished, 1996) employ a genetic algorithm to optimize a class of exponential moving average rules. They run into serious problems of overfitting, and their rules perform poorly out-of-sample. Gençay et al. (Olsen & Associates, unpublished, 1998) report 3.6–9.6% annual excess returns, net of transaction costs, to proprietary real-time Olsen and Associates trading models using seven years of exchange rate data at a 5-minute frequency. It is difficult to compare other results with theirs, given that their models are not publicly available. This paper follows trading practice more closely than most past research by investigating the performance of trading rules using high-frequency data that allow the rules to change position within the trading day1. We examine the performance of the trading rules to measure market efficiency, an approach first advocated in Brock et al. (1992), rather than to find profitable rules, per se. We use an in-sample period to search for ex ante optimal trading rules and then assess the performance of those rules out-of-sample. Two distinct methodologies are employed: the first is a genetic program that can search over a very wide class of (possibly nonlinear) trading rules; the second consists of linear forecasting models, which provide natural benchmarks against which to compare the genetic programming results. The analysis does not specify the type of trader who might use such rules, but does assume that the trader faces reasonably low transaction costs. There is strong evidence of predictability in the data as measured by out-of-sample profitability when transaction costs are set to zero. However, the excess returns earned by the trading rules are very sensitive to the level of transaction costs and to the liquidity of the markets. When reasonable transaction costs are taken into account and trading is restricted to periods of high market activity, there is no evidence of profitable trading opportunities. Thus, our results are consistent with the efficient markets hypothesis. We must qualify our results, however, by pointing out that failing to find profitable rules with these methods does not guarantee that such rules do not exist. Specifically, certain rules that are used in practice, such as those which exploit the tendency of support and resistance levels to cluster at round numbers, might be very difficult to generate using our methodology (Osler, 2001, unpublished). Indeed, even if it is theoretically possible that the genetic program could construct certain types of rules, experience using the technique on other problems has shown that lack of computational power or insufficient data may preclude the discovery of certain rules in practice.

We find very stable predictable components in the intraday dollar exchange rate series for all the currencies we consider—German mark, Japanese yen, Swiss franc and British pound. But neither the trading rules identified by the genetic program nor those based on the linear forecasting model produce positive excess returns once reasonable transaction costs are taken into account and trade is restricted to times of normal market activity. Rules based on the autoregressive forecasting model perform about as well or better than those found by the genetic program, indicating that our results are largely attributable to the low-order negative serial correlation in the data. A number of authors have found negative first-order autocorrelation in exchange rate returns at various high-frequency horizons and some have offered explanations. Baillie and Bollerslev (1991) claim that nonsynchronous trading is responsible for the negative autocorrelation in hourly data. This explanation is implausible for our data set. For example, the nonsynchronous trading model of Lo and Mackinlay (1990) implies negative autocorrelation several orders of magnitude smaller than that actually observed. Zhou (1996) suggests that negative autocorrelation in tick-by-tick data is a consequence of “errors in data” and “screen fighting.” Again, we find neither explanation convincing in our (lower-frequency) half-hourly data. Screen fighting effects are unlikely to persist for so long. Another potential explanation is provided by Danielsson and Payne (2001), who document differences between indicative quotes of the type used here and firm interdealer quotes at very high frequencies. These differences disappear, however, as one samples returns at five- (or more) minute intervals. Therefore, it appears to be an unlikely explanation for autocorrelation in 30-minute returns7. Further, it is not clear to us that one should prefer firm interdealer quotes for a study of technical analysis. Dealers make their money on spreads, and indicative quotes may provide a more accurate picture of the terms on which a non-dealer can trade. A further problem is that long spans of firm interdealer quotes are not available for study. What we have shown is that it is unnecessary to assume that the negative autocorrelation is an artifact. If it is a true feature of the data, it is too small to be exploited by non-dealers to make speculative excess returns. This conclusion highlights the importance of going beyond simple evidence of predictability in order to assess market efficiency. A striking feature of our results is that the break-even transaction costs generally converge to a level close to that faced by a large institutional trader, namely, 2 to 3 basis points per one-way trade. These conclusions are based on an analysis of round-the-clock trading. If we restrict trading to occur during a 12-hour window of high volume, break-even transaction costs are considerably reduced. It is interesting that the foreign exchange market displays very different characteristics at different trading horizons. At weekly and monthly horizons there is strong evidence to indicate significant and persistent trends; but, as we show here, this is not the case at intraday horizons, at least for the sample period we consider. This may be a consequence of the uneven division of capital allocated to financing trade at different horizons. Although no precise figures are available, there is little doubt that a much greater volume of transactions is accounted for by traders who close their positions at the end of each day than by those who take open positions with horizons of weeks or months.