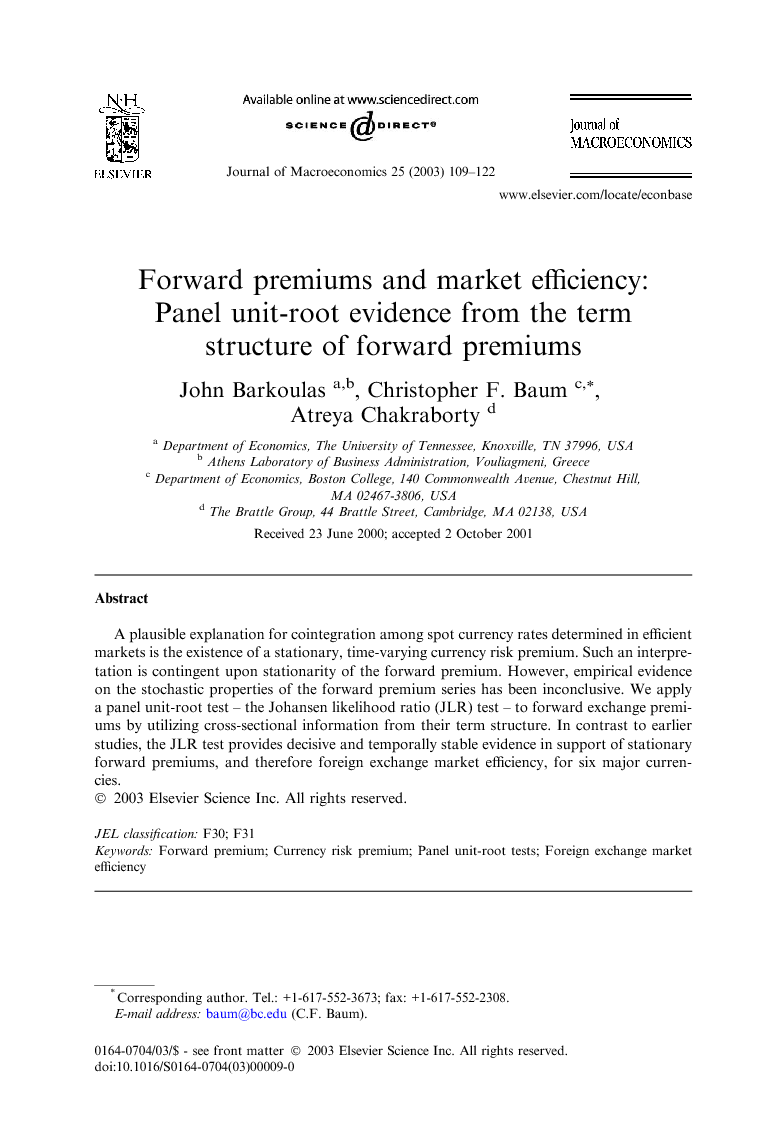 A plausible explanation for cointegration among spot currency rates determined in efficient markets is the existence of a stationary, time-varying currency risk premium. Such an interpretation is contingent upon stationarity of the forward premium. However, empirical evidence on the stochastic properties of the forward premium series has been inconclusive. We apply a panel unit-root test – the Johansen likelihood ratio (JLR) test – to forward exchange premiums by utilizing cross-sectional information from their term structure. In contrast to earlier studies, the JLR test provides decisive and temporally stable evidence in support of stationary forward premiums, and therefore foreign exchange market efficiency, for six major currencies.

The weak-form efficiency hypothesis of foreign exchange markets presents testable implications for the time series behavior of systems of spot currency rates.1 Researchers’ empirical findings of cointegration in systems of spot exchange rates (Alexander and Johnson, 1992; Lopez, 1996; Baillie and Bollerslev, 1989 and Baillie and Bollerslev, 1994a, inter alia) would seem to contradict the market efficiency hypothesis, since a cointegrated system necessarily implies the presence of predictability of returns in at least one currency.2,3 Does the existence of cointegration among spot rates imply a rejection of the market efficiency hypothesis?4Crowder (1994) argues that the cointegrating relationship may merely reflect a common feature: a time-varying currency risk premium evident in several currencies’ returns.5 Under conditions of risk aversion, foreign exchange market efficiency implies that a time-varying risk premium must share the same stochastic properties with the error-correction term from the cointegrated system, that is, it must be covariance stationary. Since the risk premium is unobservable, its stochastic properties cannot be directly ascertained, but it can be shown that they depend on the order of integration of the forward premium. Therefore, the finding of a stationary forward premium would directly imply stationarity of the currency risk premium, which would be compatible with the temporal behavior of the error correction term from a cointegrated system of spot exchange rates. Our investigation of the foreign exchange market efficiency hypothesis thus proceeds from a study of the stochastic properties of forward premiums. The empirical evidence on the stochastic properties of forward premiums is decidedly mixed. Using daily data for four currencies, Crowder (1992) finds that forward premium series are nonstationary processes. Crowder (1994) confirms such unit-root evidence for monthly forward premium series for three currencies, and concludes that the data do not support the market efficiency hypothesis. Luintel and Paudyal (1998) find daily forward premium series for five currencies to be realizations of unit-root processes, while Horvath and Watson (1995) and Clarida and Taylor (1997) reach the conclusion that forward premiums are stationary processes. Baillie and Bollerslev (1994b) report that the forward premium series are best characterized as neither I(1) nor I(0) processes, but as fractionally integrated processes. In this paper, we place this issue in sharper contrast by employing more powerful tests of the stationarity hypothesis for forward premium series. The contradictory findings in the literature may reflect the well-known limited power of conventional unit-root tests against stationary alternatives in small samples. In contrast, we evaluate these relationships by employing a panel unit-root test. Compared with individual time series, panels of series contain more observations and greater total series variation. We strengthen the power of our tests by utilizing the cross-sectional information available in the term structure of forward exchange premiums. To test the unit-root hypothesis, we employ the Johansen likelihood (JLR) test, a multivariate unit-root test recently proposed by Taylor and Sarno (1998), which offers important methodological advantages over first-generation panel unit-root tests. Applying the JLR test to daily observations for six major currencies over panels of 1-, 3-, 6- and 12-month contract maturities, we obtain decisive and temporally stable rejections of the unit-root hypothesis for forward exchange premiums. This evidence stands in sharp contrast to the mixed empirical findings in the literature, and is consistent with foreign exchange market efficiency under conditions of risk aversion. The plan of the paper is as follows. Section 2 presents the analytics of the forward premium and the implications of its stochastic structure for foreign exchange market efficiency. In Section 3, we present details of the test employed, while Section 4 presents our empirical findings. Conclusions and further implications for empirical research are discussed in the final section.

We apply the JLR test, a multivariate unit-root test, to panels of forward premium series that exploit dependencies in the term structure of forward exchange premiums, rather than cross-country variation. In contrast to much of the empirical literature, we find decisive evidence that the forward premiums for six major currencies (at all tenors considered) are stationary processes. We attribute the contradictory findings in previous studies to the low statistical power of the conventional, univariate unit-root tests they employed. Our findings have several implications. First, stationary forward exchange premiums help reconcile the cointegration of currency spot rates with the hypothesis of weak-form foreign exchange market efficiency (under risk aversion) à la Crowder (1994). The presence of common stochastic trends among spot exchange rates could serve as proxies for a currency risk premium. Second, given that the forward premium reflects the stochastic structure of the currency risk premium, our findings support stationary behavior for the risk premia of our sample currencies (relative to the US dollar), which is justifiable on theoretical grounds.17 Finally, domestic and foreign nominal interest rate differentials are stationary processes, given the covered interest rate arbitrage condition in the international financial markets.