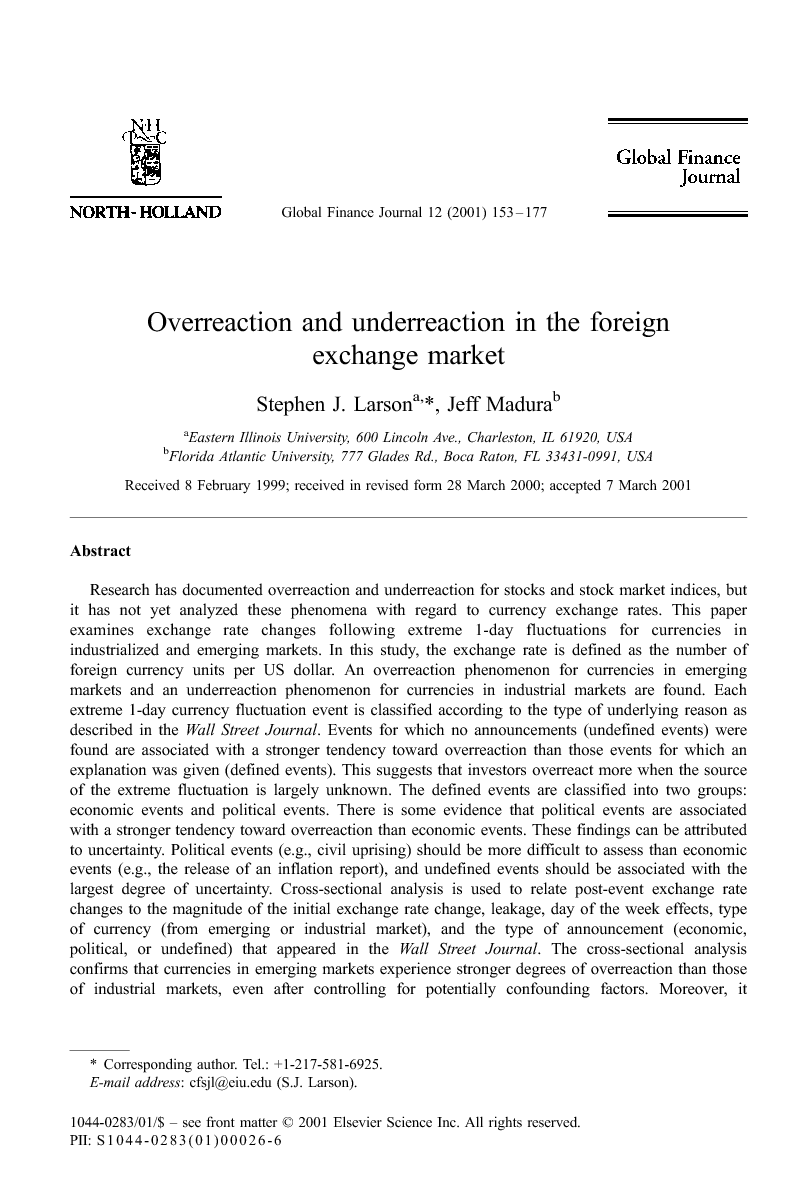 Research has documented overreaction and underreaction for stocks and stock market indices, but it has not yet analyzed these phenomena with regard to currency exchange rates. This paper examines exchange rate changes following extreme 1-day fluctuations for currencies in industrialized and emerging markets. In this study, the exchange rate is defined as the number of foreign currency units per US dollar. An overreaction phenomenon for currencies in emerging markets and an underreaction phenomenon for currencies in industrial markets are found. Each extreme 1-day currency fluctuation event is classified according to the type of underlying reason as described in the Wall Street Journal. Events for which no announcements (undefined events) were found are associated with a stronger tendency toward overreaction than those events for which an explanation was given (defined events). This suggests that investors overreact more when the source of the extreme fluctuation is largely unknown. The defined events are classified into two groups: economic events and political events. There is some evidence that political events are associated with a stronger tendency toward overreaction than economic events. These findings can be attributed to uncertainty. Political events (e.g., civil uprising) should be more difficult to assess than economic events (e.g., the release of an inflation report), and undefined events should be associated with the largest degree of uncertainty. Cross-sectional analysis is used to relate post-event exchange rate changes to the magnitude of the initial exchange rate change, leakage, day of the week effects, type of currency (from emerging or industrial market), and the type of announcement (economic, political, or undefined) that appeared in the Wall Street Journal. The cross-sectional analysis confirms that currencies in emerging markets experience stronger degrees of overreaction than those of industrial markets, even after controlling for potentially confounding factors. Moreover, it confirms that undefined events experience stronger degrees of overreaction than defined events, even when controlling for other factors.

Exchange rates reflect the price of one currency in terms of another, whereby the price should account for any relevant information about factors pertaining to the present or impending exchange of the two currencies. Yet, the price of a currency, like the price of other assets traded in financial markets, is partially determined by rumors and other unconfirmed information. Therefore, the response in the price of a currency to new information may be excessive or insufficient, and therefore require a correction. To the extent that there is a systematic correction to a particular type of information, the response in price reflects a bias. The objective of this study is to determine whether exchange rates respond properly to information. While the information is not always observable, extreme exchange rate adjustments are focused on, and these imply a response to information. If the exchange rate adjustments for these events are unbiased, there should not be a correction following the initial adjustment. Overall, the evidence suggests that there is a systematic correction for exchange rate adjustments for particular types of currencies, and particular types of announcements about those currencies. In this study, exchange rates are defined as the number of foreign currency units per US dollar. A loser refers to when the US dollar depreciates against a foreign currency by an extreme amount in 1 day and a winner refers to when the US dollar appreciates against a foreign currency by an extreme amount in 1 day. The concept of under- or overreaction of asset prices has been assessed in several recent studies. DeBondt and Thaler (1985) were the first to present evidence of stock price overreaction. They partitioned stocks into 10 portfolios based on 3 years of performance, and found that the lowest decile outperformed the highest decile by 24.6% during the subsequent 3-year period. DeBondt and Thaler (1987) reexamined investor overreaction while controlling for firm size and differences in systematic risk, and still found evidence that supported the overreaction hypothesis (Hypothesis 1). They also examined the January effect and determined that unusual returns in January could have influenced the results in favor of the overreaction hypothesis (Hypothesis 1). Several studies Akhigbe et al., 1998, Atkins & Dyl, 1990, Bremer & Sweeney, 1991, Brown et al., 1988, Cox & Peterson, 1994, Howe, 1986 and Peterson, 1995 examined post-event abnormal returns pursuant to extreme, 1-day stock price changes for US stocks. Support for the overreaction, underreaction, and efficient markets hypotheses are found in these studies. Thus, the results from these studies are inconclusive. Two studies examine overreaction and underreaction relating to stock market indices. These studies should be more relevant to the study at hand since the same type of information (major economic and political events) causes major changes in both stock market indices and exchange rates. Brown et al. (1988) found that extreme declines in the CRSP index are followed by reversals, but extreme increases in the CRSP index do not violate the efficient markets hypothesis (Hypothesis 3). Ajayi and Mehdian (1994) studied investor overreaction to unexpected news across major international stock markets. Their objective was to test the overreaction—and uncertain information—hypotheses for eight international stock market indices. The results of their study were mixed in that support for each of the overreaction, underreaction, and efficient markets hypotheses was found. These studies suggest that the full impact of macroeconomic events is not immediately reflected in stock prices. The objective of this study is to determine whether extreme 1-day exchange rate adjustments fully reflect new information, or are they systematically biased. The evidence suggests that extreme 1-day adjustments in exchange rates are associated with a stronger tendency toward overreaction for emerging market currencies than for industrial market currencies, and extreme exchange rate adjustments that are not driven by publicized events (undefined events) are more likely to reflect overreaction than defined events. These results hold even when controlling for other factors. In addition, the evidence suggests that the degree of overreaction varies according to the magnitude of the initial exchange rate change and the degree of information leakage. The remainder of this paper is organized as follows. Section 2 describes the research hypotheses, Section 3 explains the research design, Section 4 discloses the results, and Section 5 provides a summary.