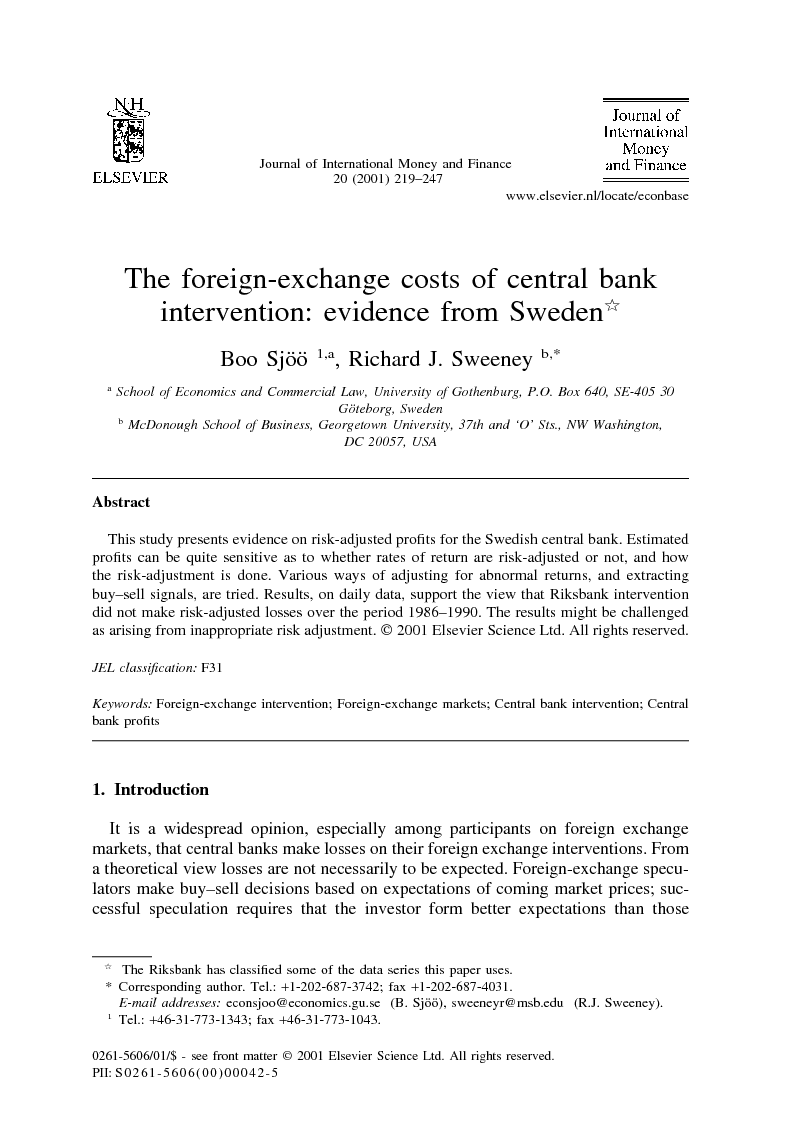 This study presents evidence on risk-adjusted profits for the Swedish central bank. Estimated profits can be quite sensitive as to whether rates of return are risk-adjusted or not, and how the risk-adjustment is done. Various ways of adjusting for abnormal returns, and extracting buy–sell signals, are tried. Results, on daily data, support the view that Riksbank intervention did not make risk-adjusted losses over the period 1986–1990. The results might be challenged as arising from inappropriate risk adjustment.

It is a widespread opinion, especially among participants on foreign exchange markets, that central banks make losses on their foreign exchange interventions. From a theoretical view losses are not necessarily to be expected. Foreign-exchange speculators make buy–sell decisions based on expectations of coming market prices; successful speculation requires that the investor form better expectations than those contained in current market prices. Similarly, it can be argued that central banks are able to make profits on their interventions because they are better informed than speculators on coming government policies, for example, their own money-supply or interest-rate policies. Unlike speculators, central banks may consciously pursue policies that lead to losses. For example, a number of central banks describe their intervention policies as ‘leaning against the wind’. Some observers argue that if intervention is used not to affect coming equilibrium rates but merely to reduce the speed at which the rate adjusts to equilibrium, the central bank may be expected to make losses on its intervention (Corrado and Taylor, 1986). These observations lead to the question whether central banks are able to break the strong-form market efficiency condition and make significant profits (or losses) when taking account of transaction costs and compensation for risk. Friedman (1953) argues that for central bank intervention to be stabilizing for the foreign-exchange market, intervention must make trading profits. Authors disagree over whether speculation is stabilizing and whether profits are useful in assessing a central bank's foreign-exchange market performance. If the central bank cannot affect the exchange rate, intervention may be profitable but not stabilizing (Dominguez and Frankel, 1993). Some authors provide theoretical examples of profitable but destabilizing intervention (Baumol, 1957 and Kemp, 1963). Others point out that central banks have goals beyond exchange-market stabilization or profits (Bank of England, 1983), and that a bank may successfully pursue its goals even at the expense of intervention losses (Edison, 1993). Thus, in a broader context Friedman's conclusion, that stabilizing intervention yields profits, need not hold. Measuring intervention profits therefore becomes a question of quantifying the foreign-exchange costs of central bank intervention policy rather than assessing its stabilizing effects. Evidence on intervention profitability is mixed (Sweeney, 1997 provides a review). Taylor, 1982a and Taylor, 1982b and Schwartz (1994) present evidence that central banks make substantial intervention losses. Argy (1982), Bank of England (1983) and Jacobsen (1983) present evidence of profits; Corrado and Taylor (1986) rebut this evidence. Jacobsen (1983) and Leahy (1989) argue that Taylor's profit measure is flawed: it is sensitive to interest rates earned on the central bank's domestic- and foreign-asset holdings, as are also the test-period's beginning and ending dates. Using versions of Taylor's measure modified to take account of interest rates, Leahy, 1989 and Leahy, 1995 and Fase and Huijser (1989) present evidence that central bank intervention is profitable. Sjöö and Sweeney (1996) argue that none of these studies appropriately accounts for the premium that a central bank earns from intervention as compensation for being exposed to foreign-exchange risk, though authors previously noted that risk premia may explain part of estimated profits (Leahy, 1989 and Leahy, 1995). They provide a method for finding risk-adjusted profits from central bank intervention. Using their measures, this paper estimates the risk-adjusted profits/losses of Riksbank intervention with daily data from 1986–1990. The Swedish experience is of substantial interest. Sweden is a small, open, highly industrialized economy. Over the period studied, Sweden pegged to a basket of currencies, within a band, a popular strategy for exchange-rate management. This strategy required frequent and substantial intervention. The Riksbank intervened on almost 60 percent of the days in our sample, while the Fed, in contrast, intervened on little more than 20 percent of the days over the period 1985–1991 (Sweeney, 2000). On its heaviest intervention day, the Riksbank bought SEK 11.16 billion worth of foreign currency (for sales, the heaviest was SEK 6.29 billion). In comparison, the maximum Fed intervention on a single day was USD .797 billion. If an average exchange rate of SEK 6 per USD is used, maximum Riksbank intervention was more than twice as heavy for an economy with eight million people than the Fed's for an economy with 250 million people. Central banks uniformly argue that their interventions result in higher social welfare and many insist that their interventions are profitable (Bank of England, 1983, for example). Politically, a central bank making large or persistent losses risks losing some of its independence, and its executives may be dismissed (top executives of the Riksbank—the Swedish central bank—are government appointees serving fixed but renewable terms). Even if the executives are willing to accept losses they may have a difficult time convincing the public and the government that the losses result in higher social welfare. The Riksbank may well intervene on some occasions for broad, national economic goals even in the expectation of losses, for example, intervention to keep the basket of currencies within the preannounced target zone. For comparison, the Bank of England (1983) argues that its interventions are motivated in this way and that, in addition, it makes intervention profits. This paper does not try to adjust estimated intervention profits to include the economic value of whatever success intervention has in achieving such broader, national economic goals. The estimated risk-adjusted profits presented here can be thought of as those earned by a small investor who observes intervention and makes buy–sell decisions based on intervention. Key tests below assume the investor takes positions proportional to intervention. Overall, the results are consistent with the view that the Riksbank does not make risk-adjusted losses over the period 1986–1990; some observers might conclude that it makes positive risk-adjusted profits. Section 2 discusses Riksbank intervention policy and the data used here. The data are reasonable for present purposes if used with care; further, high-frequency intervention data are rare enough that using even imperfect data seems justified. Section 3 discusses methods of measuring intervention profitability. It shows the theoretical and practical importance of adjusting intervention losses/profits for risk premia. Section 4 presents estimates of Riksbank risk-adjusted profits. Finally, Section 5 offers a summary and some conclusions.

The evidence reported above suggests that an investor who uses Riksbank intervention as buy and sell signals does not make risk-adjusted losses. In this sense, Riksbank intervention is not associated with costs in terms of risk-adjusted losses. It might be argued that the Riksbank makes risk-adjusted profits. If the USD is taken as the intervention currency, the point estimate for risk-adjusted profits for the 1986–1990 period is positive, as are the estimates for 4 of the 5 years and the sum of the individual years' estimates. If the DEM is taken as the intervention currency, the results are more mixed and depend on whether risk-adjustment is done with mean or market-model adjustment. With mean adjustment, profits are positive for the whole period and every year. With market-model adjustment, whole-period profits are negative but yearly profits are positive in 4 of 5 years, as is the sum of profits. From its public statements, the Riksbank sometimes undertakes intervention to pursue broad social goals even in the expectation of making losses, for example, to improve overall macroeconomic performance. Because an outside observer cannot distinguish such cases, this paper's risk-adjusted profits estimates do not take account of different motives for intervention. The tests here depend both on the efficient markets hypothesis (EMH) and on the risk model used. The null is that the market embodies all the information available to the Riksbank, and is thus efficient conditioned on this information; hence, expected risk-adjusted intervention profits are zero. In this view, the Riksbank makes profits or losses only by chance. If one views the evidence as supporting the contention that the Riksbank makes risk-adjusted profits, a possible conclusion is that the markets for SEK are inefficient. Profits may arise from the Riksbank detecting occasions when there is a gap between the intervention currency's expected appreciation and the risk premium on that currency; in this case, Riksbank intervention may reduce the gap. Alternatively, the profits may arise from the Riksbank creating the gap by its intervention policies. As the introduction notes, the consensus in the literature is that intervention profits do not imply the intervention is stabilizing. It is well known that any test involving the EMH is a joint test of the risk model used and the EMH; the profits and lack of significant losses, reported above, could vanish if a more appropriate risk model were used. This paper shows that the conclusions of past work on the profitability of central-bank intervention rest on tests that do not take proper account of risk. When risk is taken into account, the results often are quite different from those obtained when risk is ignored. In particular, it is more difficult to find evidence of massive systematic economic losses from intervention. As noted, however, our results can be challenged as depending on inadequate risk models. Progress on evaluating intervention profitability therefore requires evidence that alternative risk models are superior to the ones that we use and that these alternative models significantly change empirical results. The debate is on a new level.