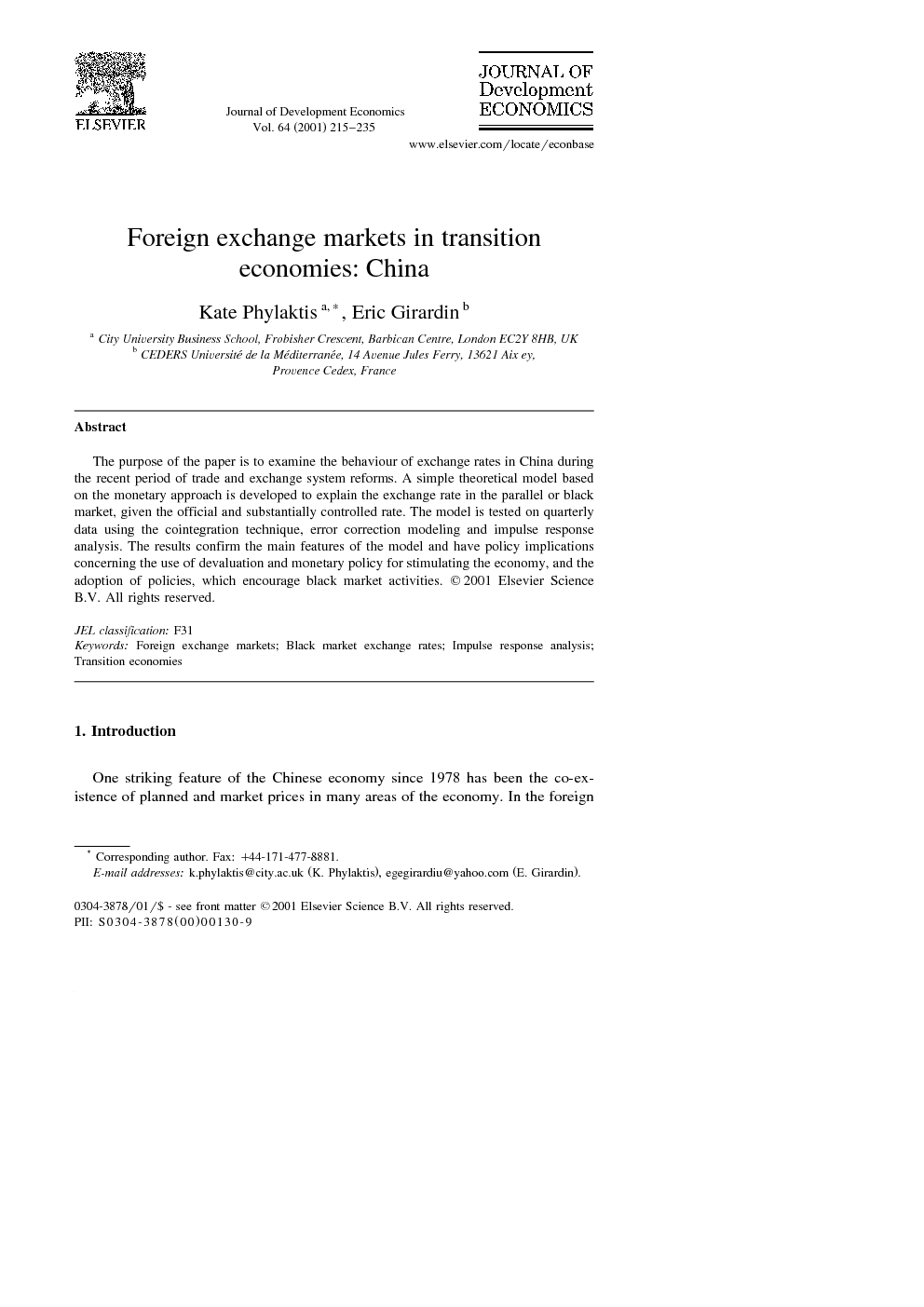 The purpose of the paper is to examine the behaviour of exchange rates in China during the recent period of trade and exchange system reforms. A simple theoretical model based on the monetary approach is developed to explain the exchange rate in the parallel or black market, given the official and substantially controlled rate. The model is tested on quarterly data using the cointegration technique, error correction modeling and impulse response analysis. The results confirm the main features of the model and have policy implications concerning the use of devaluation and monetary policy for stimulating the economy, and the adoption of policies, which encourage black market activities.

One striking feature of the Chinese economy since 1978 has been the co-existence of planned and market prices in many areas of the economy. In the foreign exchange market, three types of exchange rates have co-existed. The official rate, which was fixed and rarely changed; the swap rate, which was used by Chinese enterprises to swap their foreign exchange quotas and/or foreign currencies at a state determined rate by the Bank of China in selected cities, and which was less managed since 1988; and the black or parallel market rate, which was market-determined. The black market emerged because of the government's attempts to set the exchange rate and to monopolise access to and use of foreign currencies. In this paper, we concentrate on the behaviour of the black market rate since 1988. We develop a simple theoretical framework for a country, like China, with an underdeveloped financial system and where access to credit has been largely controlled by the state, limiting the possibilities for interest rate arbitrage. The model is within the class of monetary models to exchange rate determination, which have been initially developed for the official exchange rate.1 In our model the money market is what has been driving the black market rate. Such a framework is more suitable than the portfolio balance models, which emphasize amongst other factors portfolio considerations based on the interest rate differential.2 It is also considered more appropriate than the “smuggling and real trade models”, which emphasize the transactions demand for foreign exchange and analyse the impact of trade restrictions assuming away the portfolio motive completely.3 Although import tariffs existed in China, the average tariff rate was reduced substantially during the period of examination, from 29.2% in 1988 to 19.8% in 1996 (see World Bank, 1997). In contrast to the relaxation of tariffs, capital account inconvertibility has remained throughout the period of examination, encouraging agents to participate in the black market. The monetary approach framework applied in this study has the additional advantage of allowing one to examine the effects of monetary policy on the economy and the financial markets, which is a useful exercise in view of the emphasis on financial policies in post reform period. The paper contributes to the literature as follows. First, it is the first study of its kind which attempts to examine the interaction between the black market rate and the swap rate in China in recent times following the drastic economic and financial reforms. The swap rate was a more representative state rate for the period 1988 to 1993 than the official rate, since an increasing amount of transactions were channeled through that market. In 1994 the official rate and the swap rate were unified. Previous studies, such as that by Yin and Stoever (1994), have looked at the black market premium, defined as the spread between the black market rate over the official rate. They applied a version of the portfolio approach using ARIMA models over the period 1975 to 1992 and found that depreciation adjusted interest rate differential was not statistically important, while the real official exchange rate was. Second, we employ in our study the econometric technique of cointegration, which takes into account the non-stationarity of variables, to explore the long-run relationship between the black market rate, the swap rate and the monetary factors. Real output is allowed to play a role in the determination of the black market rate through the demand for real money balances. Furthermore, by examining the short-run dynamics of the model and applying impulse response analysis we find some interesting results concerning the interactions amongst the variables. For example, we explore the effects of a devaluation of the officially controlled rate on real output and the inflation differential, as well as the effects of the black market rate on the economy. We also gain an insight into the effectiveness of monetary policy. These results have policy implications concerning the use of devaluation and monetary policy for stimulating the economy, and the adoption of policies that encourage black market activities. The paper is structured as follows. In Section 2, we give an overview of the exchange markets in China. In Section 3, we present the model. In Section 4, we discuss some stylised facts on the black and swap exchange rates, present the empirical findings and consider their economic interpretation. In the Section 5, we give a summary and discuss some policy implications.

In this paper, we have examined the behaviour of exchange rates in China during the recent period of trade and exchange system reforms. We developed a simple theoretical model, which, although has limitations, e.g. not allowing for smuggling activity in the transactions demand for foreign currency, is found to explain relatively well the behaviour of the black market rate and its interactions with the economy. The following are some of the conclusions from our analysis. First, we found that there is a long-run relationship between the black market rate, the swap rate, Chinese output, US output and relative money supply. The two exchange rates are found to move in the same direction. Real output in both countries is found to affect the black market rate through the demand for money, a characteristic of monetary models compared to the balance of payments approach. In addition, an expanding money supply causes the black market rate to depreciate. Second, the error correction models have revealed a variety of interesting interactions between the variables. For example, the swap rate has been found to be weakly exogenous, while the black market rate, being market determined, adjusts to restore long-run equilibrium in the aftermath of a shock. At the same time, the black market rate return has a substantial negative effect on output growth. The results have also brought out the importance of the Pacific-Basin region for the US economy. Chinese output growth has a small effect on US growth. Finally, monetary policy is not affected by economic fundamentals but by political considerations. This latter result, however, could be sample dependent. As discussed in Yu (1997), bank credits and money aggregates were exogenously determined during tight money periods, but not during boom years. Our sample period is characterised by two restrictive periods, the first one started in September 1988 and the second in July 1993 and thus, our results might be dominated by these events. Third, the impulse response analysis highlights the effects of monetary and exchange rate policy. Monetary policy is not found to be neutral but to affect real output without raising relative inflation. At the same time, the inflationary pressures of devaluation are short-lived, while there is a long-term effect on real output. These empirical findings show that the inflationary consequences of China's exchange rate policy in the reforming years could not have been sizeable. This is also supported by the fact that the unification of the official and swap rates in 1994 did not have a big effect on the change of relative inflation. The moderate inflation cost of devaluation may enable the Chinese government to put more weight on external competitiveness. Our results imply that more efforts should be made to discourage black market activities because of its negative effect on real output. Further liberalisation of the foreign exchange market, for example lifting controls on capital flows, could reduce the motivation for participating in the black market. Such a recommendation, however, should be treated with caution for two reasons. First, it is based on the assumption that the officially measured output is a good proxy for the overall output, which includes smuggling activity. Secondly, it could make China prone to the same type of short-term volatile capital inflows which have proved extremely disruptive in most Asian countries. Furthermore, our findings indicate, subject to the caveats mentioned, that a more expansionary monetary policy stance in China might be a suitable antidote to the deflationary impact of the financial crisis which has swept the region since mid-1997. Devaluation, which could also be used since it has been found to have a long-term effect on output, could trigger another round of devaluations by the South East Asian countries with disastrous effects on the world economy.