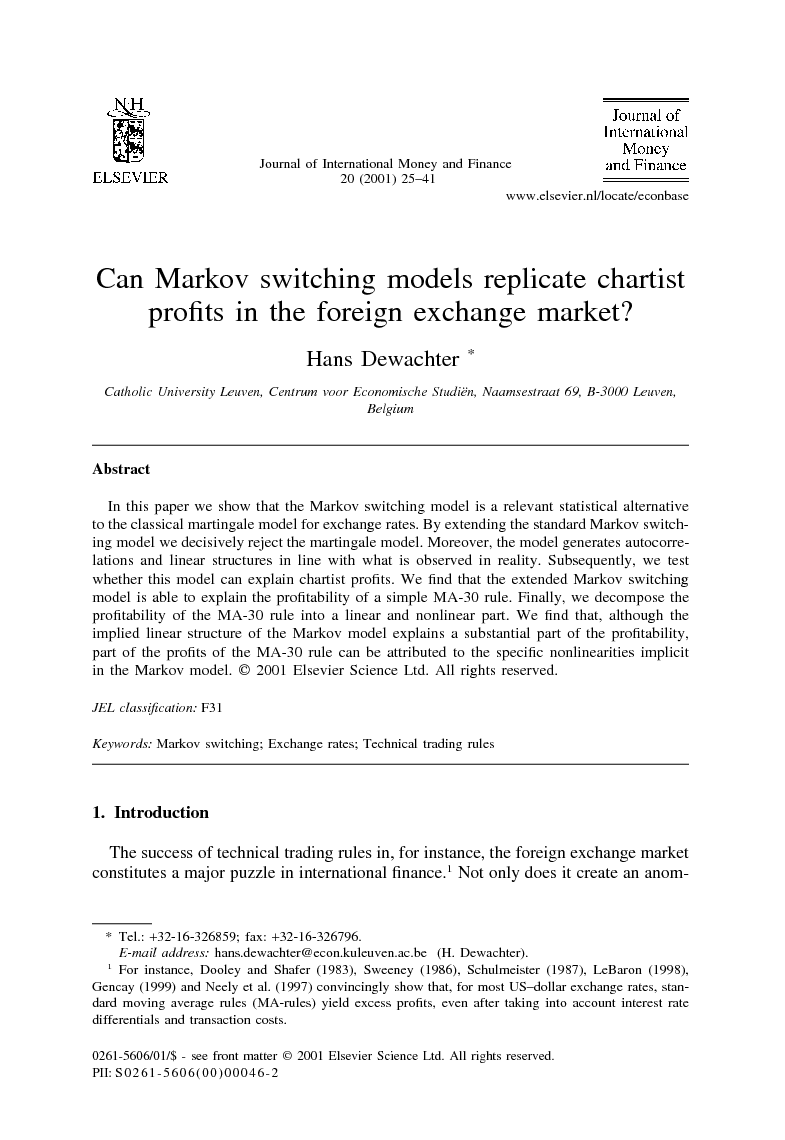 In this paper we show that the Markov switching model is a relevant statistical alternative to the classical martingale model for exchange rates. By extending the standard Markov switching model we decisively reject the martingale model. Moreover, the model generates autocorrelations and linear structures in line with what is observed in reality. Subsequently, we test whether this model can explain chartist profits. We find that the extended Markov switching model is able to explain the profitability of a simple MA-30 rule. Finally, we decompose the profitability of the MA-30 rule into a linear and nonlinear part. We find that, although the implied linear structure of the Markov model explains a substantial part of the profitability, part of the profits of the MA-30 rule can be attributed to the specific nonlinearities implicit in the Markov model.

This paper presented evidence against the martingale model for exchange rates. Unlike many other papers, we do not test versus unrestricted alternatives, but against the specific alternative of an extended Markov switching model. This model was chosen because of the fact that a priori it is close to the ideas of technical traders, who strongly believe in stochastic trends. We find convincing evidence against the martingale model and in favor of the Markov switching model. The Markov model could, in theory, explain about 5 to 10 percent of the exchange rate variability of the four major exchange rates (quoted versus the US dollar). In practice, however, forecastability turns out to be much lower ranging from zero to about 2 percent. While the extended Markov model and its linear projection do not perform very well in forecasting exchange rate changes, they turn out to be relatively reliable sign predictors. Each of these models outperforms the standard martingale model in both sign prediction and profitability. Also, the models did perform marginally better than the MA-30 trading rule. Moreover, using Monte Carlo simulations, we showed that the Markov model can replicate the observed profitability of the MA-30 trading rule. These results are, moreover, robust for various window sizes of the moving average. Although the evidence is somewhat weaker, one can also extend this conclusion to the linear ARMA(1,1) representation of the Markov model. This suggests that persistent stochastic trends account for a substantial part of the observed profitability. Nonlinear structures, cannot be left out, however, as they explain an additional 10 to 15 percent of the profitability of the MA-30 rule. The implications of the validity of the (extended) Markov switching model, however, are not confined to explaining profitability of technical trading rules. Two implications are worth mentioning. First, the estimates in this paper clearly show that high frequency exchange rates are characterized by `long swings'. The presence of these swings can fundamentally affect inferences concerning the risk premium in exchange rate returns and hence might affect econometric results based on imputed risk premia (see Evans and Lewis, 1995). These findings are especially relevant for the UIP-puzzle and warrant some additional research. Second, the finding of inert stochastic trends gives additional support to those models that incorporate learning behavior, heterogeneous agents or persistent but time varying risk premia.