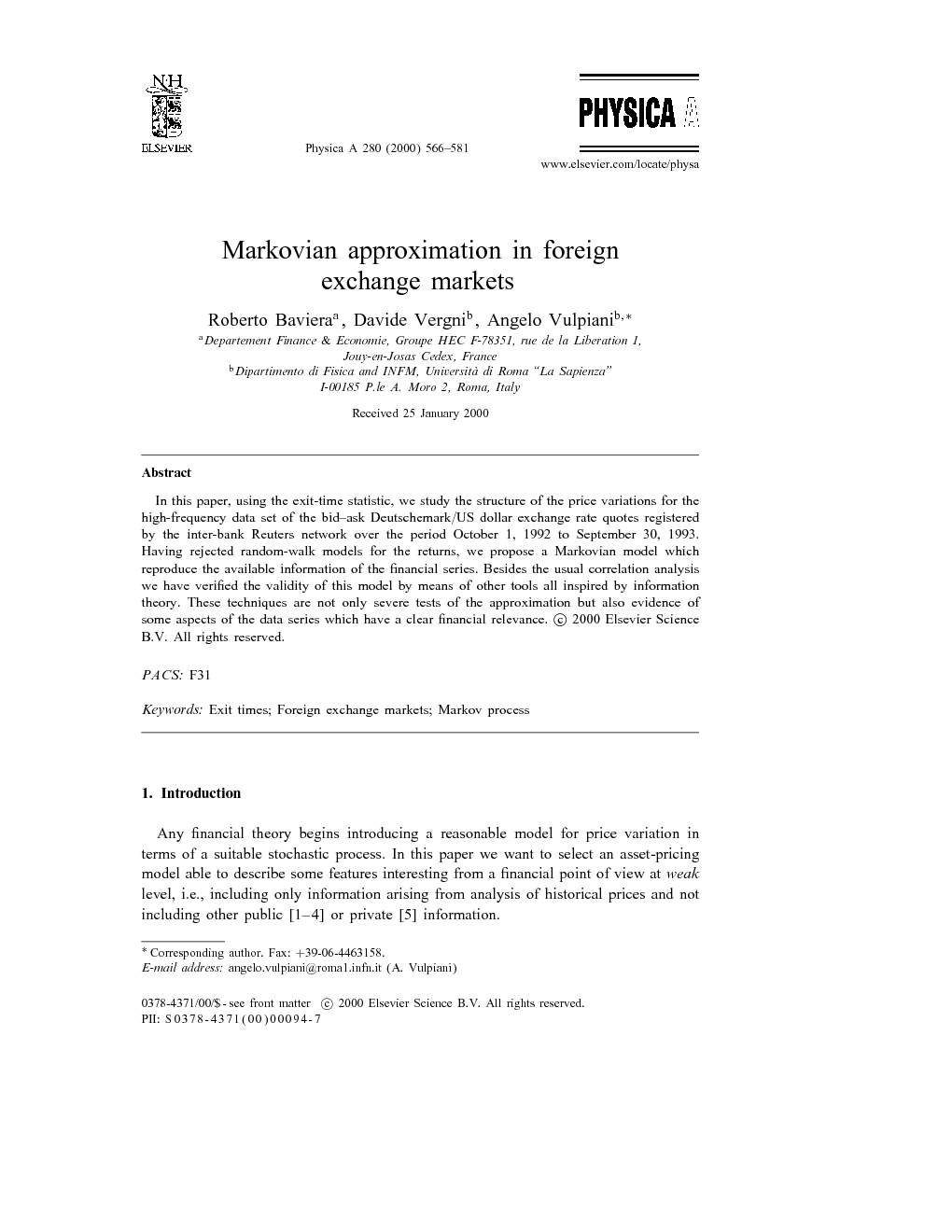 In this paper, using the exit-time statistic, we study the structure of the price variations for the high-frequency data set of the bid–ask Deutschemark/US dollar exchange rate quotes registered by the inter-bank Reuters network over the period October 1, 1992 to September 30, 1993. Having rejected random-walk models for the returns, we propose a Markovian model which reproduce the available information of the financial series. Besides the usual correlation analysis we have verified the validity of this model by means of other tools all inspired by information theory. These techniques are not only severe tests of the approximation but also evidence of some aspects of the data series which have a clear financial relevance.

Any financial theory begins introducing a reasonable model for price variation in terms of a suitable stochastic process. In this paper we want to select an asset-pricing model able to describe some features interesting from a financial point of view at weak level, i.e., including only information arising from analysis of historical prices and not including other public [1], [2], [3] and [4] or private [5] information. To attain such an aim we analyze the foreign exchange market because it presents several advantages compared with other financial markets. First of all it is a very liquid market. This feature is important because every financial market provides a single sample path, the set of the registered asset quotes. To be sure that a statistical description makes sense, a reasonable requirement is that this (unique) sequence of quotes is not dominated by single events or single trader's operations. A natural candidate for such (if possible) description is then a liquid market involving several billions of dollars, daily traded by thousand of actors. In addition, the foreign exchange market has no business time limitations. Many market makers have branches worldwide so trading can occur almost continuously. So in the analysis one can avoid to consider problems involved in the opening and closure of a particular market, at least as a first approximation. Finally, if one considers the currency exchange, the returns equation(1) View the MathML source are almost symmetrically distributed, where St is the price at the time t defined as the average between bid and ask prices. In this paper we investigate the possibility to describe the Deutschemark/US dollar exchange (the most liquid market) in term of a Markov process. We consider a high-frequency data set to have statistical relevance of the results. Our data, made available by Olsen and Associated, contains all worldwide 1,472,241 bid–ask Deutschemark/US dollar exchange rate quotes registered by the inter-bank Reuters network over the period October 1, 1992 to September 30, 1993. One of the main problems when analyzing financial series is that the quotes are irregularly spaced. In Section 2, we briefly describe some different ways to introduce time in finance, and we discuss why we choose the business time, i.e., the time of a transaction is its position in the sequence of the registered quotes. The history of the efforts in the proposal of proper stochastic processes for price variations is very long. An efficient foreign currency market, i.e., where prices reflect the whole information, suggests that returns are independently distributed. Following Fama [6] we shall call hereafter “random walk” a financial model where returns are independent variables. Without entering into a detailed review we recall the seminal work of Bachelier [7] who assumed (and tested) that price variations follow an independent Gaussian process. Now it is commonly believed that returns do not behave according to a Gaussian. Mandelbrot [8] has proposed that returns are Levy-stable distributed, still remaining independent random variables. A recent proposal is the truncated Levy distribution model introduced by Mantegna and Stanley [9] which well fits financial data, even considering them at different time lags. Since the financial importance of correlations in order to detect arbitrage opportunities (see Ref. [10] for a review and Ref. [11] for more recent results) it is essential to introduce a non-questionable technique able to answer to the question: can “random walk” models correctly describe return variations? In Section 2, we show that “random walk” is inadequate to describe even qualitatively some important features of price behavior. We measure the probability distribution of exit times, i.e., the lags to reach a given return amplitude Δ. This analysis not only shows the presence of strong correlations but also leads to a natural measure of time which is intrinsic of the market evolution, i.e., the time in which the market has such a fluctuation. Following Baviera et al. [11] we call this time Δ-trading time. In Section 3, measuring the time in Δ-trading time, we discuss the validity of a Markovian approximation for the market evolution. First, using the quotes, we build a Markovian model of order m, then, starting from the usual correlation function approach, we consider several techniques to verify the quality of this description. We also perform an entropic analysis, inspired by the Kolmogorov ε-entropy [12]. This kind of analysis is equivalent to consider a speculator who cares only of market fluctuation of a given size Δ [11]. Finally, we use other statistical tools to test the validity of such an approximation, namely the mutual information introduced by Shannon [13] and the Kullback entropy [14] which measures the “discrepancy” between the Markovian approximation and the “true” return process. The validity of the Markovian approximation not only implies the failure of all that models with independent increments (“random walk”), but give quantitative indications about the market inefficiency (neglecting transaction costs). In Section 4, we summarize and discuss the results attained.

In econometric analysis it is obviously relevant to test the validity of “random walk” models because of their strict link with market efficiency. In this paper we have first discarded “random walk” models as proper description of some features of the financial signal and then built a model considering the Deutschemark/US dollar quotes in the period from October 1, 1992 to September 30, 1993. We have developed a technique, based on the measure of exit times PDF, which allows us to reject the random walk hypothesis. The presence of strong correlations has been observed by means of an “anomalous” scaling of 〈τ〉 and the presence of a power-law behavior of the exit times probability density function PΔ(τ) for Δ>γTyp. This implies the failure of the “random walk” models where 〈τ〉 scales as Δ2 and the PΔ(τ) tail is exponential. We want to interpret γTyp as a natural cut-off due to the absence of a profitable trading rule for a patient investor with Δ less than γTyp: in this case profits are less than costs. We recall that a patient investor cares only of the quotes where it is present a price variation at least of a percentage Δ. The main advantage of this approach is that it shows that this class of models gives an inadequate description even at the qualitative level and it suggests a new point of view in financial analysis. Instead of considering an arbitrary measure of time we suggest to limit the analysis only at the times when something relevant from the financial point of view happens. In particular, we focus our attention on return fluctuations of size Δ. This analysis is equivalent to the behavior of a patient speculator. We show that the sign of the returns of such a sequence can be approximated by a Markovian model by means of several tests. We have considered the usual autocorrelation approach obtaining a very good agreement inside the statistical errors. In spite of its simplicity the autocorrelation analysis has the disadvantage that gives different results if one considers the random variable xt or a function f(xt) of it. The mutual information is a generalization of this tool which does not depend from the function f considered. The agreement observed for the mutual information is surely a severe test of similarity. A central role in the comparison between the approximation and the “true” signal is surely played by the available information. Following the idea of Kelly, it has been shown by Baviera et al. [11] that this quantity corresponds, in absence of transaction costs, to the optimal growth rate of the invested capital following a particular trading rule. We show that even a Markov process of order 1 mimics properly the Deutschemark/US dollar behavior. Finally, we have analyzed a “distance” between processes based on the Kullback and Leibler entropy. The advantage of this technique is that one is able to estimate the difference between the processes with a quantity strictly connected with Shannon entropy and then with the available information, i.e., the quantity of interest for a patient speculator. The Markovian model we have considered in this paper not only has the advantage to mimic very well the available information of the financial series but also give strong indication about the “true” process itself. While the former is the quantity of interest for a patient speculator who invests directly on the exchange market, the latter is more interesting from both the theoretical and experimental sides to have a deeper insight of the market behavior. This asset-model will allow to reach a better evaluation of risk with the natural consequences on the derivative field.