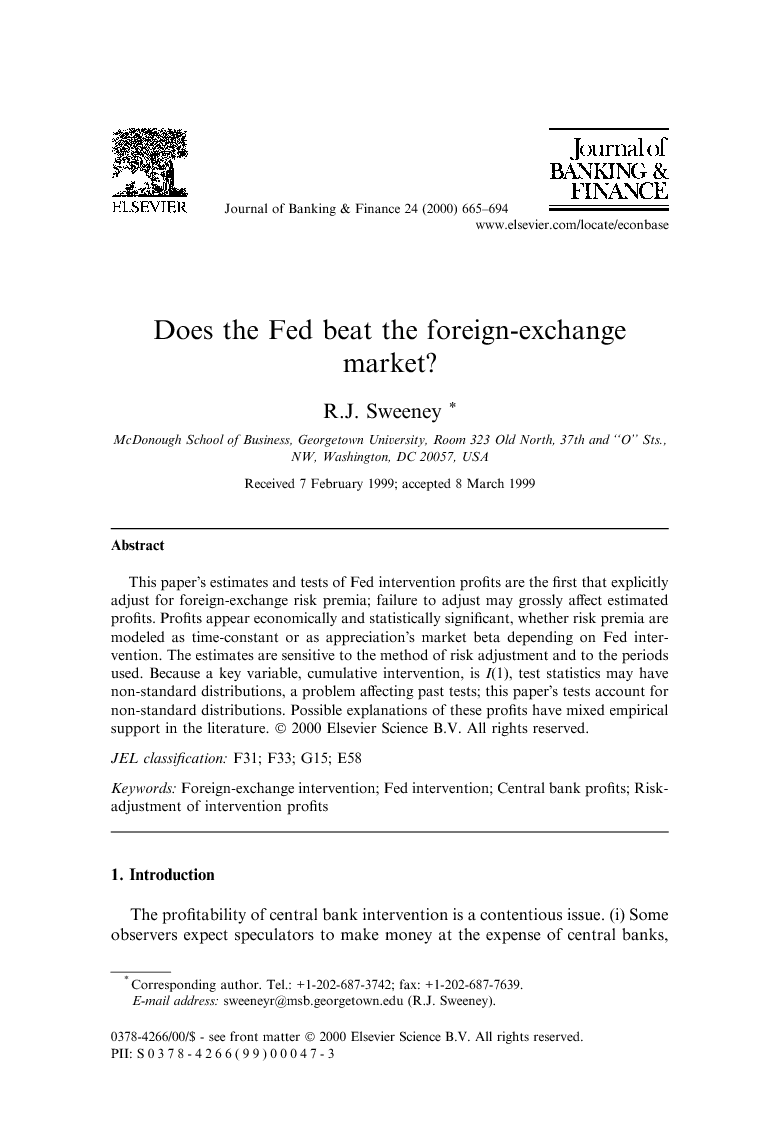 This paper’s estimates and tests of Fed intervention profits are the first that explicitly adjust for foreign-exchange risk premia; failure to adjust may grossly affect estimated profits. Profits appear economically and statistically significant, whether risk premia are modeled as time-constant or as appreciation’s market beta depending on Fed intervention. The estimates are sensitive to the method of risk adjustment and to the periods used. Because a key variable, cumulative intervention, is I(1), test statistics may have non-standard distributions, a problem affecting past tests; this paper’s tests account for non-standard distributions. Possible explanations of these profits have mixed empirical support in the literature.

The profitability of central bank intervention is a contentious issue. (i) Some observers expect speculators to make money at the expense of central banks, partly because of beliefs of government inefficiency relative to private activities, partly because some central banks assert they sometimes lean against the wind in attempts to slow down exchange-rate movements Sweeney, 1986 and Corrado and Taylor, 1986. (ii) Others note that if the foreign-exchange market is strong-form efficient relative to intervention, a central bank makes zero expected profits on its intervention. (iii) Those who expect central bank intervention profits offer differing sources of profits. Some argue that central banks have information unavailable to the public, particularly regarding future monetary policy, and may make intervention profits from using this information. Others argue that central banks profit from intervention to reduce volatility in “disorderly markets”. Related, some argue that central banks profit from intervening against destabilizing speculation or from supplementing insufficiently strong private stabilizing speculation (Leahy, 1995); still others argue the contrary, that central banks may profit from intervention that is destabilizing.1 Empirical results have not settled the debate because they are conflicting. Some authors present evidence of central bank losses (Taylor, 1982a,b; Schwartz, 1994), others of profits (Leahy, 1989, 1995; Fase and Huijser, 1989, among others). Sweeney (1997) provides a review of the literature. Previous estimates of central bank intervention profits are unreliable for several reasons. Previous work incorrectly measures profits by not accounting for the foreign-exchange risk central banks bear from intervention and the premia they can expect to earn for bearing this risk, though some papers note that an unknown part of measured profits may be due to risk premia Leahy, 1989 and Leahy, 1995. Further, previous work takes no account of the implications of the Efficient Markets Hypothesis in formulating measures and tests of intervention profits, though some paper discuss implications of estimated profits for efficiency Leahy, 1989 and Leahy, 1995. Finally, previous work does not take account of the fact that profit measures depend on a variable integrated of order one, and thus the asymptotic distributions both of the profit measure and its test statistics can easily be non-normal. This paper presents estimates and tests of Fed intervention profits that account for all of these problems.2 Central banks have goals beyond profitability and may intervene to achieve desired outcomes even at the cost of intervention losses Bank of England, 1983, Edison, 1993 and Dominguez and Frankel, 1993a. Most central banks argue that they make profits on average from their intervention. Obviously, acknowledged losses might present serious political problems. This paper does not attempt to identify and measure the benefits the Fed achieves by its intervention, but instead focuses on estimates and tests of the Fed’s risk-adjusted intervention profits. In some speculative crises central banks clearly make or lose money, for example, the European Monetary System (EMS) crises of September 1992 and July–August 1993. Dispute seems to turn on the profitability of ongoing intervention, not necessarily just crisis-period profits. This paper uses daily data on Fed intervention in Deutsche Marks (DEM) and Japanese Yen (JPY) from 1985 to 1991, the data available when this project began. There were patches of important exchange-market stress during this period, including the Plaza (September 1985) and Louvre (February 1987) Accords, but no events on the order of the 1992 and 1993 EMS crises. Risk-adjusted profits are measured here under two assumptions: Foreign-exchange risk premia are time-constant (less stringently, risk-premium variations are uncorrelated with Fed intervention); or, time variations in risk premia arise in an augmented market model where beta risk varies with Fed intervention. Under the strong form of the efficient markets hypothesis (EMH), expected risk-adjusted profits are zero for the investor tracking Fed intervention. Alternatively, the expected return from bearing foreign-exchange risk may vary around the risk premium. If the Fed buys (sells) a currency whose expected appreciation exceeds (falls short of) the premium, the Fed earns positive expected risk-adjusted profits. This alternative might hold because Fed intervention creates divergences between expected appreciation and the risk premium, or because the Fed anticipates divergences but does not eliminate them or perhaps is unable to influence them. Section 2 discusses the data used. Based on the implications of the EMH, Section 3 develops the test statistics used. Because cumulative intervention is integrated of order one, test-statistic distributions may be non-standard. How non-standard distributions arise, and how to handle them, is discussed. Section 4 discusses risk-adjustment models. Section 5 presents profit estimates for time-constant risk premia, Section 6 for time-varying risk premia arising in an augmented market model. In 5 and 6, estimates of intervention profits over the 1985–1991 period range from 0.903 to 15.58 percent/year for the DEM and from 2.66 to 8.61 percent/year for the JPY, with some estimates significant, others not. Estimated profits tend to be larger under the assumption of time-constant rather than time-varying risk premia. Estimated profits, and their significance, can vary substantially depending on whether estimated for the period as a whole or one year at a time, or equivalently, whether estimates for multi-year periods allow for separate year effects. Failure to adjust for risk can grossly affect estimated profits. Section 7 offers a summary and discusses possible explanations for estimated Fed intervention profits. Fed intervention profits may derive from superior Fed information about coming monetary policy, but studies find mixed results that are only weakly consistent with the view that Fed intervention contains information regarding coming monetary policy Lewis, 1995, Kaminsky and Lewis, 1996 and Fatum and Hutchison, 1999. Fed profits may arise from interaction with private speculators. LeBaron (1996) and Sweeney (1996b) report that technical analysis allows risk-adjusted profits for private speculators, but neither find evidence that the Fed profits from opposing destabilizing speculation or from re-enforcing stabilizing speculation. Dominguez (1997) and Baillie and Osterberg (1996) find conflicting evidence on whether the Fed intervenes to try to reduce the conditional volatility of appreciation and hence possibly profits by calming “disorderly markets”. Clearly, Fed intervention profits require further research.

The profitability of central banks' foreign-exchange intervention is an important, contentious issue. Past estimates of Fed profits have failed to resolve conflicting opinions (see Sweeney (1997) for a review). In estimating Fed profits, this paper supersedes previous work in three ways. First, it takes account of premia that compensate investors for bearing foreign-exchange risk, as must be done to estimate economic profits. Failure to include risk premia can greatly change estimated profits. This paper’s approach can be used with any estimatable risk model. Second, the paper bases its profit measures and tests on the Efficient Markets Hypothesis. Third, it recognizes that the profits involve a variable integrated of order 1 and hence the profit measures and test statistics may have non-normal distributions. It discusses how this may arise and how to handle the problem in testing. Results are reported here for two ways of adjusting for risk. Mean adjustment subtracts the sample-mean rate of appreciation (net of the interest-rate differential) from daily net appreciation. This adjustment is most appropriate if risk premia in foreign-exchange markets are time-constant or, more weakly, intervention and risk premia are orthogonal. Market-model adjustment subtracts the market-model estimates of net appreciation from actual net appreciation. This approach allows for time-varying risk premia. In particular, the market beta of appreciation is conditioned on Fed intervention. A central bank may have intervention goals beyond profits, and may arguably do a good job overall even if it makes intervention losses. But a central bank may well face political difficulties if it makes intervention losses; almost every central bank claims that it makes money on intervention, save in those speculative crises where it clearly makes losses. Because the outside observer cannot know which portion of intervention a central bank undertakes for goals beyond profits and perhaps in the expectation of losses, this paper's tests do not adjust for such activities. This paper's estimates on daily data for the period, 1985–1991 suggest the Fed makes risk-adjusted profits. For the entire period, estimates of profit rates range from 0.90 to 15.58 percent/year for the DEM, and from 5.66 to 8.61 percent/year for the JPY. In some years, profits are significant, in others not. Mean adjustment tends to give larger profits than market-model adjustment. Using an adequate risk model is then crucial to evaluating risk-adjusted intervention profits. On balance, estimated profits appear economically and statistically significant. Observers who think central banks lose money from their intervention have an important prima facie case against intervention. The burden is on the central bank to justify the losses in terms of other benefits from intervention. This paper's results, that conditional on the risk models used, the Fed appears to make risk-adjusted profit from its intervention, suggest that evaluating intervention requires more detailed, quantified cost–benefit analysis than has yet been attempted. If these estimated profits are taken at face value, they raise an important theoretical, empirical and policy issue: Why does the Fed make profits on its intervention? Evidence that intervention profits arise from the Fed acting on its superior knowledge about coming monetary policy is mixed. Lewis (1995) finds that Fed intervention helps predict changes in interbank interest rates and various monetary aggregates, but only over a two-week period; she views this relationship as arising less from signaling than from Fed operating procedures with a lag between intervention and sterilization. Kaminsky and Lewis (1996) find that Fed intervention gives signals of changes in interbank rates and monetary aggregates, but in the contrary direction from what the signaling hypothesis usually predicts. Fatum and Hutchison (1999) investigate whether Fed intervention is associated with changes in the Fed Funds futures rate, with the Fed Funds rate taken as an indicator of monetary policy and the futures rate as a predictor of the coming Fed Funds rate. They report no systematic relationship. Fed intervention may make profits from countering “disorderly markets”. Some see “disorderly markets” as directly related to conditional volatility as found in GARCH models. In this view, periods of high volatility induce intervention aimed to reduce volatility. Evidence is mixed. Dominguez (1997) finds no evidence that volatility induces Fed intervention. Baillie and Osterberg (1996), allowing different reactions to up and down movements, find intervention reacts directly to volatility in the JPY but not the DEM. Fed profits might arise from interaction with private speculators. Speculator and Fed positions may be opposite; the Fed profits reported here would be speculators' losses. Alternatively, the Fed and speculators take positions in the same direction, and the Fed profits reported here imply speculator profits. The interpretation in this case is that the Fed supplements stabilizing private speculation that is occasionally insufficient in volume to stabilize the market; profits arise from offsetting destabilizing shocks from the private sector or other governments.26Sweeney (1996b) reports that technical analysis offers risk-adjusted profits for private speculators, but that the implied private trades are essentially uncorrelated with Fed intervention. Thus, it is not possible to explain Fed or speculator profits as arising at the expense of the other, nor can the actors' profits be explained as arising from stabilizing the same exchange-market shocks. LeBaron (1996) argues that technical analysis allows speculators to make profits and these profits are largely associated with days the Fed intervenes, with the speculator taking positions counter to the Fed's. This is a possible explanation for speculator profits but does not explain the Fed profits estimated here. Clearly, much remains to be done to explain Fed risk-adjusted intervention profits.