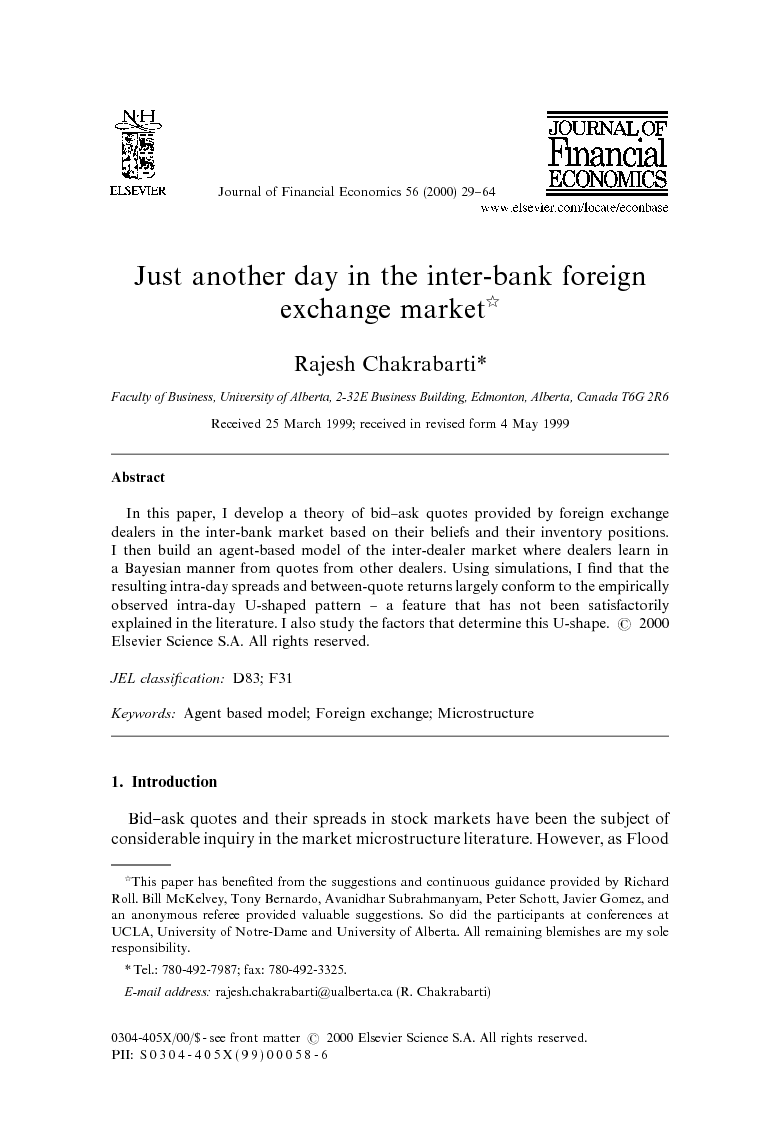 In this paper, I develop a theory of bid–ask quotes provided by foreign exchange dealers in the inter-bank market based on their beliefs and their inventory positions. I then build an agent-based model of the inter-dealer market where dealers learn in a Bayesian manner from quotes from other dealers. Using simulations, I find that the resulting intra-day spreads and between-quote returns largely conform to the empirically observed intra-day U-shaped pattern – a feature that has not been satisfactorily explained in the literature. I also study the factors that determine this U-shape.

Bid–ask quotes and their spreads in stock markets have been the subject of considerable inquiry in the market microstructure literature. However, as Flood (1991) points out, `little attention has been paid to the particular microstructure of the foreign exchange market'. Since the institutional arrangements of the NYSE and the foreign exchange market are significantly different, the theories of bid–ask spreads developed in one setting do not automatically carry over to the other. The most important distinction between the two markets is that, while the NYSE is a centralized market, a large part of the foreign exchange market – the direct inter-bank foreign exchange market – is a decentralized one. Biais (1993) and Perraudin and Vitale (1995) point out how the difference between these two market forms can lead to some important differences in efficiency and other market characteristics. This paper views the decentralized foreign exchange market as a complex system, and builds a model of intra-day quotes offered by traders. Then it demonstrates, using simulation, that when dealers with heterogeneous price expectations trade according to this model and update their beliefs in a Bayesian fashion, their actions lead to the empirically observed U-shaped pattern in intra-day spreads, spread volatility, and quote-to-quote return volatility. Direct inter-dealer trading constitutes the most important part of the foreign exchange market. In the Deutsche mark-to-dollar spot market, the largest of all foreign exchange markets, nearly 85% of the trading is between dealers and about two-thirds of this trade is direct (as opposed to brokered) (see Lyons, 1995). The direct market has been characterized as a `decentralized, bilateral, continuous, open-bid, double-auction market’ (Flood, 1991). Bilateral direct trading, using either electronic or voice-based options, involve communication between the counter-parties only. With systems like the Reuters Dealing 2000-1, it is possible to get simultaneous quotes from more than one dealer, but the decentralized nature of the market persists. This decentralized nature is crucial to the way information circulates in this market. This paper views the foreign exchange market as a complex system of interactions among traders. In the foreign exchange market, the evolution of quotes is determined by more than only the initial beliefs of the participating agents and their subsequent updating. Quotes evolve based on the path of interaction between dealers, and depend on the exact sequence of which trader gets quotes from which other trader. Consequently, even when the initial values of the relevant state variables – priors and inventory – follow well-known probability distributions, modeling and tracking the evolution of quotes between dealers becomes an overwhelming task, even for a reasonable number of agents. The appropriate technique for studying such a market is agent-based modeling. Here the decision making of a single agent is modeled explicitly and then several such agents are allowed to interact in a simulated environment. In the simulations, all agents begin with initial values of state variables which follow specified probability distributions and then interact with one another through their quotes. The resulting sequence of intra-day quotes is then analyzed. When this experiment is repeated several times, we get a distribution for our variable of interest with the randomness eliminated by averaging across the several replications. In this paper, I use this technique to model the inter-dealer foreign exchange market. Empirical studies of intra-day quotes in the foreign exchange market (see, for example, Hsieh and Kleidon, 1996) have regularly observed high spreads and volatility of quotes at the beginning and close of trading at the major currency trade centers similar to that observed in stock markets. No satisfactory explanation of this observed U-shaped pattern in spreads and quote-to-quote return volatility in the foreign exchange market has emerged so far in the literature. Important contributions in the market microstructure literature that seek to explain the similar U-shaped pattern in stock markets (e.g. Admati and Pfleiderer, 1988; Subrahmanyam, 1991) typically attribute the pattern to the existence of asymmetric information among traders. However asymmetric information is unlikely to be an important factor in the foreign exchange market, which is dominated by inter-dealer trades among banks of comparable size. Hsieh and Kleidon (1996) examine the performance of these standard asymmetric information models in explaining the Reuters intra-day data on deutsche mark-for-dollar trades. They conclude that `the standard information models are unable to explain (the) data’ and speculate that `some form of learning’ may explain the existence of large spreads and volatility of quotes at the opening of trading, while inventory management by market-makers may be responsible for the characteristic pattern at the close. With the use of simulations, I demonstrate that trading among heterogeneous dealers, according to the model of bid–ask quotes developed here, along with Bayesian updating of beliefs frequently leads to the U-shaped pattern observed empirically. The model builds on the idea that dealers learn in a Bayesian fashion about the excess demand situation in the market from one another's quotes. Further, dealers attach a cost to having positions open overnight. The dealers’ desire to minimize overnight exposure leads them to provide and react to quotes in a way that frequently results in the U-shape in spreads and volatility of quote-to-quote returns. Section 2 of the paper discusses the complex nature of the inter-dealer foreign exchange market. Section 3 describes the model in detail. Section 4 describes the simulation while Section 5 presents the results and offers interpretations. Section 6 concludes with suggestions for extensions in future research.

In this paper, I have developed a model of bid–ask quotes of risk-averse foreign exchange dealers and, using the technique of agent-based modeling and simulation, provided an explanation of the high spreads and return volatility empirically observed at the beginning and end of trading in the foreign exchange market. I model the behavior of an individual foreign exchange dealer with an objective function that is increasing in intra-day returns and decreasing in inventory risk, both during the day as well as for overnight positions. I then let artificial dealers act according to the model in a virtual market. I find that the resulting spreads and between-quotes returns largely conform to the observed patterns. Further, I investigate the factors that influence the levels of spread, spread volatility, and return volatility at the beginning and close of trading relative to the day's average level. I find that while it is mostly the relative level of price of overnight risk and price of intra-day risk that affects the spread and spread volatility, the return volatility reacts to changes in the parameters in a complex way. This paper suggests several possibilities for further research. On one hand, several extensions and refinements of this model suggest themselves immediately. The Bayesian learning process may be extended to include updating on the basis of customer orders in addition to updating in response to quotes from other dealers. Whether revealing their reserve quotes is the best strategy for the dealers or not is a question that needs to be answered in order to acquire a better understanding of the behavior of the dealers. Also, the issue of how the possibility of making non-binding indicative quotes affects both kinds of quotes needs to be studied. Another channel of possible research would explore the stock markets from the complex system and agent-based modeling viewpoint. Markets of specialist trading, like the NYSE, can now be modeled with Bayesian updating on the part of both informed and uninformed traders as they receive quotes of the specialist. This model can lead to a better understanding of the short-term decision making behavior of agents, and the resulting information flow. A comparison of the results obtained in a centralized market, like the NYSE, with that obtained in the decentralized direct foreign exchange market can clarify the impact of market structure. A third path for future research would lead to the data. Independent assessments may be made for the realistic ranges of the different parameters. These ranges may be used for calibration, as well as for estimating the values of the more elusive parameters like κ and λ, the risk aversion parameters. The conclusions of this paper itself may be tested by studying whether the afternoon spreads are higher on Fridays and before holidays, when presumably the overnight risk is higher than on other days. A careful scrutiny of these issues will lead to a much better understanding of the microstructure of a complex system like the decentralized inter-dealer foreign exchange market.