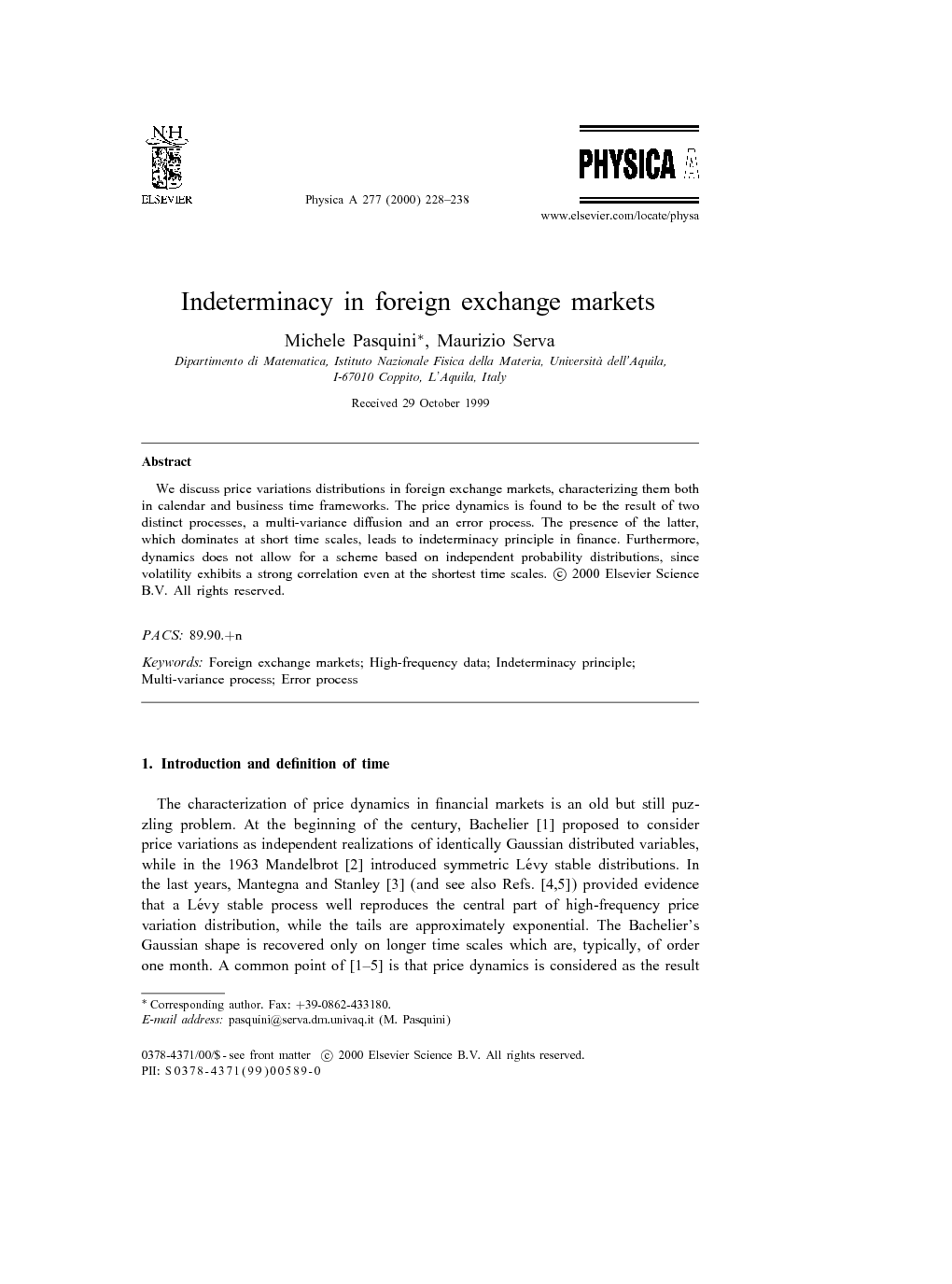 We discuss price variations distributions in foreign exchange markets, characterizing them both in calendar and business time frameworks. The price dynamics is found to be the result of two distinct processes, a multi-variance diffusion and an error process. The presence of the latter, which dominates at short time scales, leads to indeterminacy principle in finance. Furthermore, dynamics does not allow for a scheme based on independent probability distributions, since volatility exhibits a strong correlation even at the shortest time scales.

The characterization of price dynamics in financial markets is an old but still puzzling problem. At the beginning of the century, Bachelier [1] proposed to consider price variations as independent realizations of identically Gaussian distributed variables, while in the 1963 Mandelbrot [2] introduced symmetric Lévy stable distributions. In the last years, Mantegna and Stanley [3] (and see also [4] and [5]) provided evidence that a Lévy stable process well reproduces the central part of high-frequency price variation distribution, while the tails are approximately exponential. The Bachelier's Gaussian shape is recovered only on longer time scales which are, typically, of order one month. A common point of [1], [2], [3], [4] and [5] is that price dynamics is considered as the result of independent random variables. This kind of approach seems inadequate, since there is evidence of volatility correlations on long run [6], [7], [8], [9], [10], [11], [12] and [13]. Indeed, price distribution strongly depends on how one measures time flow. The choice of time index is twofold, calendar time and business time. Business time is the sequence of integers n=1,2,3,… which indexes successive established quotes. These integers correspond, respectively, to the calendar times t1,t2,…. Therefore, calendar time (which is monotonically increasing) is a stochastic process of business time. The relation can be inverted by considering n as a function of calendar time, i.e., n=nt, but in this case the function is defined only on the sequence of quoting calendar times. The price dynamics, therefore, can be described with respect to business time by means of series Sn or with respect to the calendar time by means of St≡Snt. In the first cases quotes S are defined on all integers and lags are all equal, in the second, they are defined only on quoting times and lags are unequal. The main result of this paper is that a price quote is due to two distinct independent stochastic processes: an error process superposed to an underlying price process. The latter evolves following calendar time, while the former is due to an erroneous evaluation of a market operator, and its natural frequency is marked by business time. The resulting price variation distribution is, therefore, the convolution of two distributions associated to these two distinct processes: the error process distribution, which does not change with time, and the distribution of the underlying process, which scales, on the contrary, with calendar time. The error process produces always a gap between two consecutive price estimations even if they are almost contemporary. This phenomenology strongly reminds quantum mechanics, where a measurement result always has a minimum uncertainty as stated by the Heisenberg Principle. Following this comparison, one can state an indeterminacy principle in finance: a price is never given with a precision less than a natural constant for that market. Another important fact which is due to this phenomenology is that two consecutive price variations cannot be considered fully independent random variables, but they exhibit a very peculiar anticorrelation as we will see. Moreover, we provide evidence that volatility is so strongly correlated that remains substantially constant inside the largest lag we consider, and therefore the usual Lévy stable scheme seems to be not appropriate. In this paper we examine the high-frequency price variation distribution of three foreign exchange markets, the Deutsch Mark/US Dollar (DEM-USD) exchange in 1993 (1,472,140 quotes) and in 1998 (1,620,843 quotes), the Japanese Yen/US Dollar (JPY-USD) in 1993 (570,713 quotes), and the Japanese Yen/Deutsch Mark (JPY-DEM) in 1993 (158,878 quotes). The quotes represent the value of one US Dollar in Deutsch Marks and in Japanese Yens respectively, the DEM-USD and JPY-USD cases, while they represent the value of one Deutsch Mark in Japanese Yens in the DEM-JPY case. The price changes are given in pips, which indicate a DEM/10,000 in the DEM-USD case, and a Yen/100 in the JPY-USD and JPY-DEM cases. All the data sets analyzed in this work have been provided by Olsen & Associates. We deal only with bid price, since we have found more spurious data in the ask price distributions due to wrong transcriptions. This is probably related to the fact that in recording process quotes are specified by bid price and the last two digits of the bid/ask spread. Nevertheless, all the results can be fully reproduced if one deals with ask price or average price. The paper is organized as follows. In Section 2 it is shown that a price variation is given by the composition of two distinct stochastic processes and that the hypothesis of independent consecutive price variations is incorrect, due to the presence of both price anticorrelation and volatility correlation. In Section 3 the price variation distribution for a single business lag and for the minimum calendar lag (2 s) are computed. The latter turns out to be, basically, the error distribution. In Section 4 we provide evidence that the underlying price variation distribution at a generic calendar time lag is given by a symmetric Gaussian process whose standard deviation is itself a log-normal process. In Section 5 some final remarks are reported.

We have found evidence that two distinct stochastic processes, an underlying process and an error process, are present in price change dynamics in foreign exchange markets. The latter process, which can be put in connection with the price estimations of market operators, suggests a quantum like nature for price changes variables, in the sense that they have an irreducible intrinsic indeterminacy. For this reason market models based on continuous time limit seem to be not adequate. Another main consequence of the indeterminacy principle is that price changes cannot be considered as the result of independent stochastic processes, because of the presence of correlations even at the shortest time scales. In fact, the spurious anticorrelations in the observed price changes [16] can be easily explained in the light of the error process. At this point it seem quite clear that a moving chart over few observed prices is able to give a more accurate estimation of the underlying price at a given time. Nevertheless, the number of observed prices in the moving chart cannot be too large (i.e., calendar time lag cannot be too long) otherwise too large price variations due to the underlying process would decrease accuracy. We expect to find effects of the indeterminacy principle also in high-frequency market quotes of single stocks. On the contrary, the error component in change distributions of composite market indexes are probably not so important because of the averaging of errors due to the large number of different stocks involved. Finally, the volatility of the underlying process exhibits a strong autocorrelation, since it turns out to be substantially constant up to time scales of, at least, 10 min. This is a clear evidence that the underlying volatility is a stochastic process with a larger characteristic time, while variance at short time scales is basically due to the error process. We have proposed that the underlying volatility follows from a log-normal process and that the underlying price change distribution is a symmetric Gaussian whose standard deviation is the log-normal stochastic volatility. This hypothesis is in a very good agreement with experimental data.