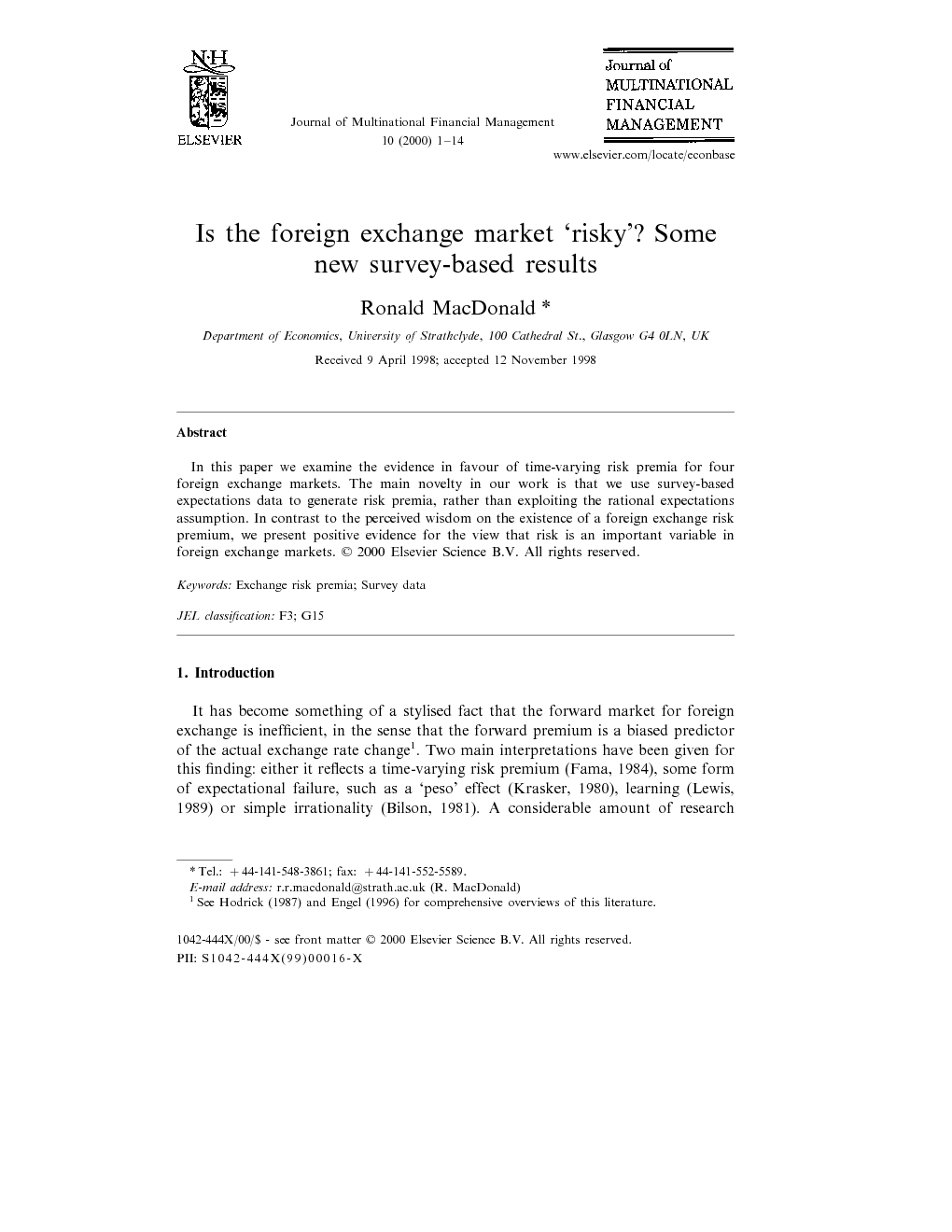 It has become something of a stylised fact that the forward market for foreign exchange is inefficient, in the sense that the forward premium is a biased predictor of the actual exchange rate change1. Two main interpretations have been given for this finding: either it reflects a time-varying risk premium (Fama, 1984), some form of expectational failure, such as a ‘peso’ effect (Krasker, 1980), learning (Lewis, 1989) or simple irrationality (Bilson, 1981). A considerable amount of research effort has been devoted to discerning which of these interpretations is responsible for the rejection, with the largest effort being devoted to the risk premium interpretation. Conditional on the assumption of rational expectations, a number of researchers have sought to test for the existence of a time-varying foreign exchange risk premium and also attempted to model it. A fair assessment of this literature would be that the evidence in favour of a risk premium is rather limited2. More positive results have been reported by researchers who have sought to interpret the biasedness result as stemming from the expectational failures of risk neutral agents. This literature has involved using forward forecast errors to generate trading rules which turn out, in an ex post sense, to be profitable (Bilson, 1981, Bilson and Hsieh, 1987 and Marsh and Power, 1996). A problem with either the risk premium or expectational interpretation of forward rate biasedness is that it is just that—an interpretation. In order to avoid taking a position on whether agents are risk neutral and/or rational, a number of researchers have advocated using survey data on foreign exchange market participants expectations of exchange rates (see, inter alia, Frankel and Froot, 1987, Frankel and Froot, 1989, Frankel and Froot, 1990, Dominguez, 1986, MacDonald and Torrance, 1988, MacDonald and Torrance, 1990, MacDonald, 1990b, MacDonald, 1992, Cavaglia et al., 1993, Cavaglia et al., 1994, Frankel and Chinn, 1993, MacDonald and Marsh, 1994, MacDonald and Marsh, 1996 and Chinn and Frankel, 1994). This research may be thought of as trying to decompose the measure of forward rate biasedness, recorded in numerous regression results, into a component due to risk and a component due to irrationality3. A fair summary of this burgeoning literature is that it suggests that both irrationality and time-varying risk premia are responsible for the rejection. However, all of the above-noted survey tests are concerned with testing for the existence of time-varying risk premia. None, to our knowledge, actually attempts to empirically model the risk premium generated from survey data. This is the purpose of the present paper. Our approach is wholly empirical. In particular, we use survey data collected by Money Market Services (UK) to construct risk premia for four currencies. We then analyse the time series properties of these premia using different time series methods. In contrast to practically all of the extant literature which exploits the rational expectations assumption to construct risk premia, we report a considerable amount of evidence supportive of time-varying risk premia. The outline of the remainder of this paper is as follows. In the next section we define the survey- and rational expectations-based foreign exchange risk premia and briefly discuss two models which facilitate the pricing of foreign exchange risk. In Section 3, the data set used in the paper is defined. In Section 4, ARCH and GARCH models are used to generate explanatory variables for the risk premium. The paper closes with a concluding section.

Until fairly recently, the conventional wisdom was that the evidence for the existence of a foreign exchange risk premium was rather weak (MacDonald, 1990a). However, to our knowledge, all of this evidence was predicated on the assumption of rational expectations. In this paper we have used survey-based measures of risk premia for four foreign exchange markets in an attempt to shed some light on the existence of foreign exchange risk premia. Our main results may be summarised in the following way. First, survey-based risk premia are time-varying and volatile (especially when compared to forward premia), but not as volatile as rational-based risk premia. Second, survey risk premia, although stationary, exhibit considerable persistence. ARCH- and GARCH-based models were used to test a version of the general equilibrium asset pricing model of the risk premium and this reveals that foreign exchange risk premia are significantly related to the conditional variance of forecast errors. This result differs from the findings of Domowitz and Hakkio (1985) who tested the GEAP model with risk premia defined using the rational expectations assumption. Finally, our survey-based measures of the risk premium were used to test a variant of the portfolio balance model and again this proved successful since statistically significant relationships between risk premia and the conditional variance of stock market volatility were reported. We did not find any evidence of a ‘DM effect’, in the sense that the DM-based risk premium analysed in this paper behaved in a similar fashion to the US-based premia. The main result of our study is that, in contrast to much of the extant literature based on the assumption of rational expectations, the risk premium is alive and well in the foreign exchange market.