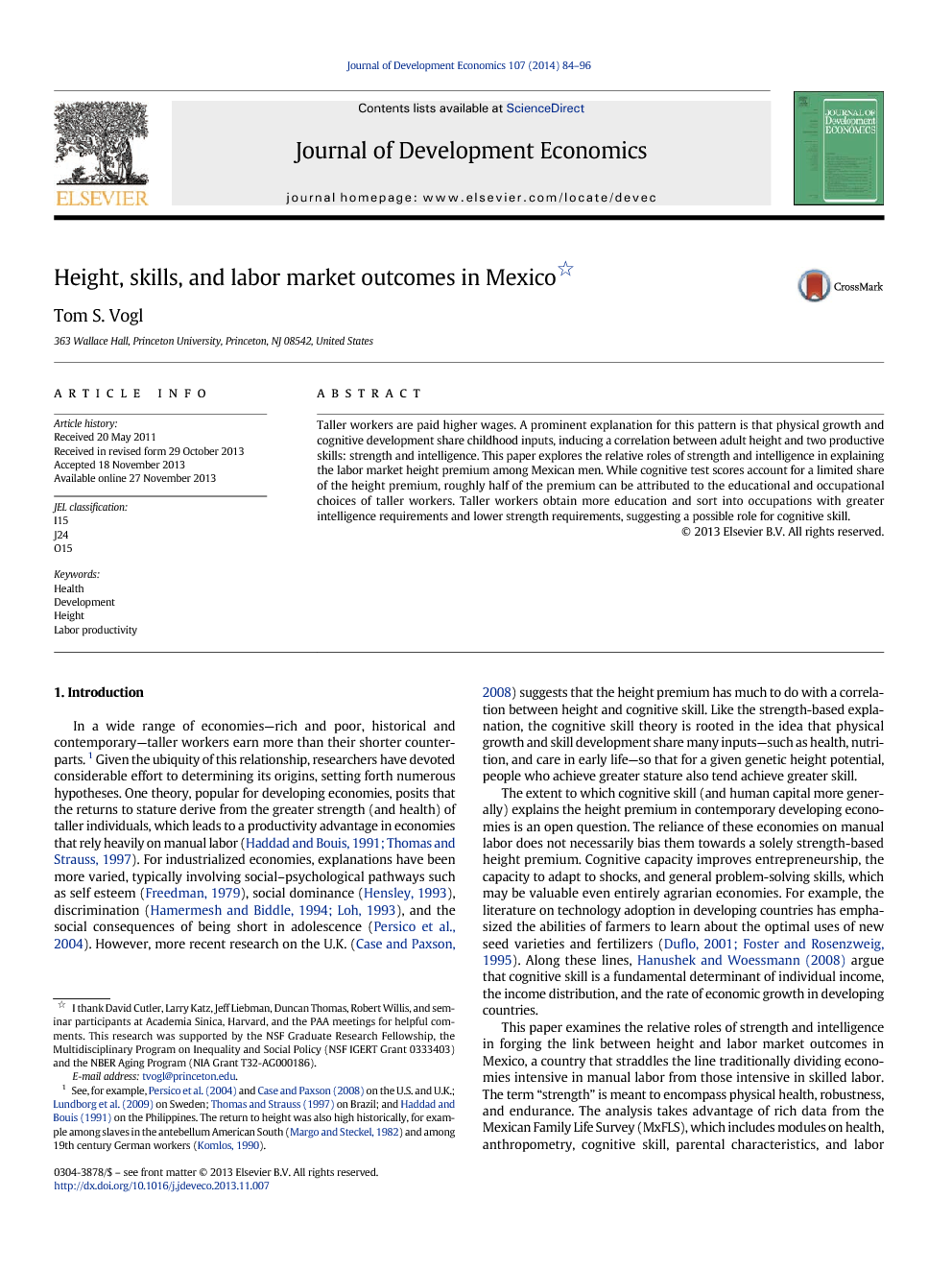 Taller workers are paid higher wages. A prominent explanation for this pattern is that physical growth and cognitive development share childhood inputs, inducing a correlation between adult height and two productive skills: strength and intelligence. This paper explores the relative roles of strength and intelligence in explaining the labor market height premium among Mexican men. While cognitive test scores account for a limited share of the height premium, roughly half of the premium can be attributed to the educational and occupational choices of taller workers. Taller workers obtain more education and sort into occupations with greater intelligence requirements and lower strength requirements, suggesting a possible role for cognitive skill.

Despite the universality of the association between height and labor market outcomes, conventional wisdom holds that its sources differ widely by setting. This paper shows that the origins of the height premium in developing and industrialized economies may be more similar than was previously thought. Much of the height premium accrues across broad occupation and schooling categories. As with Americans and Britons (Case and Paxson, 2006), taller Mexicans sort into occupations with greater cognitive skill requirements and lower physical strength requirements, a pattern almost entirely explained by their greater educational attainment. However, while childhood conditions account for a noteworthy portion of the higher earnings and “brainier” occupations of taller workers, cognitive test scores account for far less. Although their interpretation is ambiguous, these results contribute to previous work on the relative roles of brains and brawn in the link between body size and labor market outcomes in developing countries (Behrmann et al., 2009, Pitt et al., 2012, Rosenzweig and Zhang, 2012 and Thomas and Strauss, 1997). The occupational sorting identified here may appear to be at odds with the results of Thomas and Strauss (1997), which show a higher height premium among the self-employed than among wage laborers. Thomas and Strauss interpret this difference as possible evidence for a strength-based height premium, given the tendency of the self-employed to engage in manual labor. In fact, unreported analyses reveal similar patterns in the Mexican data, with a higher height premium among the self-employed. But height is also negatively associated with self-employment, which suggests that the estimates for the self-employed may suffer from selection bias. Looking toward future research, the paper points in two fruitful directions. First, the Raven's matrix test measures just one dimension of cognitive skill; we would learn much from a richer set of cognitive tests. New work by LaFave and Thomas (2013) makes progress on this front by adding measures of fluid intelligence and word recall. When they include all three measures as covariates, they find a larger proportional reduction in the height premium than I do in this paper, although the residual height premium remains large. The measurement of cognitive skill in adulthood—after schooling investment decisions—is a limitation to both their analysis and mine. Longitudinal data with test scores from early childhood, as in Case and Paxson (2008), would provide a useful extension. Second, this paper has not explored the role of noncognitive skills (Bowles et al., 2001 and Heckman et al., 2006). Using data from Sweden, Lundborg et al. (2009) show that height is correlated with measures of noncognitive ability and estimate that this correlation explains a non-negligible share of the height premium. The role of noncognitive ability in explaining the height premium in developing economies is a fruitful topic for future research. Whatever the explanation for the height premium, it lays bare the profound effects of early-life conditions on later-life outcomes in school and in the labor market. In Mexico as elsewhere, the children of better-off parents experience superior physical growth and cognitive development. These dynamics may play an instrumental role in the intergenerational transmission of economics status. Research that disentangles the mechanisms underlying these relationships—including the returns to height—will help guide policies aimed at improving health and expanding the capability sets of young individuals as they reach adulthood