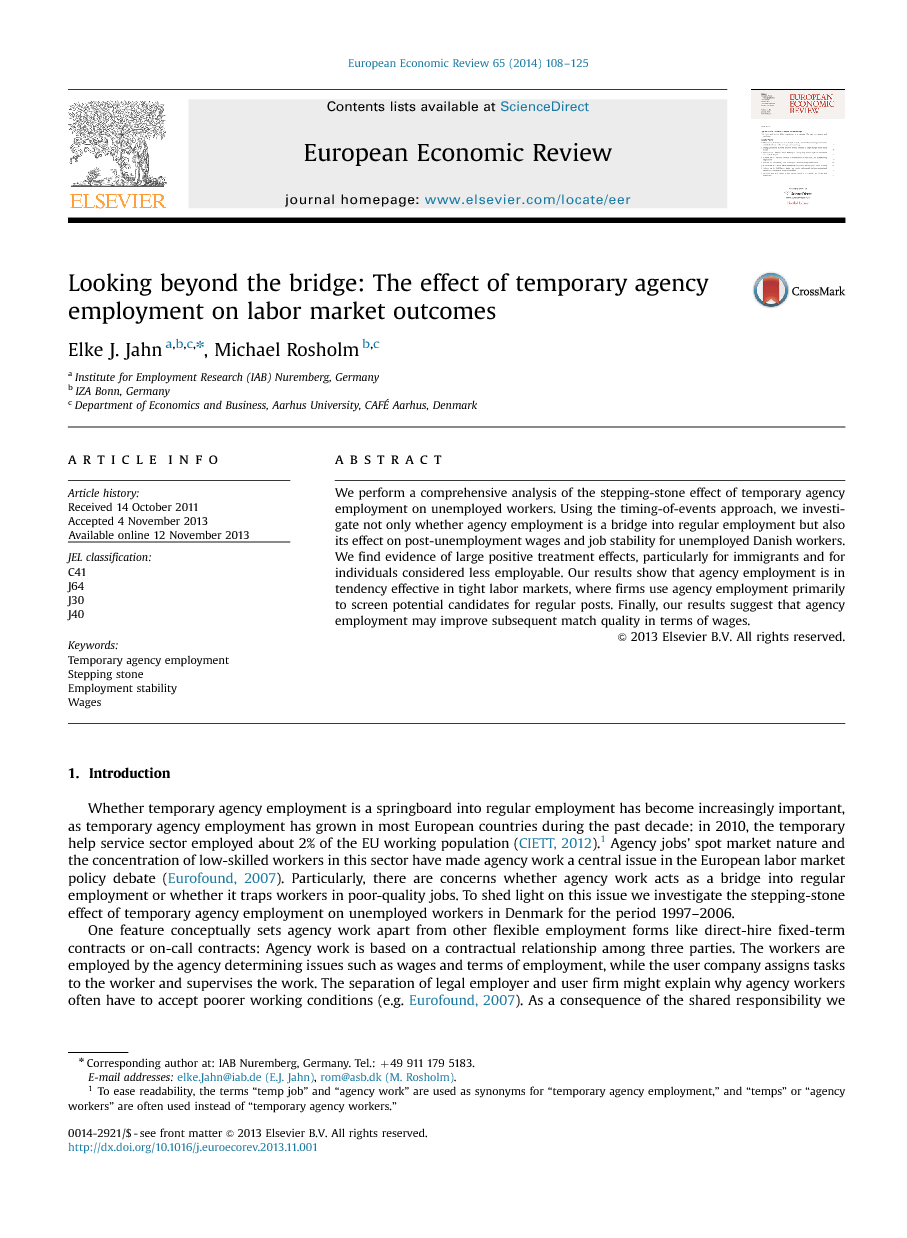 Whether temporary agency employment is a springboard into regular employment has become increasingly important, as temporary agency employment has grown in most European countries during the past decade: in 2010, the temporary help service sector employed about 2% of the EU working population (CIETT, 2012).1 Agency jobs’ spot market nature and the concentration of low-skilled workers in this sector have made agency work a central issue in the European labor market policy debate (Eurofound, 2007). Particularly, there are concerns whether agency work acts as a bridge into regular employment or whether it traps workers in poor-quality jobs. To shed light on this issue we investigate the stepping-stone effect of temporary agency employment on unemployed workers in Denmark for the period 1997–2006. One feature conceptually sets agency work apart from other flexible employment forms like direct-hire fixed-term contracts or on-call contracts: Agency work is based on a contractual relationship among three parties. The workers are employed by the agency determining issues such as wages and terms of employment, while the user company assigns tasks to the worker and supervises the work. The separation of legal employer and user firm might explain why agency workers often have to accept poorer working conditions (e.g. Eurofound, 2007). As a consequence of the shared responsibility we would also expect agencies and user firms to be less concerned about future career prospects of agency workers compared to direct-hire fixed-term workers. Thus, agency work is less likely to be a pathway to regular jobs. Nevertheless, the theoretical impact of agency work on employment outcomes of the unemployed is not clear a priori. The acquisition of human capital is seen as the main channel through which agency employment offers a path into regular jobs (e.g. Abraham, 1990). The argument is that agency work may improve workers' human capital through the variety of assignments ( Autor, 2001). Critics of this argument claim that human capital effects must be small given the short job duration ( Segal and Sullivan, 1997). Due to frequent changes between user firms, agency work may also provide more useful labor market contacts compared to other flexible employment forms. Thus, agency work may facilitate rapid entry into regular employment. This holds the more if client firms use temporary staffing arrangements to screen workers to fill vacancies (e.g. Cockx and Picchio, 2013 and Houseman et al., 2003; Jahn and Pozzoli, 2013). The central idea of agency work is to provide a flexible buffer to the user firm “leasing” the worker. In countries with strict employment protection legislation firms might also use agency workers to circumvent high firing costs (e.g. Jahn et al., 2012). In both cases temp jobs can be dead-ends if firms do not plan to fill these jobs permanently (e.g. Booth et al., 2002, Boeri and Garibaldi, 2009 and Heinrich et al., 2005). Thus, temp work may crowd out direct job search, inhibiting longer-term labor market advancement. To investigate these competing hypotheses, several studies estimate the effect of agency work on subsequent labor market outcomes. Yet, the empirical evidence is contradictory. No evidence of agency work acting as a springboard into regular employment has been found so far for Germany (Kvasnicka, 2009) or Spain (Amuedo-Dorantes et al., 2008). García-Pérez and Muñoz-Bullón (2005) and Malo and Muñoz-Bullón (2008) show that temp work serves only as a stepping stone for young, short-term unemployed workers and married women in Spain. In Italy, the effect on labor market outcomes depends on the region in question (Ichino et al., 2008). In general, it seems that rigid European labor market institutions do not facilitate successful transitions from temp work into regular jobs. The American evidence is not conclusive either.2 Our study contributes to this debate by, first, taking into account the different motivations for unemployed people to work as temps: escaping unemployment, to obtain or prolong eligibility for unemployment benefits, or to combine family responsibilities with labor market participation. Since the motivation to pursue agency work is not observed, it is important to separate the treatment effects from time-invariant unobserved variables affecting both the selection into agency employment and the transition out of unemployment. To do so, we employ the timing-of-events approach developed by Abbring and Van den Berg (2003a). There are two related studies employing a similar approach, but not focusing exclusively on agency jobs.3De Graaf-Zijl et al. (2011) studies temporary jobs in general, of which agency work makes up only a small fraction. Cockx and Picchio (2012) investigate the impacts of ‘short-lived’ jobs observed to be so ex post and thus can be of any type. As our study exclusively focuses on agency jobs the interpretation of our results can lead more easily to policy advice. Second, our approach differentiates between in-treatment and post-treatment effects of taking a temporary agency job during a phase of unemployment. This enables us to shed some light on whether temp workers are able to accumulate human capital, which may lead to a regular job, or whether agency employment stigmatizes workers and harms subsequent labor market careers. Third, this is the first study employing the timing-of-events approach to model comprehensively the effect of taking up a temporary agency job during a phase of unemployment on the post-unemployment job quality, i.e. job and employment stability and post-unemployment wages in the European context. Finally, the linked employer–employee data used provides us with weekly information on the labor force status for the entire Danish population for the period 1997–2006. This is a vast improvement over earlier work in this strand of literature. We find that agency work serves as a bridge into regular employment while being in treatment. However, we did not find positive post-treatment effects, and for women having had a temp job leads to a significant negative effect. However, temp work does not affect post-unemployment job quality adversely. Temps gain from taking agency jobs in terms of wages. The paper is organized as follows. Section 2 discusses the temporary help sector and the unemployment insurance system. Section 3 presents the estimation strategy. Section 4 presents the data and main descriptive statistics. In Section 5, we discuss results; Section 6 draws conclusions and provides a policy discussion.