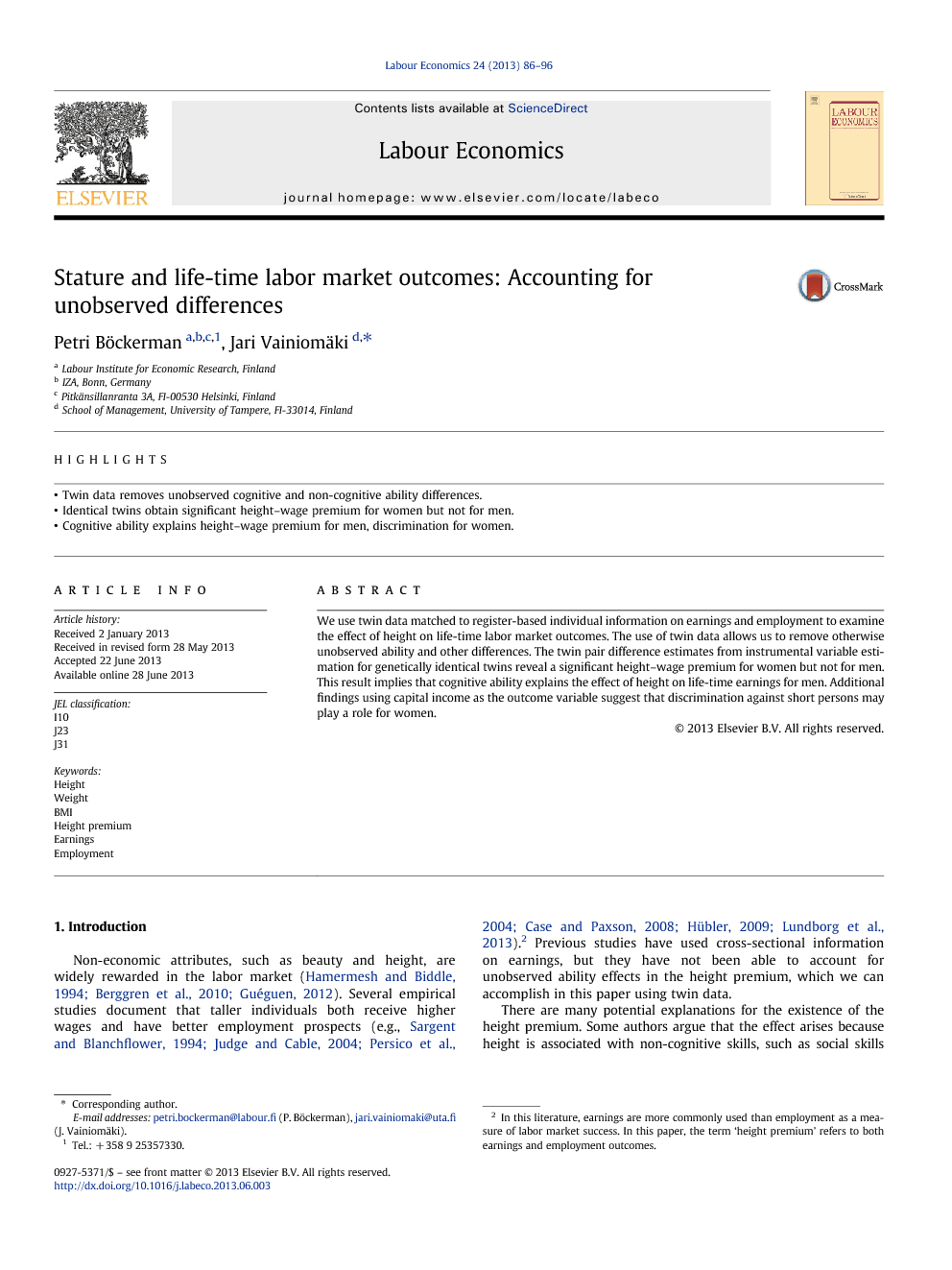 We use twin data matched to register-based individual information on earnings and employment to examine the effect of height on life-time labor market outcomes. The use of twin data allows us to remove otherwise unobserved ability and other differences. The twin pair difference estimates from instrumental variable estimation for genetically identical twins reveal a significant height–wage premium for women but not for men. This result implies that cognitive ability explains the effect of height on life-time earnings for men. Additional findings using capital income as the outcome variable suggest that discrimination against short persons may play a role for women.

Non-economic attributes, such as beauty and height, are widely rewarded in the labor market (Hamermesh and Biddle, 1994, Berggren et al., 2010 and Guéguen, 2012). Several empirical studies document that taller individuals both receive higher wages and have better employment prospects (e.g., Sargent and Blanchflower, 1994, Judge and Cable, 2004, Persico et al., 2004, Case and Paxson, 2008, Hübler, 2009 and Lundborg et al., 2013).2 Previous studies have used cross-sectional information on earnings, but they have not been able to account for unobserved ability effects in the height premium, which we can accomplish in this paper using twin data. There are many potential explanations for the existence of the height premium. Some authors argue that the effect arises because height is associated with non-cognitive skills, such as social skills (Persico et al., 2004).3 Others maintain that cognitive skills are more important contributors to the height–wage premium (Case and Paxson, 2008).4 In particular, Case and Paxson (2008) argue that 30–50% of the height premium can be attributed to cognitive ability measured in childhood and youth. Thus, taller persons receive higher wages because they have better cognitive ability, which is rewarded in the labor market. Lundborg et al. (2013) claim that the positive effect of height on earnings can be explained by the positive association between height and a person's physical capacity.5 They demonstrate that physical capacity explains 80% of the observed height premium for men. Furthermore, the height premium has also been explained by a correlation between height and authority (Lindqvist, 2012) or by the existence of discrimination against short persons in the labor market (e.g., Cinnirella and Winter, 2009). We contribute to the debate on two frontiers by examining the effects of height on both earnings and employment using twin data. Using data on non-identical twins is effectively the same as controlling for sibling effects (the shared family environment).6 Additionally, monozygotic twins have the same genes, implying largely similar cognitive abilities7 and usually the same early life experiences and largely the same social contacts (non-cognitive skills).8 With data on genetically identical twins, we can remove the otherwise unobserved ability differences that constitute the most prominent explanation for the height premium according to Case and Paxson (2008). Furthermore, all other unobserved factors that closely correlate with genetics (shared family environment and shared interactions of genes and family) are removed for identical twins. Therefore, our contribution is to use twin data to control for differences between individuals in cognitive and non-cognitive skills in the height premium estimation. Previous research has used various test score results and other indicators to control for these factors. However, such tests are incomplete measures of the underlying traits that they measure. We argue that with the use of twin data we can more completely control for these unobserved traits. Secondly, to examine the cumulative effects of height, we match the twin data to register-based data on life-time labor market outcomes. This matching is important because previous studies on the height premium have almost exclusively used cross-sectional self-reported information on labor market outcomes. Short-term, cross-sectional measures of income, such as yearly earnings and hourly wages, contain idiosyncratic components that diminish the precision of the estimates (cf. Dahl et al., 2011). Register-based life-time earnings have much less measurement error than short-term measures. This accuracy increases the efficiency of the estimates, which is particularly important for relatively small samples, as in the twin pair differences. In our data, height is self-reported, but twin pair differences can be instrumented with measurements from another time point to alleviate the attenuation bias caused by the potential measurement error in self-reported height. We also examine explicitly the role of social skills in the height premium. This is important because Persico et al. (2004) argue that social skills explain the height premium. Furthermore, the literature has used only earnings as the outcome variable. We extend the literature by estimating separate effects on capital income that may provide additional insights about the underpinnings of the height premium. In addition, we evaluate the effect of height during different business cycle conditions, an effect that has been overlooked previously. To the best of our knowledge, only one earlier study has used twin data to examine the height premium (Behrman and Rosenzweig, 2001). Their sample is restricted to female twins based on the Minnesota Twin Registry, and the estimates are obtained for cross-sectional, self-reported earnings. Using twin pair differences, Behrman and Rosenzweig (2001) find evidence for the existence of the height premium but no evidence for a wage penalty associated with obesity.9 Complementing the findings in Behrman and Rosenzweig (2001), we explore both male and female same-sex twins and thereby examine the possibility that outward attributes are treated differently in the labor market for men and women. The remainder of the paper is structured as follows. Section 2 introduces the data. Section 3 outlines our empirical specifications. Section 4 reports descriptive evidence and the baseline estimation results. Section 5 discusses several additional specifications for assessing the robustness of the baseline results. Section 6 concludes.

In this paper, we examined the effect of height on life-time labor market outcomes using Finnish same-sex twin data to account for the unobserved biases in the earlier studies. The employment effects of height are quantitatively small, even in cross-sectional OLS specifications. Therefore, the earnings effect of height is driven by the height premium in hourly or monthly wages rather than in labor market attachment. Accounting for unobserved ability and family effects using twin pair differences for genetically identical twins, we find no evidence for the effect of height on employment. This pattern prevails for both men and women. The observation supports the conclusions in Case and Paxson (2008) about the importance of cognitive ability in explaining the effect of height on labor market outcomes. But the role of cognitive ability is more complex when using life-time earnings over the 15 year period as the outcome variable. The preferred estimates of twin pair differences with IV for genetically identical twins reveal a significant height premium for women but not for men. This finding implies that unobserved cognitive ability explains the effect of height on life-time earnings for men but not for women. Since differences in cognitive ability do not fully account for the female height premium in life-time earnings, we use information on different sources of income to provide some additional light on the likely explanation. In particular, the disappearance of height premium for MZ female twins when using capital income as the outcome variable suggests that discrimination against short persons may play some role in explaining the height premium for women. The non-existence of the height–wage premium for men implies an absence of significant upward bias from within-twin differences in ability, so that it is not an important factor in explaining the height premium. The cross-sectional height premium is explained by the shared genetic and environmental factors that are similar to MZ twins, but vary across random individuals. We argue that within-twin differences in ability do not explain the female height premium either, because it begs the question as to why it would affect women but not men, and ability bias should show up in the capital income estimates also if it is important. We explicitly considered the potential contribution of social skills as the determinant of the height premium, following Persico et al. (2004). The results reveal that women with poor social skills have lower wages, based on individual-level OLS. However, this pattern does not prevail for men, and social skills do not play any role in twin pair difference estimates. Also, social skills do not account for the differences in employment in any of the models, not even the models based on individual-level OLS for women. Furthermore, both the estimates for life-time earnings and employment show that twin differences for DZs, which control for the family environment that constitutes the base for social contacts, are unable to remove the positive effect of height on life-time labor market outcomes. All these results point to the conclusion that social skills do not constitute a comprehensive explanation for the existence of the height premium, at least not in our twin sample. Height may be just a marker of good health. However, we do not obtain evidence for the explanation that health is an important determinant of the height premium by using information on the prevalence of various diseases measured 15 years before our labor market outcomes. Health is an important determinant of life-time labor market outcomes, and persons with worse health obtain considerably lower wages later in life. But the effect of height on the labor market outcomes remains intact after adding information on diseases to the covariates. We also find that the height premium is not constant over business cycle fluctuations; it seems to be somewhat larger during a depression, especially for men. This countercyclical nature of the height premium has not been documented elsewhere. Thus, height may be a more valuable characteristic when the labor markets are tight. While this new finding is interesting per se, it is not possible to use the result to settle the explanation for the height premium. Because our data contain only one severe depression, this pattern has to be studied also in other contexts. All the empirical specifications that we estimated included BMI among the explanatory variables. In the preferred specifications, we find no evidence for a wage penalty from obesity.34 This finding applies to both men and women, and it is additionally robust to the use of an alternative instrument for BMI. Thus, we confirm the results in Behrman and Rosenzweig (2001) for men and women, using life-time labor market outcomes with different instrument variables strategies. This result is particularly important because the obesity-related wage penalty is widely reported in the literature using non-twin data.