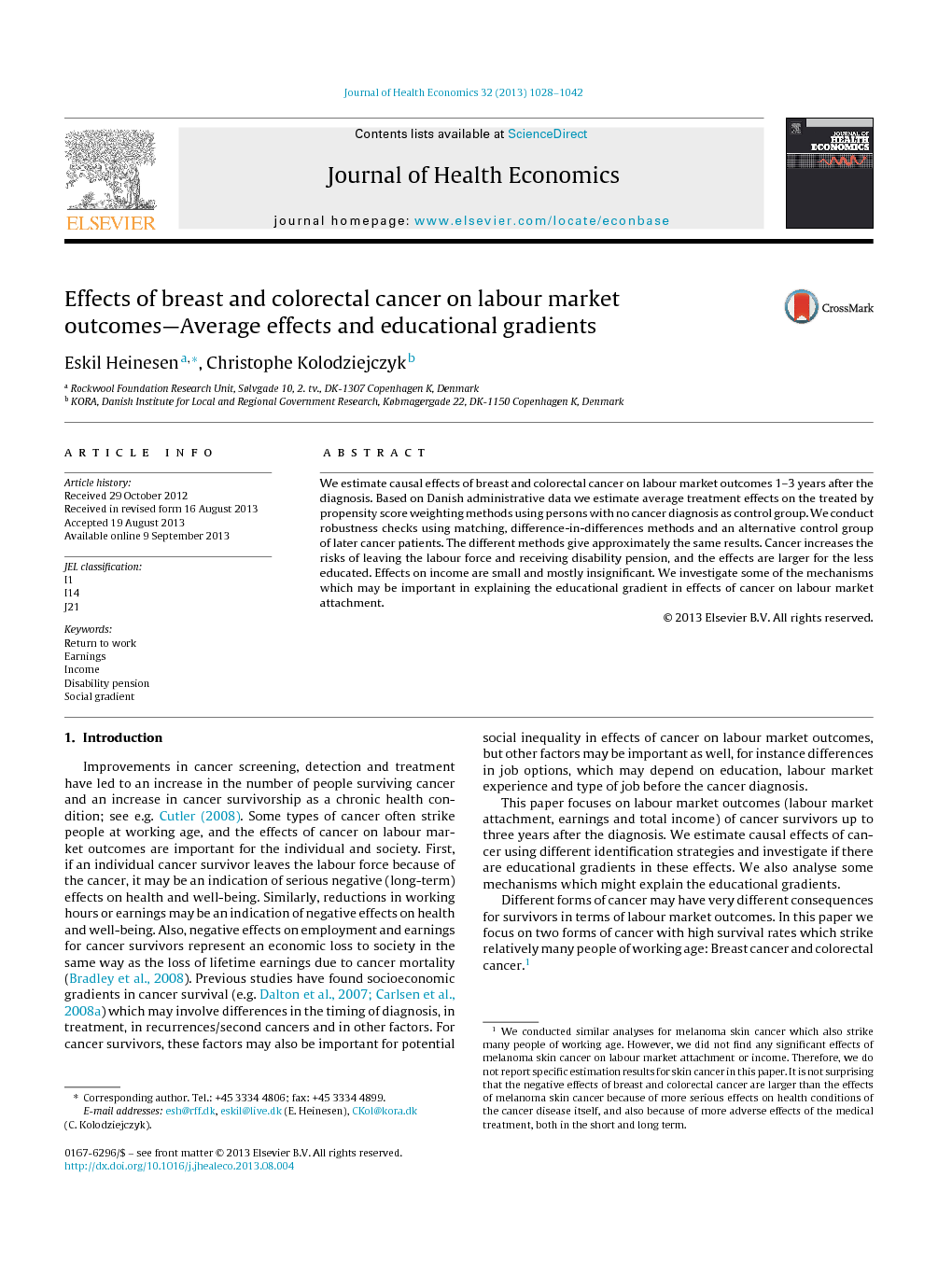 We estimate causal effects of breast and colorectal cancer on labour market outcomes 1–3 years after the diagnosis. Based on Danish administrative data we estimate average treatment effects on the treated by propensity score weighting methods using persons with no cancer diagnosis as control group. We conduct robustness checks using matching, difference-in-differences methods and an alternative control group of later cancer patients. The different methods give approximately the same results. Cancer increases the risks of leaving the labour force and receiving disability pension, and the effects are larger for the less educated. Effects on income are small and mostly insignificant. We investigate some of the mechanisms which may be important in explaining the educational gradient in effects of cancer on labour market attachment.

We estimate effects of breast and colorectal cancer on labour market outcomes and income for three-year survivors in Denmark using different estimation strategies: propensity score weighting (based on the selection on observables assumption) and dif-in-dif (allowing for unobserved individual fixed effects), and we use two different control groups: individuals with no cancer diagnosis, and an alternative control group of later cancer patients. Results are robust to these alternative estimation methods and control groups. We find significant effects of breast and colorectal cancer on labour market participation and disability pension take-up, and a significant educational gradient: Three years after the diagnosis the risk of being out of the labour force increases by about 10 percentage points for people with no education beyond compulsory school, by about 7 percentage points for people with a vocational education, and by about 4–5 percentage points for those with a further or higher education. The corresponding figures for the risk of disability pension three years after the diagnosis are 9, 5–6 and 3–4 percentage points. For both types of cancer the negative effects on total income are small. Estimates indicate only very small negative effects on hourly wages and earnings for those who work, but these estimates may be biased due to induced sample selection, since those who remain employed, in spite of having cancer, may have greater commitment to their careers, suggesting that the true effects could be more negative. Several mechanisms may be important in explaining the educational gradient in effects of cancer on labour market attachment. Firstly, as we have shown, individuals with a lower education have considerably higher baseline risks of leaving the labour force and of receiving disability pension. This may indicate that this group is more vulnerable in general, and therefore it may not be surprising that effects of cancer are larger in absolute terms. Thus, even though we find substantial and significant educational gradients in absolute terms, the differences between education groups are smaller in relative terms, i.e. when considering, e.g. the increased risk of leaving the labour force due to cancer divided by the baseline risk in case of no cancer. Secondly, economic incentives may be important for individuals who are able to work. Thus, people with low education and low income may have stronger incentives to not working and to apply for disability pension because of a higher replacement ratio of public benefits, but on the other hand, people with a higher education and higher income will typically have access to more supplementary compensation from labour market pension schemes or private pension or insurance schemes. Our findings indicate that differences in economic incentives are not very important. Thus, we find only very small negative income effects of cancer and we do not find an educational gradient in income effects. However, there may be significant heterogeneity in coverage, and we do not observe the potential non-participation income of individuals who continue to work, so it might be that highly educated individuals with a high income and poor supplementary coverage have a higher propensity to continue working instead of applying for disability pension. Thirdly, individuals with a higher education might be in better health after cancer treatment because they are more aware of likely symptoms so that the cancer was discovered at an earlier stage, or because they receive different treatment, or because they are more efficient in terms of following advice from doctors during treatment and after. However, we found that the risks of metastasised cancer at diagnosis or second cancers/recurrences are not smaller for patients with a higher education. Fourthly, a larger share of people with a lower education may have to accept physically demanding jobs which may be especially difficult to attend to after a cancer disease. Our results based on stratification by type of job at baseline (indicators of blue- and white-collar workers) are consistent with this hypothesis. Thus, some of the educational gradients in effects of cancer on employment are reduced considerably according to point estimates. However, standard errors in this analysis are large since very few with a further education are blue-collar workers and very few white-collar workers are low-educated. This is not surprising, especially since the indicators of job type are primarily based on the level of qualifications needed in the job rather than how physically demanding the job is. Nevertheless, if one of the mechanisms behind the educational gradients in effects of cancer on employment, which we find, is that a larger share of low-educated patients had physically demanding jobs at baseline, retraining policies targeted on this group which increase their chances of finding other types of jobs might be effective. Interventions that improve early detection and treatment and reduce symptoms of cancer patients in general may reduce educational gradients in employment effects of cancer, since improved ability to work may be more important for the low-educated who may to a greater extent have to accept physically demanding jobs. It is important to note that effects of cancer (and other serious health conditions) on labour market outcomes and income may to some extent depend on the institutional setting, especially the welfare system, labour market policies and the prevalence and coverage of private health insurance and pension schemes. Therefore, our findings may not generalise to other industrialised countries, especially countries with very different institutional settings such as the US. This may in particular be true for effects on income and earnings and for very short-term employment effects. Our estimates of employment effects three years after diagnosis are largely consistent with results in Moran et al. (2011) and Short et al. (2008) for the US.