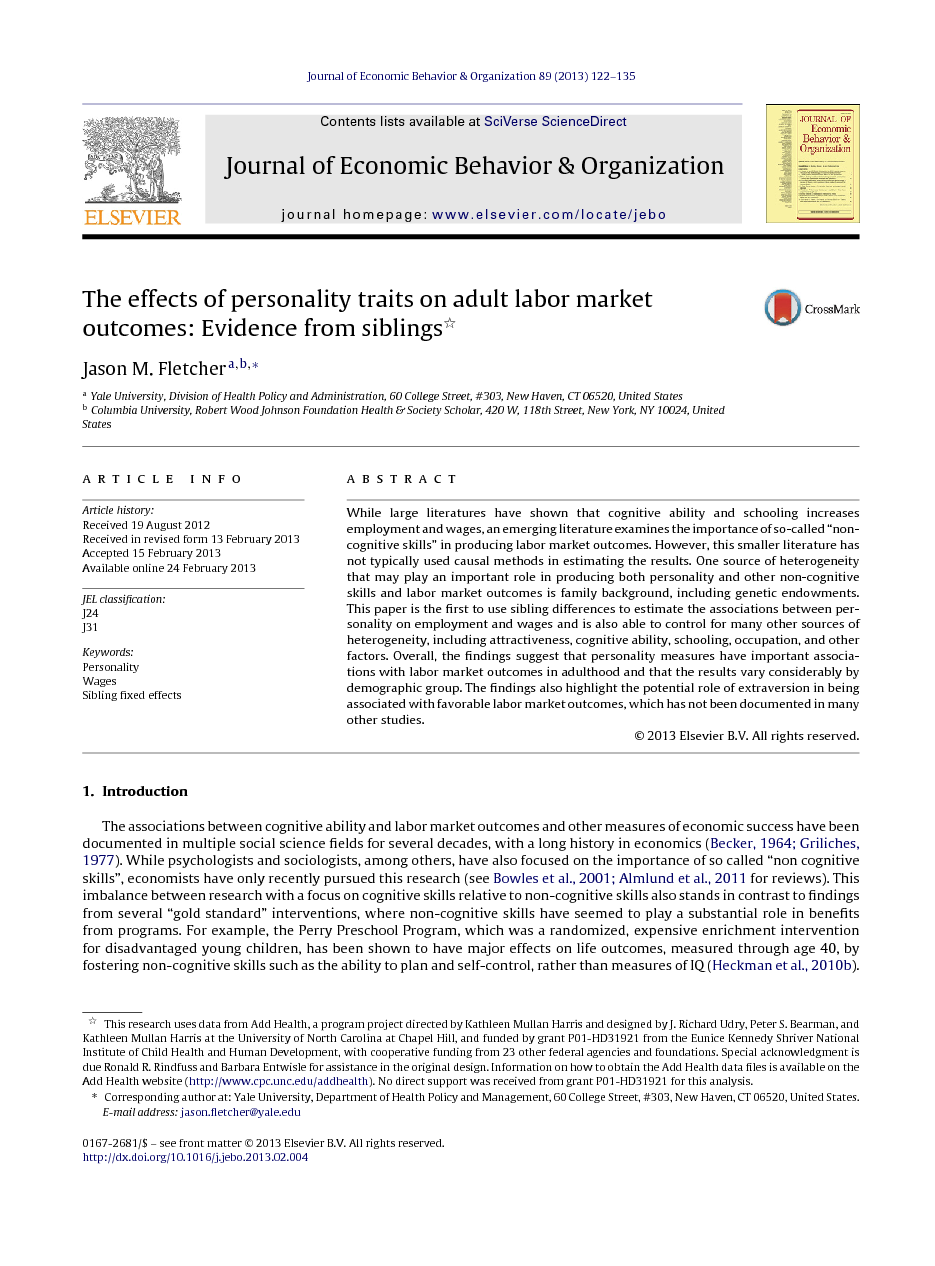 While large literatures have shown that cognitive ability and schooling increases employment and wages, an emerging literature examines the importance of so-called “non-cognitive skills” in producing labor market outcomes. However, this smaller literature has not typically used causal methods in estimating the results. One source of heterogeneity that may play an important role in producing both personality and other non-cognitive skills and labor market outcomes is family background, including genetic endowments. This paper is the first to use sibling differences to estimate the associations between personality on employment and wages and is also able to control for many other sources of heterogeneity, including attractiveness, cognitive ability, schooling, occupation, and other factors. Overall, the findings suggest that personality measures have important associations with labor market outcomes in adulthood and that the results vary considerably by demographic group. The findings also highlight the potential role of extraversion in being associated with favorable labor market outcomes, which has not been documented in many other studies.

The associations between cognitive ability and labor market outcomes and other measures of economic success have been documented in multiple social science fields for several decades, with a long history in economics (Becker, 1964 and Griliches, 1977). While psychologists and sociologists, among others, have also focused on the importance of so called “non cognitive skills”, economists have only recently pursued this research (see Bowles et al., 2001 and Almlund et al., 2011 for reviews). This imbalance between research with a focus on cognitive skills relative to non-cognitive skills also stands in contrast to findings from several “gold standard” interventions, where non-cognitive skills have seemed to play a substantial role in benefits from programs. For example, the Perry Preschool Program, which was a randomized, expensive enrichment intervention for disadvantaged young children, has been shown to have major effects on life outcomes, measured through age 40, by fostering non-cognitive skills such as the ability to plan and self-control, rather than measures of IQ (Heckman et al., 2010b). Similarly, the long term follow up of Project STAR, a class size reduction program in Tennessee, indicates that, while test score increases were not maintained after the completion of the program, the long term impacts on outcomes could have been caused by the fostering of non-cognitive skills (Dee and West, 2008 and Chetty et al., 2010). Thus, increasing understanding of the associations, and robustness of associations, between specific measures of non-cognitive skills on later outcomes is an important area of inquiry. There has been recent growth in the economic analysis of non-cognitive skills and economic success, and much of the research has focused on personality traits, as they seem to be linked to important adult socioeconomic measures. Typically, measures of conscientiousness have been found to be positively related to earnings, and measures of neuroticism are often negatively associated with labor market outcomes. However, the methods used to empirically link these personality measures are still advancing and the literature is not yet as mature as the research examining causal effects of cognitive skills. Indeed, little research to date has been able to control for family factors and genetic backgrounds that could affect both non-cognitive skill development and future life outcomes. This paper uses a national sample, with a large subsample of siblings and twins, to examine whether measures of personality are associated with labor market success as an adult. In particular, sibling fixed effects models will be used to understand the relationship between within-family differences in personality and within family variation in earnings and other labor market outcomes. Unlike much of the literature, findings suggest relatively large relationships between measures of extraversion that are comparable to the effects of skills or attractiveness. On the other hand, the associations between labor market outcomes and conscientiousness are less robust to controls for family factors. This finding of the fragility of the association is contrary to much of the earlier research in this area. The results also suggest important heterogeneity in some relationships by gender, childhood socioeconomic status, and race. Specifications that control for occupational sorting as well as educational attainment are often similar.

This study adds to the literature linking specific personality traits with labor market returns by using a recent national sample of young adults from the US. Methodologically, this study allowed controls for neighborhood effects, occupational sorting, as well as shared family background that could drive associations between personality and labor market success. A robust and relatively novel result is the large association between extraversion and earnings. This result could reflect the differing composition of jobs in the US in recent years, specifically the growth of service jobs and the requirement of social interactions in the workplace. Interestingly, the result is not explained by occupational sorting and is large in magnitude compared with more traditional characteristics, such as cognitive skills and even attractiveness. The results also cast some doubt on the robustness of links between conscientiousness and earnings found in the prior literature – the effects are replicated in the baseline models but are then reduced substantially with the inclusion of sibling fixed effects. Measurement error is unlikely to be solely responsible for this reduction, based on evidence from Cobb-Clark and Schurer (2011) on the incredibly high stability and test–retest correspondence in these measures. The results are also interesting in light of new interventions that seek to promote pro-social and non-cognitive skills in children. The current findings are suggestive of a potential for important economic benefits for successful interventions, though further evidence that is able to uncover causal effects linking personality measures to labor force outcomes will be more definitive. To the extent that personality measures also have a large genetic component (Bouchard and Loehlin, 2001 review a large number of family studies that report heritability estimates between 40 and 60%), the results also increase our understanding of the intergenerational transmission of inequality.