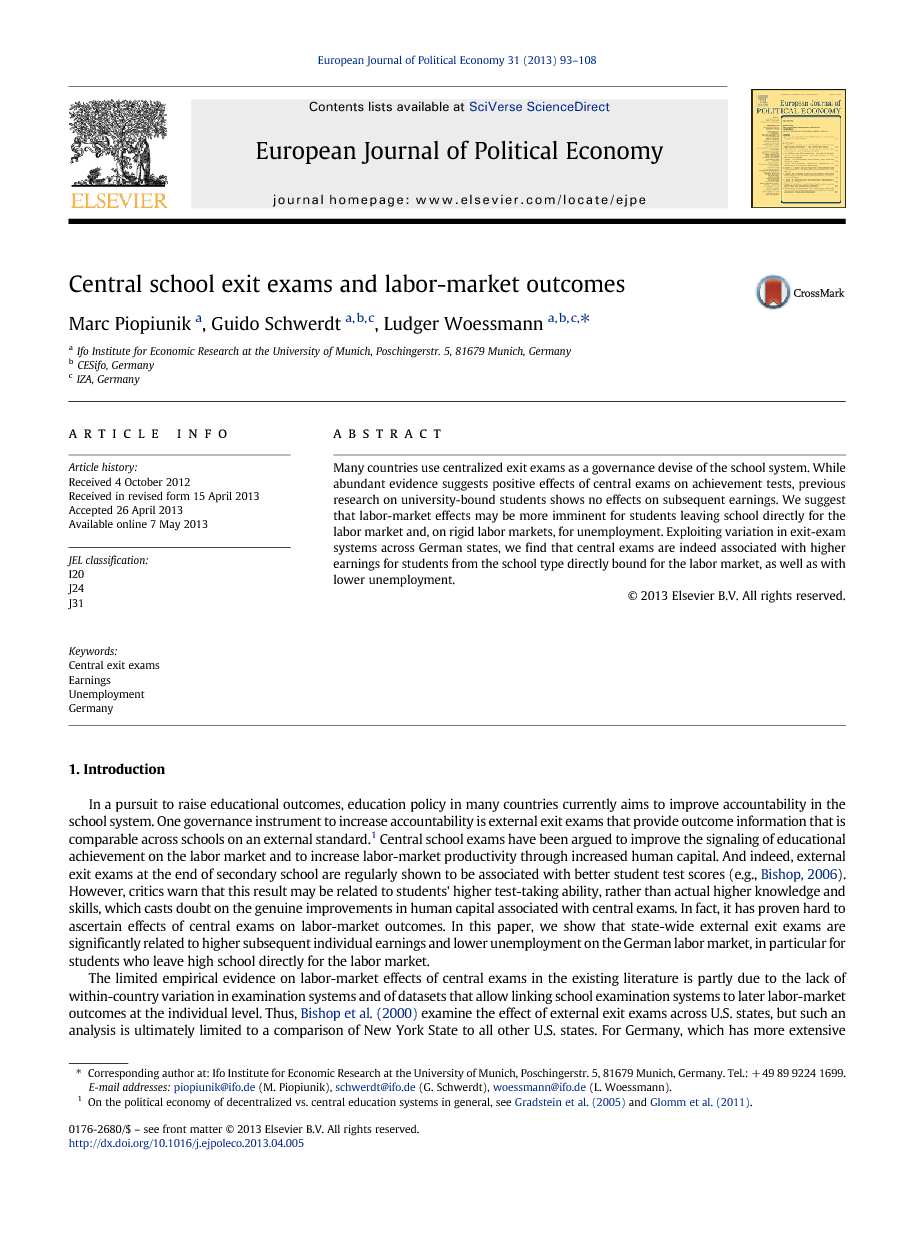 Many countries use centralized exit exams as a governance devise of the school system. While abundant evidence suggests positive effects of central exams on achievement tests, previous research on university-bound students shows no effects on subsequent earnings. We suggest that labor-market effects may be more imminent for students leaving school directly for the labor market and, on rigid labor markets, for unemployment. Exploiting variation in exit-exam systems across German states, we find that central exams are indeed associated with higher earnings for students from the school type directly bound for the labor market, as well as with lower unemployment.

This paper provides new evidence on the relationship between central school exit exams and labor-market outcomes. It confirms previous findings that central exit exams are not significantly related to earnings for graduates of secondary-school tracks that typically lead to higher education in Germany. However, we present new evidence of positive associations of central exit exams with earnings for graduates of the lowest track of secondary education. In addition, central exit exams are negatively associated with unemployment for graduates from both the low-track and the high-track schools. On average, central exit exams are associated with 11.5% higher earnings and 4.3 percentage points lower unemployment probability for graduates from low-track high schools, as well as with 3.2 percentage points lower unemployment probability for graduates from high-track high schools. While the effects on earnings for low-track graduates are roughly constant across age groups, the unemployment effects for low- and high-track graduates are present only for workers below age 50. We interpret the results as descriptive rather than causal because it is not clear to what extent all confounding factors could be controlled for in the cross-sectional setting. Still, the descriptive findings constitute value-added over what we knew so far and shed new light on the ongoing debate about the benefits of central school exit examinations. In contrast to existing labor-market evidence, they are consistent with theoretical models that predict positive effects of central exams on the labor market. Furthermore, the findings indicate important heterogeneity in the associations which points towards relevant details of the possible mechanism by which central exams may affect the labor market. In particular, they visualize that the type of education matters in an empirical analysis of the relationship between exam type and labor-market outcomes. While previous analysis for Germany focused on the earnings of graduates from the highest track of secondary education, our results suggest that effects might exist especially for graduates from the lowest track that leads directly into the labor market. If central exit exams affect student achievement and labor-market outcomes mainly through an increased informational content of the final grade, we would expect central-exam effects to be strongest in situations where labor-market entry follows directly after graduation. This is typically the case for graduates from the lowest track of secondary education in Germany, but not for graduates from higher tracks. Hence, this theoretical argument can reconcile the empirical findings. Additionally, the findings suggest that on rigid labor markets, possible labor-market effects can materialize in terms of unemployment as much as in terms of earnings.