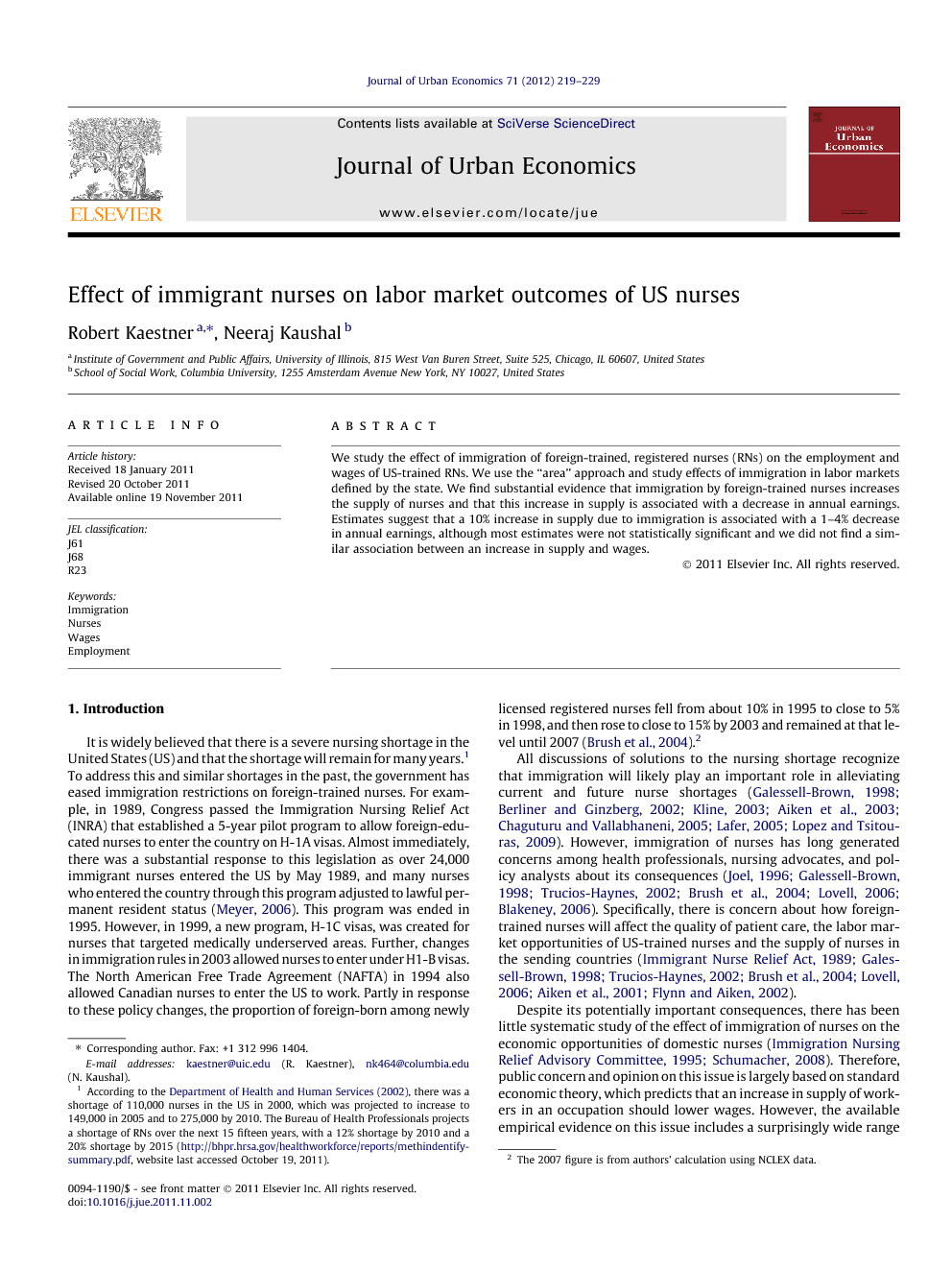 In this paper, we find substantial evidence that immigration by foreign-trained nurses increased the supply of nurses in labor markets defined by state boundaries. This increase in supply is associated with a decrease in annual earnings. Estimates suggested that a 10% increase in the total number of nurses due to immigration was associated with a 1–4% decrease in annual earnings, although estimates were not always significant. In contrast, estimates provided little evidence that the increase in supply was associated with wages or the probability of not working as a nurse. While there was much consistency in IV estimates of the association between immigration induced increases in the total number of nurses and annual earnings, the absence of similar evidence for wages and the weakness of our instruments limits our ability to draw definitive conclusions. It is possible that measurement error in wages, which depends on self-reported measures of annual earnings, weeks worked per year and hours worked per week, may explain the absence of greater evidence of an effect of immigration on wages. However, an alternative explanation of the pattern of results is weak instrument bias (Bound et al., 1995 and Stock and Yogo, 2005). The partial F-statistics for the instruments in first stage regressions were modest and in the range (e.g., F-statistics ranging from 6 to 10) where the bias due to weak instruments may be problematic. Our results suggest that using immigration policy to solve the current and expected “shortage” of nurses may adversely affect the earnings of US-trained nurses, although the evidence was at best suggestive. While lowering the cost of healthcare may be viewed as a positive outcome given the current concern over the rising costs of healthcare, achieving such a reduction in costs through importing lower-priced, skilled labor will be at the expense of skilled US workers—in this case nurses. Moreover, because the quality of patient care is difficult to observe and measure, there is the additional question of whether immigrant nurses are of the same quality as domestic nurses and whether patient care is being affected by the immigration. This is an area for future research. Our results are consistent with other studies of the effect of immigration on wages and earnings that used the area approach (see among others Card (2009) for a review). Borjas (2003) provides a summary of previous findings: “The measured impact of immigration on the wage of native workers fluctuates widely from study to study (and sometimes even within the same study), but seems to cluster around zero.” (Borjas, 2003, p. 1335) While Borjas’ quote seems apt for our results with respect to wages, we conclude somewhat more in favor of a modest, negative effect of immigration on nurses’ earnings. However, the inconsistency of findings with respect to the effect of immigration of foreign-trained nurses on US nurses’ wages and annual earnings is not easily explained and justifies our cautious conclusion. Our narrow focus had some advantages over previous work. First, we were able to identify workers directly affected by immigration. Second, we had relatively good measures of the determinants of demand for workers that could help identify supply shifts. Third, firms in the health care industry have less ability to significantly alter the production of services given regulatory and institutional constraints. While our approach yielded similarly mixed findings as much of the previous research, this narrower approach may be a productive way to proceed given the empirical problems that characterize studies of broader groups of immigrants.