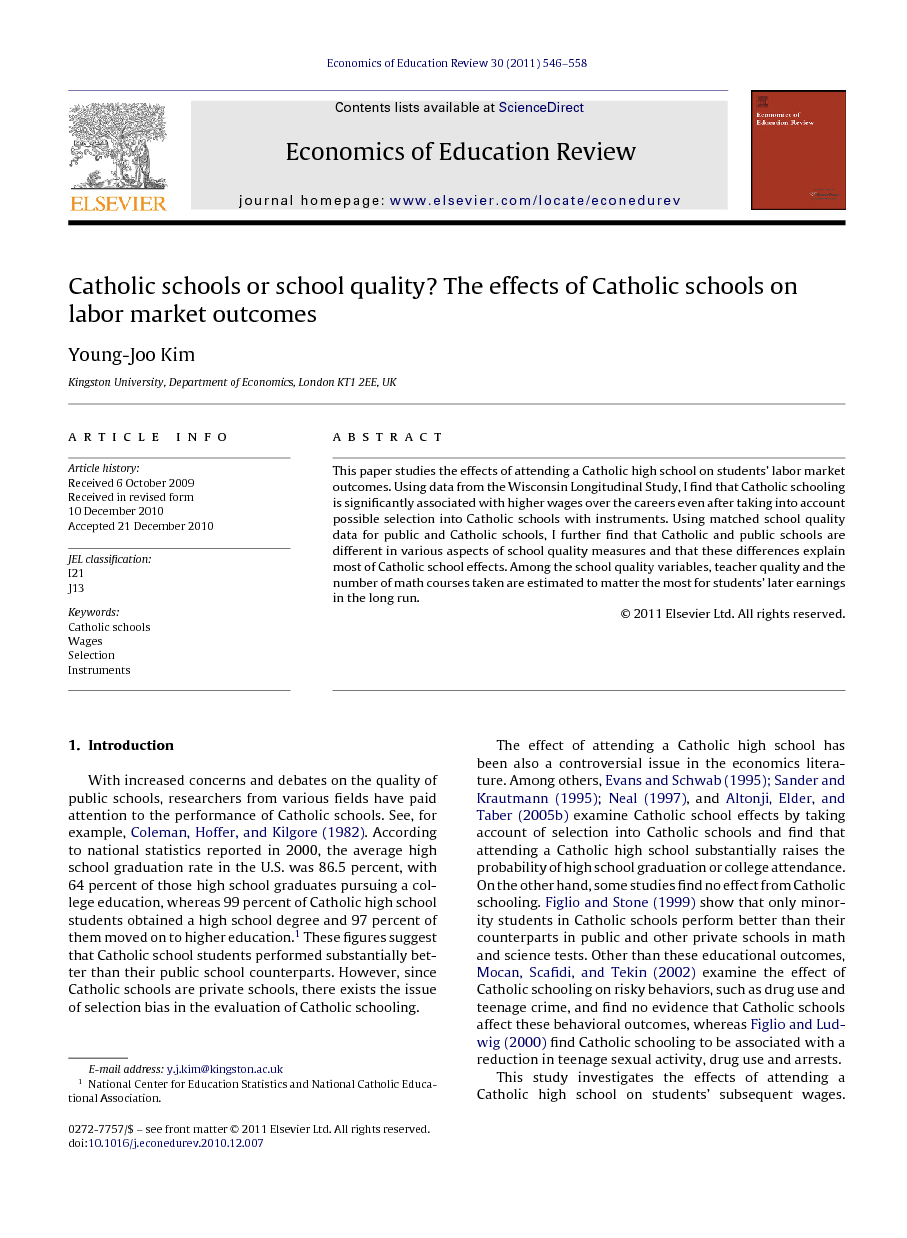 This paper studies the short and medium run impact of highly skilled immigrants from the Former Soviet Union to Israel on natives' wages and employment. If immigrants are relatively good substitutes for native workers, the impact of immigration will be largest immediately upon the immigrants' arrival, and may become smaller as the labor market adjusts to the supply shock. Conversely, if immigrants upon arrival are poor substitutes for natives, the initial effect of immigration is small, and increases over time as immigrants acquire local labor market skills and compete with native workers. We empirically examine these alternative hypotheses using data from Israel between 1989 and 1999. This paper studies the effects of attending a Catholic high school on students’ labor market outcomes. Using data from the Wisconsin Longitudinal Study, I find that Catholic schooling is significantly associated with higher wages over the careers even after taking into account possible selection into Catholic schools with instruments. Using matched school quality data for public and Catholic schools, I further find that Catholic and public schools are different in various aspects of school quality measures and that these differences explain most of Catholic school effects. Among the school quality variables, teacher quality and the number of math courses taken are estimated to matter the most for students’ later earnings in the long run.

Debate on the benefits of Catholic schooling in the literature has been concentrated on educational outcomes that have significant impacts on the labor market success. In this study I directly examine how Catholic schooling is linked to performance in the labor market. I find that Catholic schooling is significantly associated with higher wages at both early and later stages of careers. By investigating school quality resources for Catholic and public schools, I also find that the typical school resources that are commonly addressed in public school studies are the driving force behind the relative success of Catholic schools. It is worth noting that this study reinforces the importance of teacher quality reported in the previous literature and identifies other crucial components of school quality and their long-run impacts in the labor market. Previous studies on school resources including Rivkin, Hanushek, and Kain (2005) have agreed on teacher quality as a key determinant of student outcomes, but there has been little evidence that links the estimated teacher impacts with the observed teacher characteristics such as education levels.18 Compared to the literature, for example Aaronson, Barrow, and Sander (2007) which examine teacher quality impacts on high school student achievements, the effect of teacher education levels found in this study appears to be very large. One of the reasons may be that this study focuses on the impact of having a higher fraction of teachers who obtained a master or higher degree in the 1950s or earlier when the average education level was quite low. In the 1950s, less than 10 percent of people had a bachelor degree even among young adults. Another possible reason is that the effect of being taught by teachers from religious orders may be larger than that corresponding to other types of teachers. Teachers from religious orders were relatively homogeneous and tended to have spent more years in their education. Thus teachers’ education levels may contain other unobserved qualities that result in higher impacts on students. The smaller effect of teacher education from public school students supports this case. Greeley (1982) also finds that teachers from religious orders tended to provide higher quality of instruction. Therefore the measured teacher quality impacts may not necessarily be comparable to the ones in the literature that examine teacher quality from more recent data. My data set is based on a sample of students who attended high school in the peak era of Catholic schools. Enrollment in Catholic schools expanded until the early 1960s. At the same time, they were able to provide well-educated teachers with relatively small costs thanks to having religious staff. The proportion of religious staff and the student enrollment in Catholic schools have been decreasing since then, although the quality of teachers were maintained to some extent. For example, according to the Survey of Catholic Schools in the State of Wisconsin in 1970, less than 40 percent of the teaching staff were religious teachers but 30 percent of all teaching and other professional staff in Catholic schools had a master or higher degree. In this spirit, the estimates of the Catholic school effects from this study are larger than the one from more recent data that have been previously used in the literature. Yet considering that some of the key components of Catholic school effects are still prominent features of contemporary Catholic schools, one might expect the positive effects of Catholic schooling on wages documented in this study to persist until today. This is an issue well worth further study.