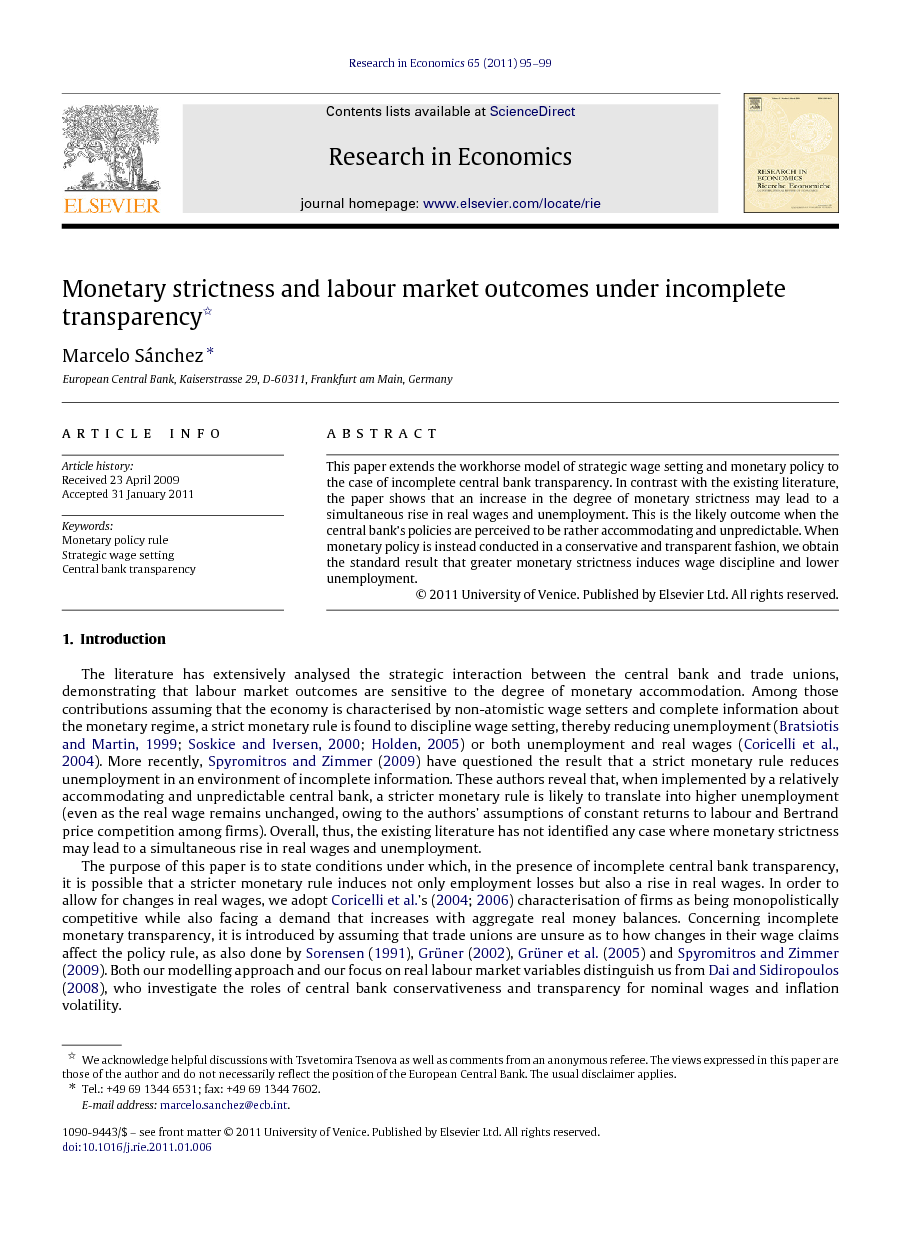 This paper extends the workhorse model of strategic wage setting and monetary policy to the case of incomplete central bank transparency. In contrast with the existing literature, the paper shows that an increase in the degree of monetary strictness may lead to a simultaneous rise in real wages and unemployment. This is the likely outcome when the central bank’s policies are perceived to be rather accommodating and unpredictable. When monetary policy is instead conducted in a conservative and transparent fashion, we obtain the standard result that greater monetary strictness induces wage discipline and lower unemployment.

The literature has extensively analysed the strategic interaction between the central bank and trade unions, demonstrating that labour market outcomes are sensitive to the degree of monetary accommodation. Among those contributions assuming that the economy is characterised by non-atomistic wage setters and complete information about the monetary regime, a strict monetary rule is found to discipline wage setting, thereby reducing unemployment (Bratsiotis and Martin, 1999, Soskice and Iversen, 2000 and Holden, 2005) or both unemployment and real wages (Coricelli et al., 2004). More recently, Spyromitros and Zimmer (2009) have questioned the result that a strict monetary rule reduces unemployment in an environment of incomplete information. These authors reveal that, when implemented by a relatively accommodating and unpredictable central bank, a stricter monetary rule is likely to translate into higher unemployment (even as the real wage remains unchanged, owing to the authors’ assumptions of constant returns to labour and Bertrand price competition among firms). Overall, thus, the existing literature has not identified any case where monetary strictness may lead to a simultaneous rise in real wages and unemployment. The purpose of this paper is to state conditions under which, in the presence of incomplete central bank transparency, it is possible that a stricter monetary rule induces not only employment losses but also a rise in real wages. In order to allow for changes in real wages, we adopt Coricelli et al.’s (Coricelli et al., 2004 and Coricelli et al., 2006) characterisation of firms as being monopolistically competitive while also facing a demand that increases with aggregate real money balances. Concerning incomplete monetary transparency, it is introduced by assuming that trade unions are unsure as to how changes in their wage claims affect the policy rule, as also done by Sorensen (1991), Grüner (2002), Grüner et al. (2005) and Spyromitros and Zimmer (2009). Both our modelling approach and our focus on real labour market variables distinguish us from Dai and Sidiropoulos (2008), who investigate the roles of central bank conservativeness and transparency for nominal wages and inflation volatility. Our set-up enables us to extend the literature on strategic wage setting by showing that a less accommodating monetary policy may raise both real wages and unemployment. This is the likely outcome when the central bank is seen as rather accommodating and opaque, which hampers the disciplining impact of a stricter monetary rule on the behaviour of unions. By having real wages–and not simply unemployment–react to monetary conditions, we allow for a better characterisation of the comovement between labour market outcomes. This aligns well with the robust evidence that real wages tend to move in the same direction as unemployment rates (see e.g. OECD, 1997 and OECD, 2004).

This paper extends the workhorse model of strategic wage setting and monetary policy to the case where central bank transparency is incomplete. We challenge one important result reported in the literature on strategic interactions between the central bank and wage setters, namely, that a stricter monetary rule would not lead to a simultaneous rise in real wages and unemployment. We instead show that real wages and unemployment are both likely to increase when the monetary authority in charge of adopting a stricter policy is known to be rather accommodating and opaque. Under a broadly similar monetary policy setting, a recent study by Spyromitros and Zimmer (2009) showed that unemployment would go up despite unchanged real wages. Our finding is more in line with empirical evidence that real wages tend to move in the same direction as unemployment rates. It also points to a more balanced interpretation of how monetary policy affects the two labour market outcomes that matter to wage setters, with the adverse effect of monetary strictness on unemployment being accompanied by an improvement in real earnings for workers.