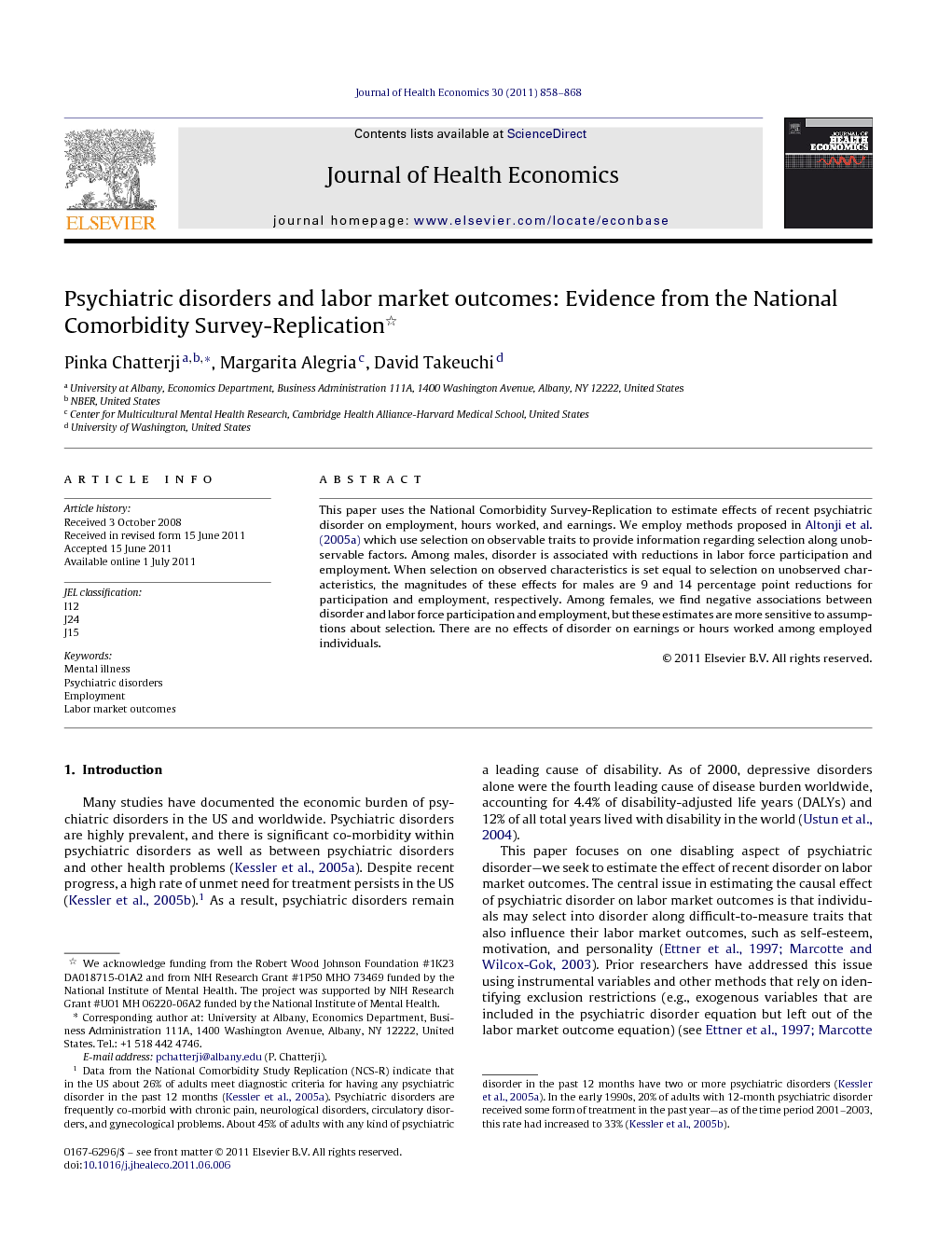 This paper uses the National Comorbidity Survey-Replication to estimate effects of recent psychiatric disorder on employment, hours worked, and earnings. We employ methods proposed in Altonji et al. (2005a) which use selection on observable traits to provide information regarding selection along unobservable factors. Among males, disorder is associated with reductions in labor force participation and employment. When selection on observed characteristics is set equal to selection on unobserved characteristics, the magnitudes of these effects for males are 9 and 14 percentage point reductions for participation and employment, respectively. Among females, we find negative associations between disorder and labor force participation and employment, but these estimates are more sensitive to assumptions about selection. There are no effects of disorder on earnings or hours worked among employed individuals.

Many studies have documented the economic burden of psychiatric disorders in the US and worldwide. Psychiatric disorders are highly prevalent, and there is significant co-morbidity within psychiatric disorders as well as between psychiatric disorders and other health problems (Kessler et al., 2005a). Despite recent progress, a high rate of unmet need for treatment persists in the US (Kessler et al., 2005b).1 As a result, psychiatric disorders remain a leading cause of disability. As of 2000, depressive disorders alone were the fourth leading cause of disease burden worldwide, accounting for 4.4% of disability-adjusted life years (DALYs) and 12% of all total years lived with disability in the world (Ustun et al., 2004). This paper focuses on one disabling aspect of psychiatric disorder—we seek to estimate the effect of recent disorder on labor market outcomes. The central issue in estimating the causal effect of psychiatric disorder on labor market outcomes is that individuals may select into disorder along difficult-to-measure traits that also influence their labor market outcomes, such as self-esteem, motivation, and personality (Ettner et al., 1997 and Marcotte and Wilcox-Gok, 2003). Prior researchers have addressed this issue using instrumental variables and other methods that rely on identifying exclusion restrictions (e.g., exogenous variables that are included in the psychiatric disorder equation but left out of the labor market outcome equation) (see Ettner et al., 1997 and Marcotte et al., 2000 for examples). These identifying assumptions frequently are hard to justify based on economic theory. In this paper, we build on prior work by examining the effect of psychiatric disorder on labor market outcomes using methods recently proposed in Altonji, Elder and Taber (AET) (2005a). Their methods do not rely on any identifying exclusion restrictions. Instead, the AET method uses observed differences between those with and without psychiatric disorder to provide information regarding the likely magnitude and direction of selection along unobserved characteristics. We also build on prior research by using more recent data from the NCS-R. In addition to being more current, the NCS-R has two main advantages over its predecessor, the National Comorbidity Survey (NCS), that are relevant to the present study. First, the NCS-R includes assessments of psychiatric disorder that are based on the DSM-IV diagnostic system rather than the now dated DSM-III-R. The DSM-IV reflects psychiatric epidemiologists’ increasing emphasis during the 1990s on requiring individuals to have significant distress or impairment in order to meet criteria for psychiatric disorder (Kessler and Merikangas, 2004). Second, the NCS-R includes somewhat more extensive information on correlates of psychiatric disorder than the NCS. For example, in the NCS-R, respondents provide not only information on whether their parents ever experienced psychiatric symptoms (which is also available in the NCS), but also about the duration of those symptoms specifically during the respondent's childhood. Our results indicate that among males, having a psychiatric disorder is associated with reductions in the likelihood of current labor force participation and in the likelihood of employment. When selection on observed characteristics is set equal to selection on unobserved characteristics, the magnitudes of these effects for males are 9 and 14 percentage point reductions for participation and employment, respectively. These findings are similar to those previously reported by Ettner et al. (1997), who use data from the National Comorbidity Survey and report that having a 12-month psychiatric disorder reduces the likelihood of employment among males by about 11 percentage points. Among females, we also find negative associations between recent disorder and labor force participation and employment. Compared to the findings for males, however, these effects for females are more sensitive to assumptions made about selection along unmeasured factors.

Our results based on the AET method indicate that if selection along unmeasured factors is equal to selection along measured factors, past year psychiatric disorder is associated with reductions of 9 and 14 percentage points in the likelihood of current labor force participation and in the likelihood of employment among males, and 19 and 13 percentage point reductions in these outcomes respectively among females (Table 4, panels A and C). Results from models estimated using the AET method suggest that in the male samples, negative effects of disorder on outcomes persist even when strong levels of positive and negative selection are imposed on the model. This is not the case for females, where we find that imposing low levels of negative selection on the model eliminates the negative effect of psychiatric disorder on labor market outcomes. Females appear to have some more complex selection issues compared to males in the sense that there is negative selection as well strong positive selection along some measured characteristics such as divorce and prior disorder. Comparing results from the AET method versus the standard bivariate probit model (Table 4, panels A and C vs. Table 2, panels A and B, column 2), we find that for the employment outcome, imposing equal selection on observables and unobservables yields estimates that are close in magnitude to those of the standard bivariate probit model. For example, using the sample of all males and implementing the AET assumption of equal selection on observables and unobservables, we find that recent disorder reduces employment by 14.1 percentage points, while the standard bivariate probit similarly suggests that recent disorder reduces the probability of employment by 15 percentage points among males. For the labor force participation outcome, the magnitudes of the findings differ somewhat across these two approaches (AET vs. standard bivariate probit), but both methods show negative and statistically significant effects of recent psychiatric disorder on labor force participation. Our AET findings are reasonably similar in magnitude to those previously reported by Ettner et al. (1997), who use data from the National Comorbidity Survey and report that having a 12-month psychiatric disorder reduces the likelihood of employment among males by about 11 percentage points. However, it is puzzling that unlike Ettner et al. (1997), Marcotte et al. (2000) and others, we find no effects of recent disorder on work hours and earnings. This may be due to the somewhat stronger economy of the early 2000s—during the time period when the NCS data were collected (1990–1992) overall unemployment rates ranged from 5.6 to 7.5%, while these rates were 4.7–6.0% during the time period when the NCS-R were collected (2001–2003) (Bureau of Labor Statistics, 2010). Moreover, in analyses shown in Chatterji et al. (2008), we find that substance disorders appear to have limited impact on labor market burden, which is not consistent with prior research. This discrepancy might be related to the way the CIDI appears to underestimate the prevalence of substance disorders (Grant et al., 2007) and/or the social desirability of self-reporting substance use in a face to face interview.21 Using longitudinal data to study indirect effects may be a useful way to shed light on the economic implications of negative and positive selection. In the case of negative selection, individuals may have unmeasured personal attributes (e.g., low self-esteem, poor interpersonal skills) that increase risk for psychiatric disorder and directly detract from labor market outcomes. In addition to these direct effects, these attributes also may indirectly affect labor market outcomes by interfering with human capital development earlier in life. Similarly, the strong degree of positive selection we find among females requires further study of indirect effects. Certain personality traits and behaviors may increase risk of psychiatric disorder and also directly improve labor market outcomes for women. However, it seems likely that indirect channels also will be important. Future research should consider these potential indirect effects of psychiatric disorder using longitudinal data.