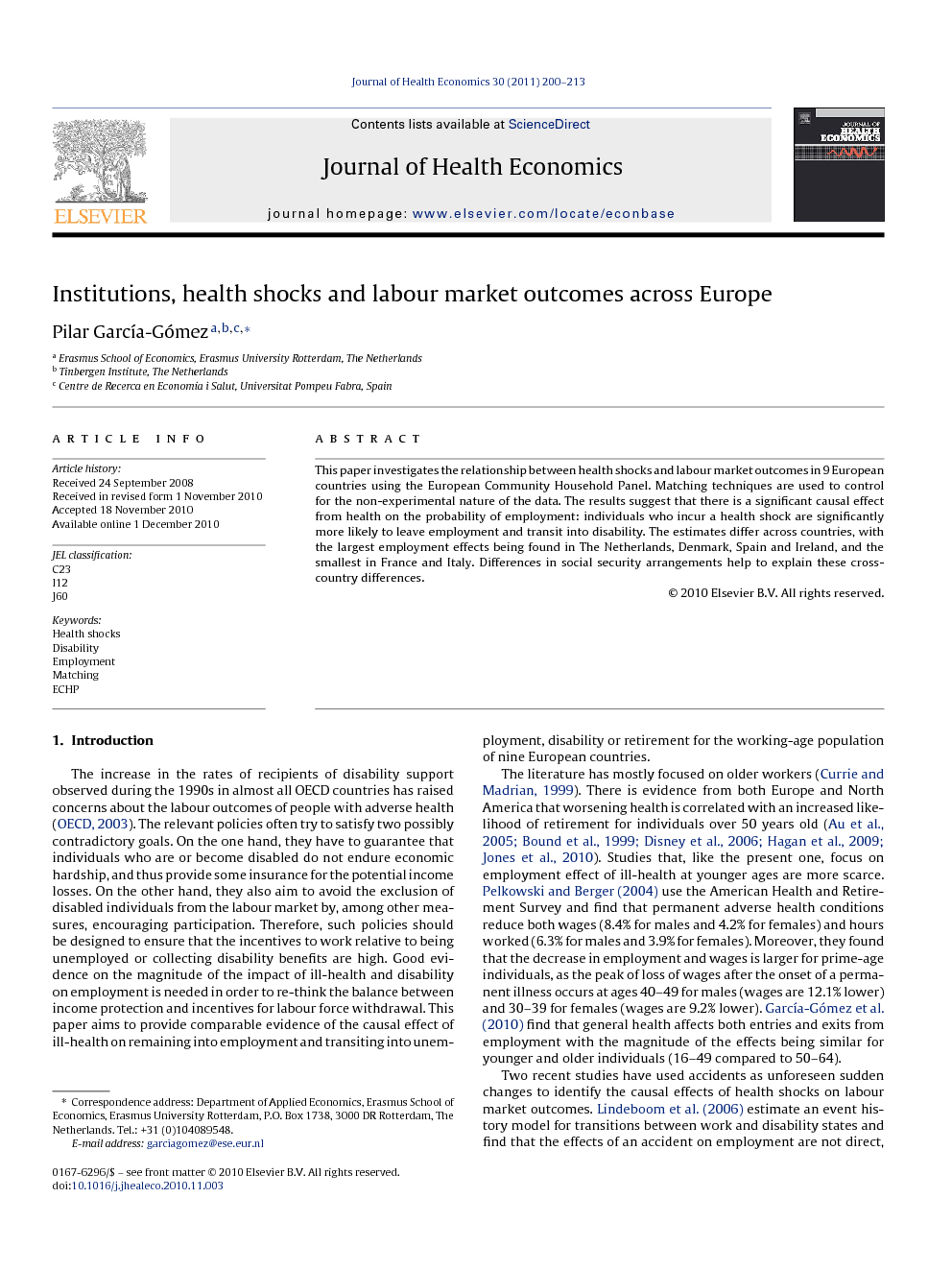 This paper investigates the relationship between health shocks and labour market outcomes in 9 European countries using the European Community Household Panel. Matching techniques are used to control for the non-experimental nature of the data. The results suggest that there is a significant causal effect from health on the probability of employment: individuals who incur a health shock are significantly more likely to leave employment and transit into disability. The estimates differ across countries, with the largest employment effects being found in The Netherlands, Denmark, Spain and Ireland, and the smallest in France and Italy. Differences in social security arrangements help to explain these cross-country differences.

This paper presents evidence suggesting that the occurrence of a health shock has a causal effect on the probability of being in employment. Interestingly, the magnitude of the effect differs across countries. There are two countries (France and Italy) where the point estimate for this effect is not statistically significant. On the other hand, the largest effects exceed 6% in Denmark, The Netherlands, Spain and Ireland. In general, the magnitude of these effects is high in relative terms, because the chances of being non-employed are more than 10% higher compared to the probability that treated individuals would have faced had they not suffered a health shock, and they are even more than 60% higher among the old Danish and the young Dutch. In addition, the subgroup analysis brings out that the probability of leaving employment and transiting into inactivity among the young workers (aged 16–49) is non-negligible. This should be a cause of concern, as the outflow from inactivity is known to be close to zero (OECD, 2003). The results also suggest that the chances of an individual staying in employment after a health shock are affected by the disability policies in his country. For example, in Ireland, one of the countries where the effect of a health shock on the probability of employment is highest, individuals who experience a disability cannot even opt to work part-time if they want to be entitled to disability benefits. The corresponding effect is not significantly different from zero in France and Italy, the two countries that apply the highest mandatory quotas for disabled workers (7% Italy and 6% France). Concerning income adequacy after a health shock, it has been argued (OECD, 2003) that disabled individuals who are employed earn on average as much as non-disabled employed individuals, but they are better off than disabled individuals who do not work. In this context it is unfortunate that some countries have institutional arrangements that are relatively more conducive to withdrawal from the labour force after an individual suffers a health shock. Inevitably not all individuals who suffer a health shock could or should be employed. Many individuals with a short-term health problem may have jobs to return to once they recover from their illness. Other individuals, because of their illness, age or local market characteristics may not be capable to work. However, these results are consistent with the idea that there are individuals whose incentives to remain in the labour market are affected by social security arrangements in a substantial way. In addition, these results also suggests that a health shock tends to reduce activity more in countries where the integration dimension of disability policies is lower (Ireland) than in countries that score high on this dimension (Denmark and The Netherlands). However, the higher likelihood of a transition to unemployment in Denmark and The Netherlands could also be the result of their higher unemployment replacement rates. These results cast some doubt on the view held by, for example, the OECD (2003) that unemployment systems with long benefit periods are likely to reduce the pressure on disability programmes. In particular the results for Belgium are at odds with this notion. Belgians are entitled to an unlimited period of unemployment benefits, so according to the OECD's stylised fact, we should expect them to transit to unemployment after an adverse health shock. However, the estimates show that health shocks cause transitions to inactivity instead. The results also show that, except in Denmark (where individuals can claim early retirement on grounds of an adverse social situation) and Greece (where individuals can retire with full pension at age 55), a health shock has no effect on the probability of retirement. This is not an unexpected result in Ireland and Portugal where individuals need to be unemployed before being able to become early retirees. For these two countries, the significant increases in the probability of reporting inactivity and the non-significant effect on the probability of reporting unemployment after a health shock duly reflect this institutional feature. The health measures used are all based on subjective perceptions, and although the methods used help to minimise the problems of endogeneity, justification bias and unobserved heterogeneity, there could still be some differences across countries in the objective health changes associated with these measures of health shocks. However, any such differences cannot entirely explain the differences in the estimates across countries. An indirect test of the latter assertion is that there is no association between the proportion of treated individuals who report being hampered and the estimated causal effects. For example, in France and Ireland around 8% of the individuals in the treated group defined by a drop in self-assessed health declare to be severely hampered in their daily activities by a chronic physical or mental health problem, illness or disability, but the employment effects discussed earlier are clearly different in these two countries (no effect for France and above 11% in Ireland). In addition, the robustness of the results - both in sign and magnitude - to the two health measures used (drop in self-assessed health and onset of chronic condition) adds further confidence in our two main findings, i.e. (i) the importance of health as a causal determinant of labour market transitions and (ii) the existence of differences in the magnitude of these effects across European countries. The analysis also identifies lines for future research. First, it would be of interest to analyse transitions between the different non-employment states. A specific aim could consist of testing whether individuals transit from unemployment to inactivity and/or to employment once unemployment benefits expire. Another useful avenue of research, in order to assess the relative effects of reintegration policies across countries, would be to try to analyse differences in the outflow from inactivity after individuals recover from their adverse health episodes. Notwithstanding these research needs, the results presented in this paper show that more inspiration is needed in order to avoid the adverse employment effects detected in some European countries. The good news is that there seems to be scope for learning from the experience in neighbouring countries.