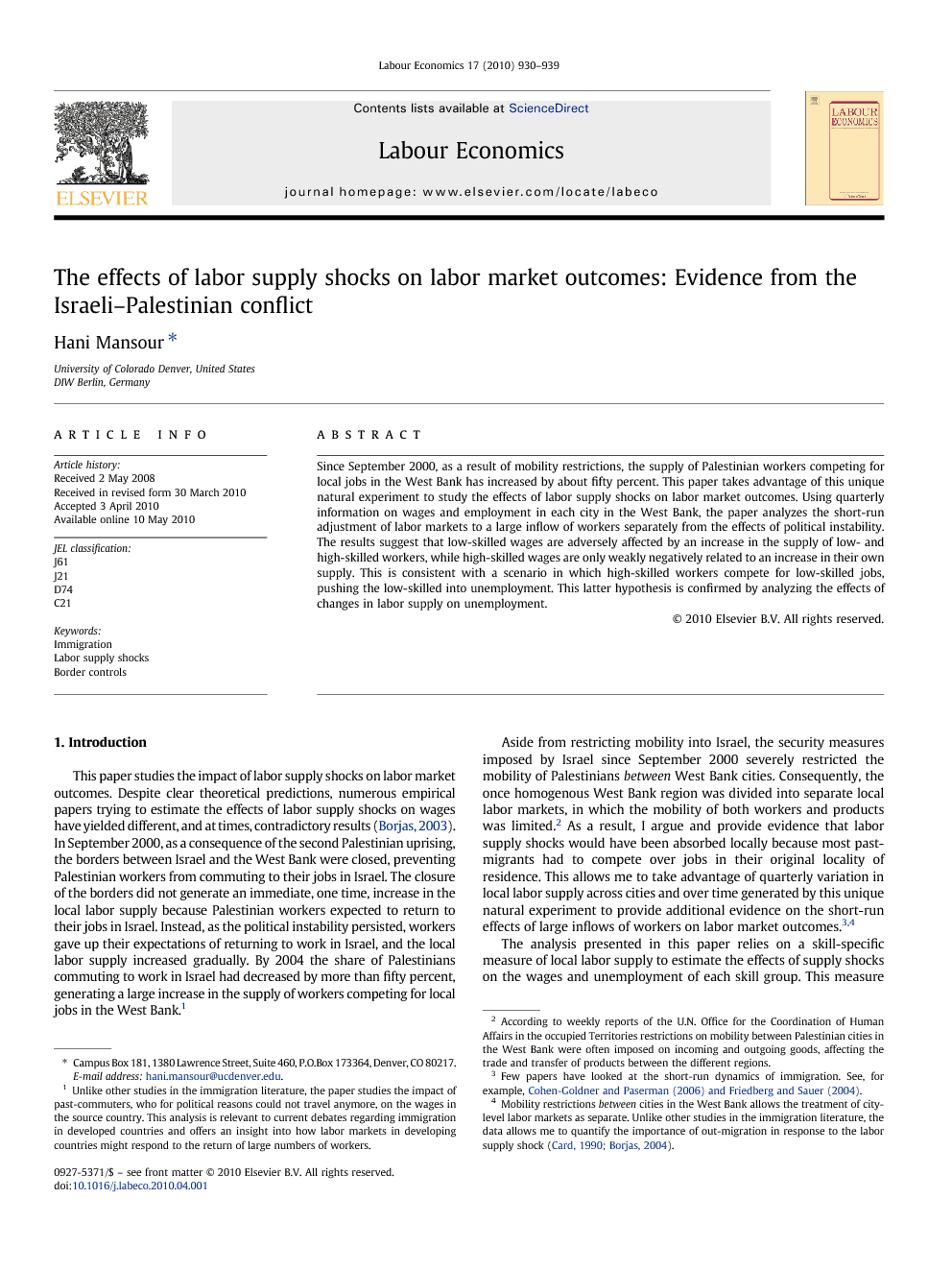 Since September 2000, as a result of mobility restrictions, the supply of Palestinian workers competing for local jobs in the West Bank has increased by about fifty percent. This paper takes advantage of this unique natural experiment to study the effects of labor supply shocks on labor market outcomes. Using quarterly information on wages and employment in each city in the West Bank, the paper analyzes the short-run adjustment of labor markets to a large inflow of workers separately from the effects of political instability. The results suggest that low-skilled wages are adversely affected by an increase in the supply of low- and high-skilled workers, while high-skilled wages are only weakly negatively related to an increase in their own supply. This is consistent with a scenario in which high-skilled workers compete for low-skilled jobs, pushing the low-skilled into unemployment. This latter hypothesis is confirmed by analyzing the effects of changes in labor supply on unemployment.

This paper studies the impact of labor supply shocks on labor market outcomes. Despite clear theoretical predictions, numerous empirical papers trying to estimate the effects of labor supply shocks on wages have yielded different, and at times, contradictory results (Borjas, 2003). In September 2000, as a consequence of the second Palestinian uprising, the borders between Israel and the West Bank were closed, preventing Palestinian workers from commuting to their jobs in Israel. The closure of the borders did not generate an immediate, one time, increase in the local labor supply because Palestinian workers expected to return to their jobs in Israel. Instead, as the political instability persisted, workers gave up their expectations of returning to work in Israel, and the local labor supply increased gradually. By 2004 the share of Palestinians commuting to work in Israel had decreased by more than fifty percent, generating a large increase in the supply of workers competing for local jobs in the West Bank.1 Aside from restricting mobility into Israel, the security measures imposed by Israel since September 2000 severely restricted the mobility of Palestinians between West Bank cities. Consequently, the once homogenous West Bank region was divided into separate local labor markets, in which the mobility of both workers and products was limited. 2 As a result, I argue and provide evidence that labor supply shocks would have been absorbed locally because most past-migrants had to compete over jobs in their original locality of residence. This allows me to take advantage of quarterly variation in local labor supply across cities and over time generated by this unique natural experiment to provide additional evidence on the short-run effects of large inflows of workers on labor market outcomes. 3, 4 The analysis presented in this paper relies on a skill-specific measure of local labor supply to estimate the effects of supply shocks on the wages and unemployment of each skill group. This measure calculates the share of the employed locally and the unemployed from the entire working force, which includes workers usually reporting to work in Israel. Workers who report Israel as their work location can be currently employed in Israel or unemployed but expect to return. Thus, this measure incorporates the expectations of Palestinian workers about their chances of returning back to Israel. 5 The main identifying assumption is that variation in the number of workers from each city reporting Israel as their usual place of work varies over time for reasons that are uncorrelated with economic conditions at the city-level, and are determined by Israeli security measures. Of course, one could expect that the decline in economic activity due to political instability might also vary quarterly across different cities and be correlated with the quarterly measure of labor supply attenuating the causal effects of labor supply shocks on wages. To deal with this issue, I include in the regressions city-specific measures of political instability to capture any remaining differences in the demand shocks across cities, along with a time trend to capture demand shocks affecting the entire region, and city fixed effects to capture time-invariant characteristics of each city. I also provide some instrumental variable results and conduct a robustness check to confirm my findings. The most conservative results in the paper suggest that a 10% increase in the supply of low-skilled workers reduces low-skilled wages by about 1%. Interestingly, an increase of 10% in the supply of high-skilled workers also reduces low-skilled wages by about 1.5–2%. This suggests that high-skilled workers who could not commute to Israel anymore competed for low-skilled jobs, pushing the low-skilled into unemployment. This hypothesis is confirmed by estimating the effect of labor supply on low-skilled unemployment rates. I find that an increase in the number of low- and high-skilled workers who report Israel as their usual work location reduces the unemployment rate among the low-skilled. As for the high-skilled workers, the results suggest that an increase in their own labor supply decreases their wages slightly, but these effects are not as precisely estimated. An increase in the low-skilled labor supply has no effect on high-skilled wages. The wage results are consistent with the effects on the unemployment rates of high-skilled workers. Differences in the effects across skill groups also suggest that the estimates are not picking up demand-related factors or direct effects of the political instability which, as previous research has shown, have impacted all workers (Miaari and Sauer, 2006). The second section of the paper outlines the most notable events in the Palestinian–Israeli conflict since 1967 and their economic relations. The third section discusses the data. The identification strategy and the results are presented in the fourth section. I conclude and discuss the results in the fifth section.