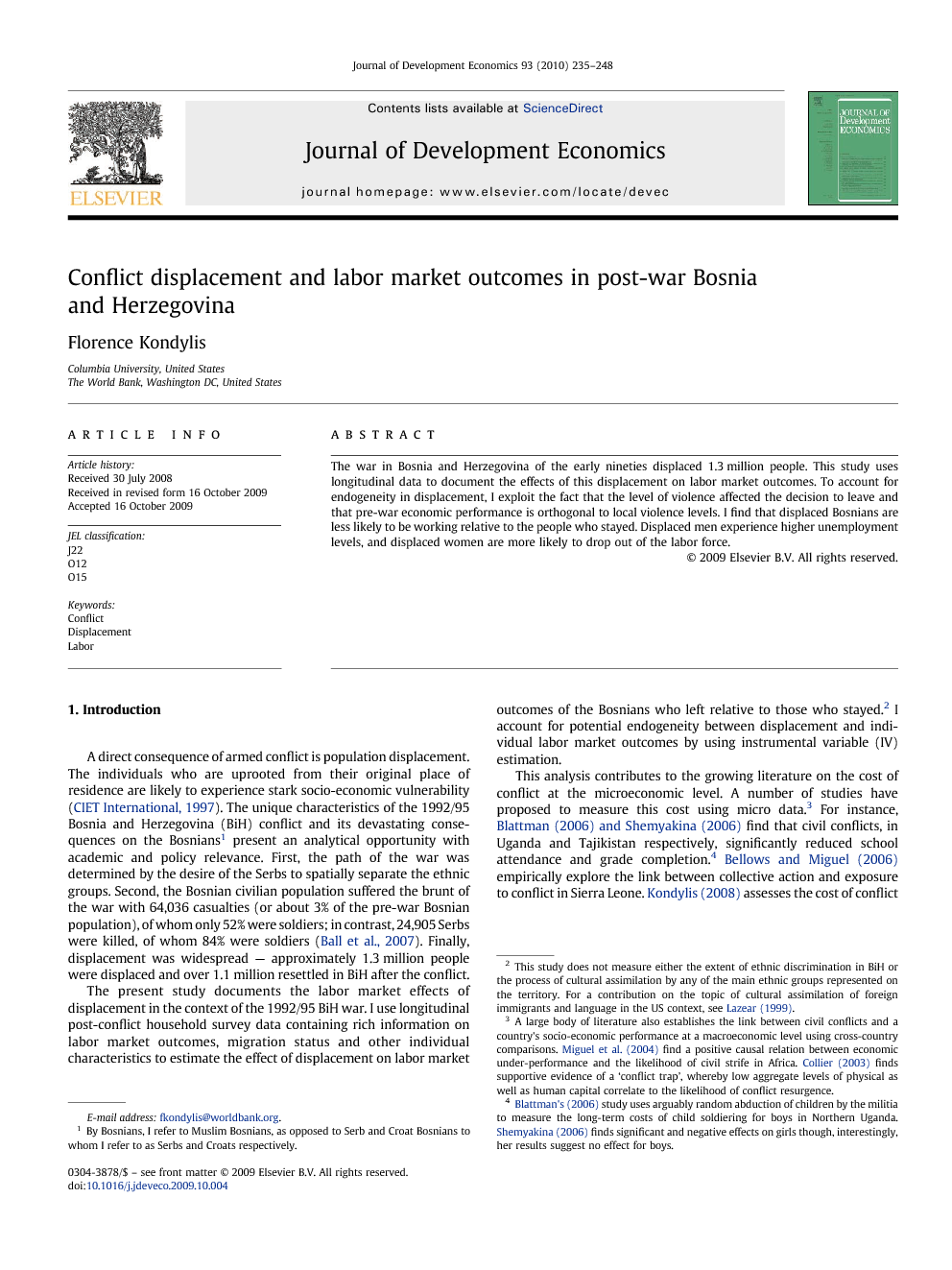 The war in Bosnia and Herzegovina of the early nineties displaced 1.3 million people. This study uses longitudinal data to document the effects of this displacement on labor market outcomes. To account for endogeneity in displacement, I exploit the fact that the level of violence affected the decision to leave and that pre-war economic performance is orthogonal to local violence levels. I find that displaced Bosnians are less likely to be working relative to the people who stayed. Displaced men experience higher unemployment levels, and displaced women are more likely to drop out of the labor force.

A direct consequence of armed conflict is population displacement. The individuals who are uprooted from their original place of residence are likely to experience stark socio-economic vulnerability (CIET International, 1997). The unique characteristics of the 1992/95 Bosnia and Herzegovina (BiH) conflict and its devastating consequences on the Bosnians1 present an analytical opportunity with academic and policy relevance. First, the path of the war was determined by the desire of the Serbs to spatially separate the ethnic groups. Second, the Bosnian civilian population suffered the brunt of the war with 64,036 casualties (or about 3% of the pre-war Bosnian population), of whom only 52% were soldiers; in contrast, 24,905 Serbs were killed, of whom 84% were soldiers (Ball et al., 2007). Finally, displacement was widespread — approximately 1.3 million people were displaced and over 1.1 million resettled in BiH after the conflict. The present study documents the labor market effects of displacement in the context of the 1992/95 BiH war. I use longitudinal post-conflict household survey data containing rich information on labor market outcomes, migration status and other individual characteristics to estimate the effect of displacement on labor market outcomes of the Bosnians who left relative to those who stayed.2 I account for potential endogeneity between displacement and individual labor market outcomes by using instrumental variable (IV) estimation. This analysis contributes to the growing literature on the cost of conflict at the microeconomic level. A number of studies have proposed to measure this cost using micro data.3 For instance, Blattman, 2006 and Shemyakina, 2006 find that civil conflicts, in Uganda and Tajikistan respectively, significantly reduced school attendance and grade completion.4Bellows and Miguel (2006) empirically explore the link between collective action and exposure to conflict in Sierra Leone. Kondylis (2008) assesses the cost of conflict at the household level with regard to agricultural productivity in Rwanda.5 This is the first study to assess the effect of conflict-induced displacement on the labor market outcomes of displaced individuals accounting for potential selection issues. Displacement status is defined using the date of the last migration: a person who reports having migrated during the period of the conflict or soon after — while resettlement and returns were still occurring on a large scale — is considered a displaced person, regardless of whether or not she resettled in her municipality6 of origin. Hence, the effect of displacement is averaged over those who returned to their municipality of origin and those who did not. Displaced individuals (refugees) who did not return to BiH by 2001/04 are not observed in the data. I discuss the implication this might have on the estimates of the effect of displacement on labor market outcomes in the next sub-section. Typically, displacement as such is contaminated by problems of self-selection that might create endogeneity issues when displacement is used as a regressor in a labor market specification. Therefore, using OLS to estimate the effect of displacement would likely produce inconsistent estimates. I exploit spatial variations in the level of violence against Bosnians during the 1992/95 war to provide consistent two-step estimates of the cost of displacement on labor market outcomes. Indeed, the pattern of the Serb invasions in the 1992/95 BiH war was governed by the will to create an ethnically homogenous and contiguous Serb territory (UN, 1994, UNHCR, 1998, Burg and Shoup, 1999, Nation, 2003 and Toal and Dahlman, 2004); consequently, pre-war economic performance and the level of violence endured in a given municipality are unlikely to be systematically associated. In addition, local violence is likely to accurately predict displacement. Therefore, local violence can be used as an instrumental variable to purge the estimates of the impact of displacement of potential inconsistency. An attractive feature of the data is that municipality of residence before the war, or “municipality of origin”, is recorded for all adults. Individuals can, therefore, be matched to their municipality of origin and can be assigned the corresponding level of violence using municipality level population loss data (RDCS, 2007). Since the exclusion restriction assumption of zero correlation between economic performance and the level of violence is central to this analysis, I perform a number of robustness and falsification exercises to assess its validity. All results suggest that this is a reasonable assumption. Non-random sorting of displaced individuals into their municipality of destination also poses a potential threat to the consistency of the regression estimates. In the absence of a credible instrument for the assignment of individuals to their municipalities of destination, I use municipality of destination fixed-effects to capture the potential non-random location of individuals within BiH. This allows me to exploit variations in the level of violence across municipalities of origin for identification while accounting for heterogeneity across municipalities of destination. The results show that displacement negatively impacted the labor market outcomes of Bosnian men and women, particularly in terms of access to employment. Interestingly, the effect of lower employment on participation in the labor market varies by gender. Whereas low employment entirely translates into higher unemployment for men, it implies lower participation for women. The results obtained when displacement is instrumented substantially exceed the one-step estimates, suggesting that Bosnian men and women positively selected into displacement, i.e. that the more “able” were more likely to leave. I also test for assimilation of displaced men and women into the labor market over the 2001/04 period and cannot reject that the effect of displacement is invariant across waves of the panel. In all gender groups, I find no additional effect of education on labor market outcomes for the displaced. The informality of the labor market in BiH and the destruction of networks are plausible candidates to explain the high cost of displacement in terms of labor market outcomes and also help rationalize the lack of an effect on participation for displaced men. The next sub-section introduces some background on the war and the post-war reconstruction in BiH. In the second section I present the data and some descriptive evidence. The empirical strategy is detailed in the third section. The econometric results are presented in the fourth section and discussed in the fifth section. A sixth section briefly concludes.

The last 40 years have seen an increase in the incidence and the average length of civil conflicts (Azam et al., 2001). As the positive relation between conflict resurgence and poverty is well established, promoting sustainable economic growth in a post-conflict context is a compelling priority. Since displacement is associated to high economic vulnerability, documenting the access to the labor market for the displaced has particular policy relevance. The contribution of this study to the literature on the economics of civil conflict is twofold. First, it consistently estimates the causal effect of displacement on the post-war labor market performance of the displaced. Second, it brings some support to the idea that the selection of Bosnian men and women into displacement during the 1992/95 BiH war was of a positive nature, as more “able” individuals in terms of labor market performance were more likely to be displaced. My results suggest an increase in the probability of worklessness by over 15 percentage points for men and women alike. Overall, the magnitude of the negative effect of displacement on work, measured 6 years after the end of the 1992/95 war, raises particular concern for the economic vulnerability of displaced persons in BiH.