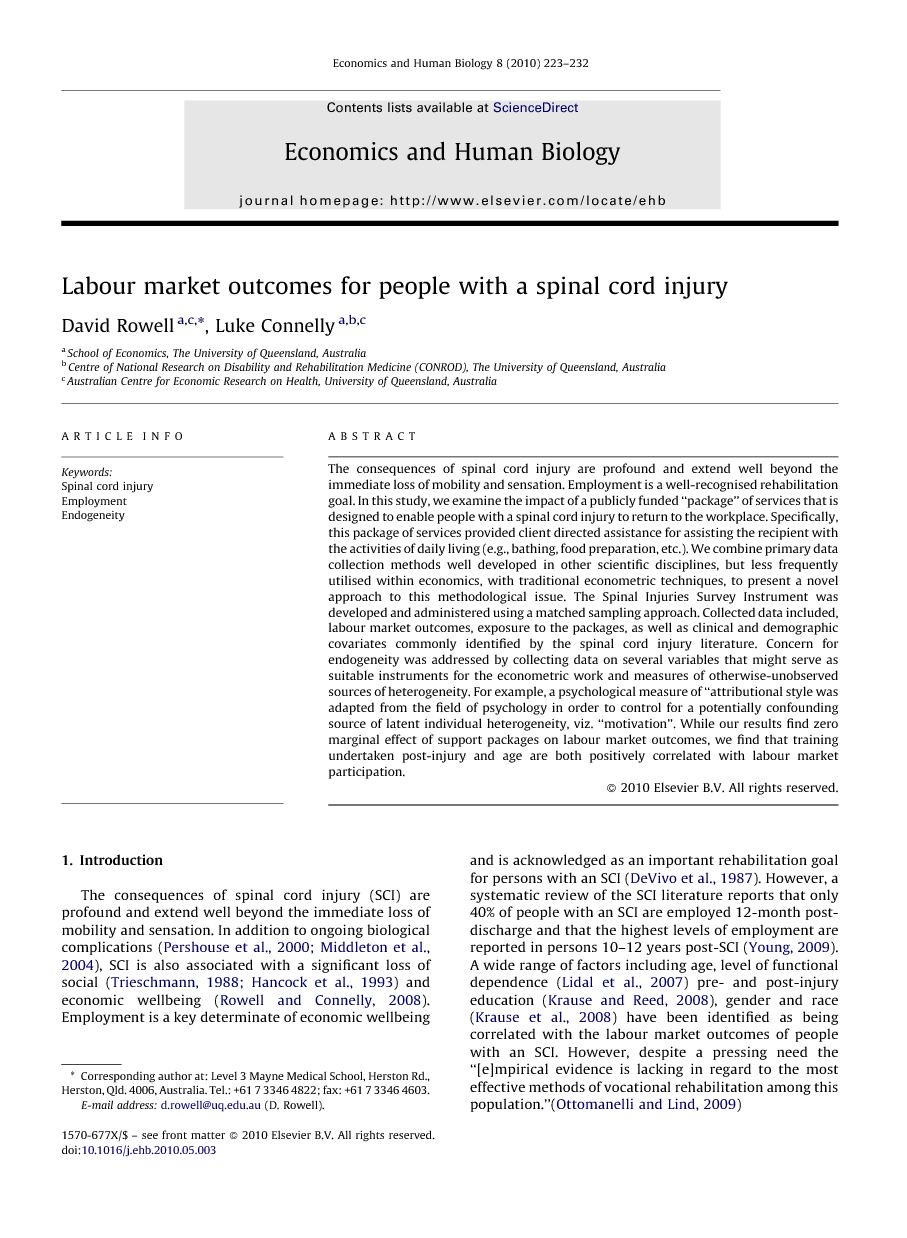 The consequences of spinal cord injury are profound and extend well beyond the immediate loss of mobility and sensation. Employment is a well-recognised rehabilitation goal. In this study, we examine the impact of a publicly funded “package” of services that is designed to enable people with a spinal cord injury to return to the workplace. Specifically, this package of services provided client directed assistance for assisting the recipient with the activities of daily living (e.g., bathing, food preparation, etc.). We combine primary data collection methods well developed in other scientific disciplines, but less frequently utilised within economics, with traditional econometric techniques, to present a novel approach to this methodological issue. The Spinal Injuries Survey Instrument was developed and administered using a matched sampling approach. Collected data included, labour market outcomes, exposure to the packages, as well as clinical and demographic covariates commonly identified by the spinal cord injury literature. Concern for endogeneity was addressed by collecting data on several variables that might serve as suitable instruments for the econometric work and measures of otherwise-unobserved sources of heterogeneity. For example, a psychological measure of “attributional style was adapted from the field of psychology in order to control for a potentially confounding source of latent individual heterogeneity, viz. “motivation”. While our results find zero marginal effect of support packages on labour market outcomes, we find that training undertaken post-injury and age are both positively correlated with labour market participation.

The consequences of spinal cord injury (SCI) are profound and extend well beyond the immediate loss of mobility and sensation. In addition to ongoing biological complications (Pershouse et al., 2000 and Middleton et al., 2004), SCI is also associated with a significant loss of social (Trieschmann, 1988 and Hancock et al., 1993) and economic wellbeing (Rowell and Connelly, 2008). Employment is a key determinate of economic wellbeing and is acknowledged as an important rehabilitation goal for persons with an SCI (DeVivo et al., 1987). However, a systematic review of the SCI literature reports that only 40% of people with an SCI are employed 12-month post-discharge and that the highest levels of employment are reported in persons 10–12 years post-SCI (Young, 2009). A wide range of factors including age, level of functional dependence (Lidal et al., 2007) pre- and post-injury education (Krause and Reed, 2008), gender and race (Krause et al., 2008) have been identified as being correlated with the labour market outcomes of people with an SCI. However, despite a pressing need the “[e]mpirical evidence is lacking in regard to the most effective methods of vocational rehabilitation among this population.”(Ottomanelli and Lind, 2009) In this study, we examine the impact of a publicly funded “package” of services that is designed to enable people with a SCI to return to the workplace. Specifically, this package of support provided for between 6 and 67 h of career support per week, the purpose of which is to help the recipient with the activities of daily living (e.g., bathing, food preparation, etc.) that are necessary preconditions for being able to go to work. These packages are administered by a public agency called Disability Services Queensland, which labels these funding packages as “Adult Lifestyle Support Packages”. Conceptually the “package” of services is similar to a broader set of polices that are designed to integrate the unemployed in to the workforce by either (i) facilitating job search, (ii) improving work habits or (iii) augmenting human capital (Heckman, 1979). Undoubtedly, the implications of our methodology have utility beyond this small, albeit important, population of people with a SCI. The purpose of this study was to test the role that support schemes play with respect to labour market participation and employment. A search of the literature identified just three quantitative studies which analysed the effect of vocational initiatives for people with SCI. Krueger and Kruse (1995) use a probit model to analyse the effect that computer competence has had on labour market experiences of people with a SCI, in New Jersey. They report that pre-injury computer skills are not correlated with the probability of post-injury employment but that computer use in the work place was positively correlated with the log of wages. Pell et al. (1997) also examined the impact of computer skills on a sample of people with SCI in Queensland, Australia. Logistic regression is used to report that both the level of computer skill and training were significantly correlated with employment. Valtonen et al. (2006) use logistic regression to report that non-participation in vocational rehabilitation was positively correlated with unemployment. However, these authors have not considered if programme participation was endogenously determined. Unobserved personality traits, which facilitate employment, may also have influenced participation in vocational initiatives. Economics has long recognised that variable omission has the potential to compromise statistical inference when the error term is correlated with the explanatory variable. For example Working (1927) argued that when estimating a demand function, the omission of variables which captured supply side responses to price changes can lead to spurious results. Econometric solutions to omitted variable bias have included the use of instrumental variables (Wright, 1928), 2-stage least squares (Theil, 1958) and the ‘heckit’ model (Heckman, 1979) to control for sample selection bias. Contemporary statistical analysis from the fields of epidemiology (Zohoori, 1997), sociology (Berk, 1983) and political science (Clarke, 2005) have now, also, begun to consider the implications of endogeneity. Alternatively, other scientific disciplines have sought to control for omitted variable bias through the purposeful collection of primary data. Clearly, an opportunity exists to exploit a comparative advantage. From the discipline of economics, we drew upon a rich tradition of econometric techniques designed to control for endogeneity in datasets with a fixed set of variables. From other scientific disciplines such as psychology and epidemiology, we drew upon an extensive history of survey design and primary data collection. We therefore designed and administered, a survey instrument the Spinal Injuries Survey Instrument (SISI) (Rowell and Connelly, 2008) to a matched sample of members of the SIA in Queensland to collect data to serve as potential proxies and or instruments for unobserved sources of heterogeneity within the sample and then apply econometric measures to mitigate endogeneity. The hypotheses of interest concern the effects of the publicly funded support package provided to Queenslanders living with a disability the Adult Lifestyle Support Package (ALSP) on the (i) labour market participation by people with SCIs and (ii) employment outcomes for people with SCIs. Of central importance are the following hypotheses, expressed in the null: H0A. The provision of an ALSP does not affect the labour market participation of people with SCIs. H0B. The provision of an ALSP does not affect the chance of a person with an SCI being employed. It is unclear whether one should expect these null hypotheses to be rejected. The ALSP's influence is theoretically ambiguous. The reasoning is as follows. First, to the extent that the ALSP assists individuals in activities of daily living, its provision could reduce the opportunity costs of employment for people with SCIs by lowering the transactions costs associated of employment (e.g., the costs of getting ready for work and getting to work). On the other hand, depending on individuals preferences and particularly the strength of the labour-leisure trade off, some individuals could be less inclined to seek paid employment if they receive support via the ALSP.