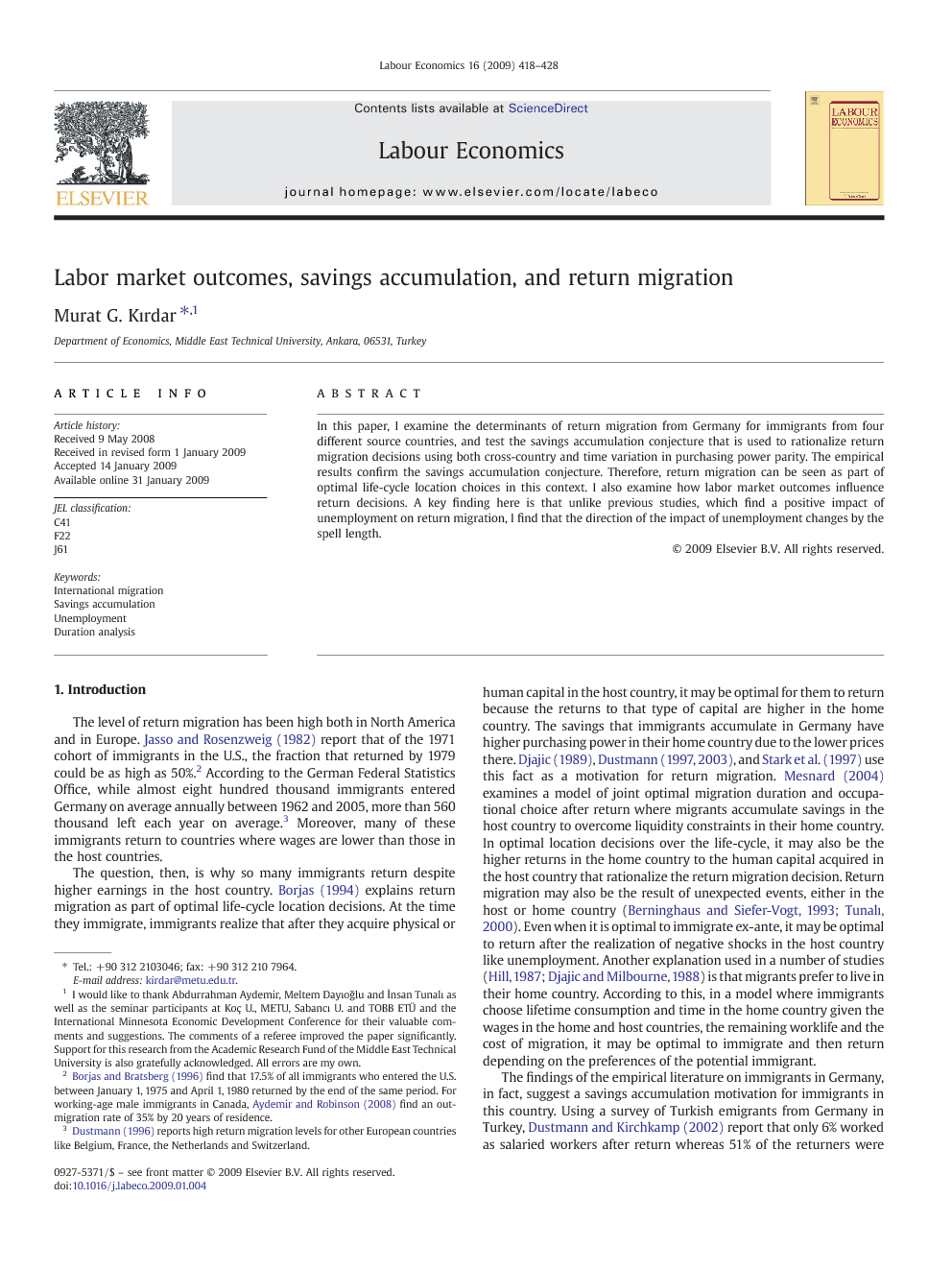 In this paper, I examine the determinants of return migration from Germany for immigrants from four different source countries, and test the savings accumulation conjecture that is used to rationalize return migration decisions using both cross-country and time variation in purchasing power parity. The empirical results confirm the savings accumulation conjecture. Therefore, return migration can be seen as part of optimal life-cycle location choices in this context. I also examine how labor market outcomes influence return decisions. A key finding here is that unlike previous studies, which find a positive impact of unemployment on return migration, I find that the direction of the impact of unemployment changes by the spell length.

In this paper, I test the savings accumulation conjecture proposed in rationalizing return migration decisions in the context of immigrants in Germany using exogenous variation in purchasing power parity, and examine how labor market outcomes like unemployment and retirement influence the return migration decision. In addition, I characterize the level and timing of return migration behavior as well as the selection in it, and derive a number of implications of these regarding the impact of immigrants. The empirical analysis uses a rich micro level data set (German Socioeconomic Panel) as well as macro level data that display both cross-country and time variation. In the estimation, I use a flexible duration analysis method. I find that purchasing power parity is in fact an important determinant of return migration behavior from Germany. A higher ppp decreases the return propensity of younger immigrants while increasing it for older ones. In other words, while the substitution effect, the opportunity cost of the purchasing power of foregone savings, dominates for younger immigrants; the income effect, the higher purchasing power of already accumulated savings, dominates for older immigrants. Quantitatively, a 25% increase in ppp from an initial level of 1 decreases the odds of returning by 64% for an 18-year-old immigrant while increasing it by 16% for a 50-year-old immigrant. This confirms the conjecture that an important motivation of these immigrants' residence in Germany is to accumulate savings. Therefore, return migration, in this context, can be seen as part of optimal life-cycle location decisions, where immigrants return when the marginal benefit of higher savings falls below the marginal cost of staying. Moreover, the fact that these immigrants migrate to Germany primarily to accumulate savings implies that the return of the accumulated savings in Germany along with the returning migrants could make an important contribution to the source country economies. Another contribution of the paper is with regard to the impact of unemployment on return migration decisions. The previous empirical literature uncovered negative selection in terms of employment status in return migration from Germany. However, what I find is that the answer to this question depends on the length of the unemployment spell. Immigrants whose unemployment spells are shorter than 3 years are in fact more likely to return. On the other hand, older working-age immigrants with longer unemployment spells are more likely to stay. Given the generosity of the German unemployment insurance system in terms of the duration of the benefits, it is no surprise that older long-term unemployed immigrants with a small chance of finding employment in either country prefer to stay in Germany whereas younger short-term unemployed immigrants are more likely to return once they realize that they will not be able to attain their savings accumulation goal due to poor employment prospects. Examining the distribution of unemployment spells of immigrants in Germany, I find that the proportion of unemployed immigrants for whom unemployment decreases return migration probability is much higher. That the long-term unemployed immigrants are more likely to stay and that there is very strong state dependence in unemployment suggest that return policies targeted toward this group, such as financial bonuses conditional on return, could be beneficial for the German unemployment insurance system. The amount of financial bonuses which would encourage these immigrants to return could be less than the total amount of unemployment benefits that are going to be paid in many years. In fact, the results of this study also indicate that a similar policy that was implemented in 1984 to encourage immigrants to return to their home countries increased the return rates of Turkish immigrants significantly at that year. Retirement has a strong impact on return migration of immigrants from Germany. The return probability within the first year after qualification for retirement increases more than sevenfold. This implies that return migration significantly alleviates the potential burden an aging immigrant population would exert on the health insurance system in Germany. Even when the German government pays the health expenses of an immigrant after return, it will be relatively less costly as health-care expenses are lower in the source countries than in Germany. This paper also characterizes the level and timing of return behavior. The level of return migration is quite high and exhibits significant variation according to country of origin. Immigrants from wealthier countries are more likely to return. However, the evidence for differences across the country of origin groups vanishes once the variations in the purchasing power parities and wage ratios with Germany as well as in individual characteristics are accounted for. The timing of return exhibits interesting differences by country of origin. The hazard function over age for Turkish immigrants has a hump-shaped profile that reaches its peak between the ages of 45 and 54. On the other hand, the hazard function of immigrants from EU countries is parabolic. Their hazard rates are higher at early ages and after retirement. Unemployment rates of Turkish immigrants in their fifties are very high. That many choose to return between the ages of 45 and 54 implies that return migration behavior brings about a much less take-up of unemployment benefits.23 Return migration at these ages also increases the net contributions to the pension insurance system for Turkish immigrants as periods of unemployment count toward the pension qualifying period while immigrants make no contributions at these periods.