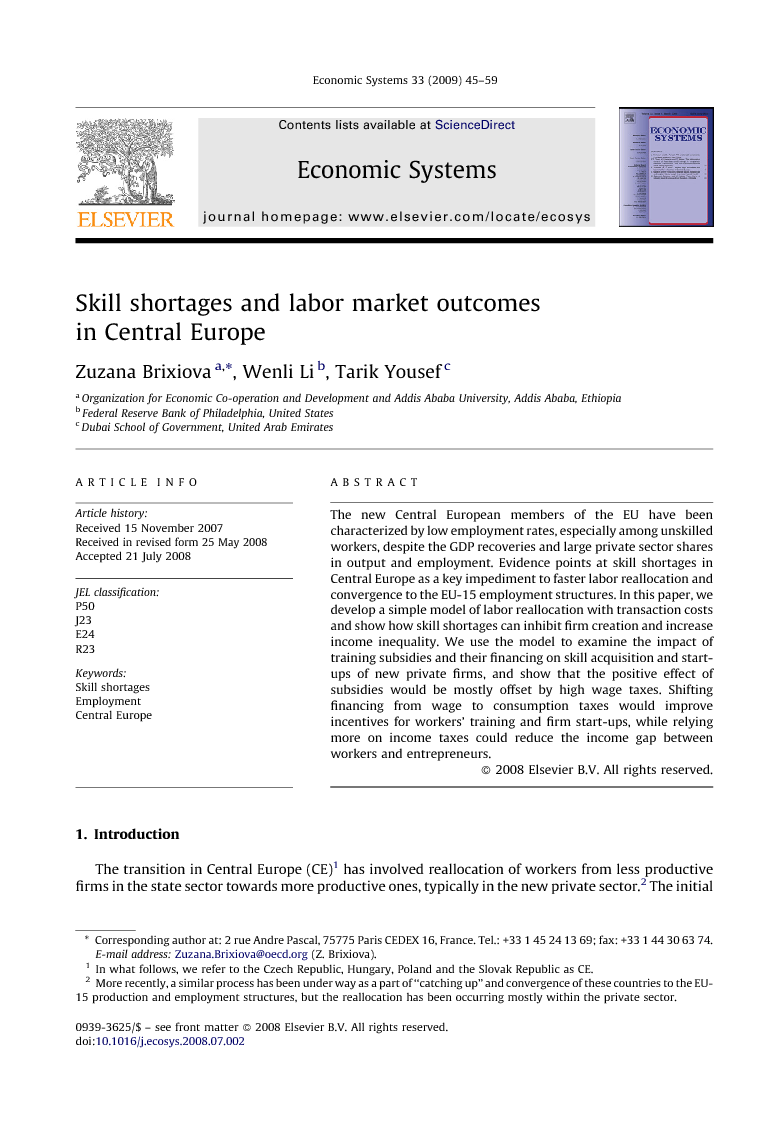 The new Central European members of the EU have been characterized by low employment rates, especially among unskilled workers, despite the GDP recoveries and large private sector shares in output and employment. Evidence points at skill shortages in Central Europe as a key impediment to faster labor reallocation and convergence to the EU-15 employment structures. In this paper, we develop a simple model of labor reallocation with transaction costs and show how skill shortages can inhibit firm creation and increase income inequality. We use the model to examine the impact of training subsidies and their financing on skill acquisition and start-ups of new private firms, and show that the positive effect of subsidies would be mostly offset by high wage taxes. Shifting financing from wage to consumption taxes would improve incentives for workers’ training and firm start-ups, while relying more on income taxes could reduce the income gap between workers and entrepreneurs.

The transition in Central Europe (CE)1 has involved reallocation of workers from less productive firms in the state sector towards more productive ones, typically in the new private sector.2 The initial view was that employment would decline only in the short run, because of the rapid enterprise restructuring and job destruction, but recover over the medium term. However, with the exception of the Czech Republic, employment rates remain low almost two decades later despite the GDP recoveries, large private sector shares in GDP and employment, and EU accession (Fig. 1). Moreover, in all CE countries the low employment rates of unskilled workers are striking and raise political concerns about income distribution and social equity. As a result, researchers and policymakers have turned their attention to the structural factors that affect employment in the new EU members, including the skill composition of the labor force.3 Full-size image (82 K) Fig. 1. Output and labor productivity in Central Europe. Source: OECD, Eurostat, EBRD, IMF. Figure options At the outset of the transition, formal measures of educational attainment were pointing to higher human capital stocks in the CE countries than in countries with comparable income levels. However, already a few years into the transition, evidence of skill shortages has emerged, due to shifts in the composition of employment from jobs with low to higher or different skill content, often from agriculture and industry to jobs in services. As transition progressed, composition of employment has shifted more due to skill upgrading within occupations and industries. In any case, many highly specialized and technical skills decreased in demand, while the need for other skill categories (ICT, high-skilled social services, etc.) was largely unmet. Thus, the initial belief that the transition will be smooth partly because of a skilled labor force has been qualified by observations that skill shortages and mismatch have hindered labor reallocation (Rutkowski and Scarpetta, 2005, Boeri, 2000 and EBRD, 2002). The skill-biased shifts in aggregate demand – due to technological changes and work reorganization – without comprehensive strategies for skill upgrading led to skill shortages combined with very low employment rates among unskilled workers. Of particular interest to us in this paper is the suggestion that skill shortages constrain the emergence and growth of the small and medium size de novo enterprises, which have been the driving force behind output growth and job creation across the transition countries. The new private firms were crucial for job creation in the earlier stages of transition, when they accounted for between 40 and 70 percent of new jobs (Konings et al., 1996, Bilsen and Konings, 1998 and Jurajda and Terrell, 2003). Even though the contributions of these enterprises to employment creation decreased with the progress of transition (Rutkowski and Scarpetta, 2005), they continue to be fundamental for job creation in Central Europe (Lopez-Garcia, 2006) as well as in more developed OECD countries.4 Although widely cited in various surveys and studies, the link between skill shortages and firm creation has not been examined in the applied theoretical literature on CE and transition economies in general. The existing research of the constraints on the growth of the private sector has largely focused on the availability of capital, progress with privatization, and the regulatory environment, but effects of skill shortages have been understudied.5 Modifying models of Snower (1996) and Brixiova et al. (1999), we develop a simple model of labor reallocation with transaction costs and show how skill shortages have constrained the emergence of de novo private enterprises in the CE countries. If, as in the EU-15 countries, the new firms are to make significant contributions to output and employment growth, they need to be supported by appropriate policies. We therefore evaluate the impact of retraining subsidies and their financing on firm start-ups, employment, output, and income distribution. We demonstrate the limitations of retraining subsidies when financed by taxes on wages, especially since these taxes are already high in the CE countries. 6 Instead, we show that shifting the financing of the retraining programs to consumption or income taxes would create positive incentives for skill acquisition by workers as well as for firm start-ups and employment. We also highlight the efficiency–equity trade-offs of these alternative schemes of subsidy financing. 7 The paper is organized as follows: Section 2 highlights key facts; Section 3 develops the model; Section 4 analyzes government interventions; Section 5 presents illustrative simulations, and Section 6 concludes.

On the eve of restructuring, the CE countries were considered as highly endowed with human capital, and educational reforms and retraining programs were not viewed as a policy priority. However, subsequent country and industry surveys as well as persistently low employment rates, especially among unskilled workers, have pointed to the existence of human capital bottlenecks. In response to these skill shortages, the Central European countries formulated active labor market policies, designed to subsidize skill acquisition. Nevertheless, the share of public expenditures on these programs has been low, especially in comparison to the EU-15 countries. The reallocation of labor towards more productive jobs in these countries continues to be hampered by skill shortages. This paper presented an analytical framework linking skill shortages with firm creation, which is consistent with several stylized facts on the structure of employment and earnings in CE, including lower participation of unskilled than skilled workers in retraining programs and their lower employment rates. The paper then examined the potential role of government subsidies for retraining programs. It highlighted the disincentives resulting from high taxes on wages that characterize the CE countries, and showed that (a) a consumption tax is preferable from the efficiency view point but would worsen income distribution, and (b) an income tax would provide better incentives than the wage tax, while having a less negative impact on income inequality than the consumption tax. This paper has not accounted for the wide range of labor market experiences across other transition countries. As such, an important extension of this research would be to examine these issues for the Baltic and CIS countries, with a focus on improving the employment prospects for unskilled workers.