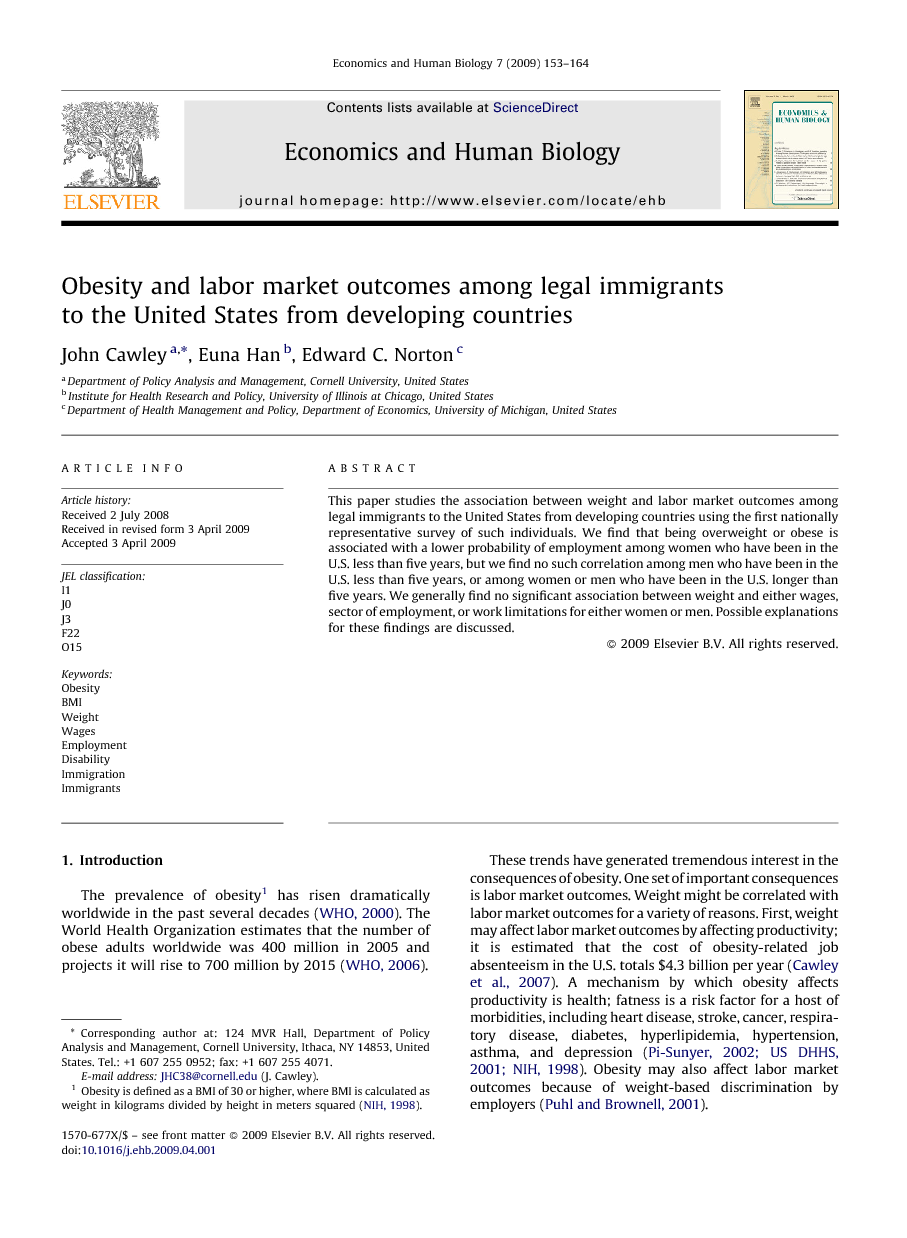 The prevalence of obesity1 has risen dramatically worldwide in the past several decades (WHO, 2000). The World Health Organization estimates that the number of obese adults worldwide was 400 million in 2005 and projects it will rise to 700 million by 2015 (WHO, 2006). These trends have generated tremendous interest in the consequences of obesity. One set of important consequences is labor market outcomes. Weight might be correlated with labor market outcomes for a variety of reasons. First, weight may affect labor market outcomes by affecting productivity; it is estimated that the cost of obesity-related job absenteeism in the U.S. totals $4.3 billion per year (Cawley et al., 2007). A mechanism by which obesity affects productivity is health; fatness is a risk factor for a host of morbidities, including heart disease, stroke, cancer, respiratory disease, diabetes, hyperlipidemia, hypertension, asthma, and depression (Pi-Sunyer, 2002, US DHHS, 2001 and NIH, 1998). Obesity may also affect labor market outcomes because of weight-based discrimination by employers (Puhl and Brownell, 2001). In addition to weight affecting labor market outcomes, labor market outcomes may affect weight. In particular, income2 (e.g., through diet) and on-the-job exertions3 may affect weight. Finally, both weight and labor market outcomes may be correlated with unobserved factors such as rate of time preference.4 Research on the correlation between weight and labor market outcomes most frequently examines wages or earnings; e.g., Averett and Korenman (1996), Cawley (2004), and Han et al. (2009).5 There is a dramatic difference between developed countries and developing countries in the sign of the correlation between weight and wages or earnings—it tends to be negative in developed countries and positive in developing countries. For example, a higher weight-for-height is associated with higher wages in India (Deolalikar, 1988, Behrman and Deolalikar, 1989 and Dinda et al., 2006), the Philippines (Haddad and Bouis, 1991), Brazil (Thomas and Strauss, 1997), Guinea (Glick and Sahn, 1998) and the Ivory Coast and Ghana (Schultz, 2003). In contrast, higher weight-for-height in the U.S. is generally associated with lower wages for women with inconsistent results for men (Averett and Korenman, 1996, Cawley, 2004 and Baum and Ford, 2004). One must be cautious in making this comparison because the data for many of the developing countries is older – from the 1970s to 1980s – and the relationship between weight and wages may have changed in developing countries since then. Still, these estimates for developing countries remain the most recent available. It is unknown why the patterns are so different for the two groups of countries, but there are several possible explanations. One possibility is that jobs are more strenuous in developing countries (for example, more workers are engaged in agricultural labor), and therefore higher body mass enhances productivity (Glick and Sahn, 1998). Alternatively, employers in the two types of economies may interpret the signal of obesity differently because the type of unobserved heterogeneity that employers care about differs in the two types of countries: employers in developing countries may be concerned about hiring malnourished (and therefore less productive) workers, whereas employers in developed countries may be concerned with avoiding workers who are myopic or will have higher health-care costs (Philipson, 2001). Smaller literatures study the relationship between weight and other, non-wage, labor market outcomes. For example, research has found that obesity is associated with a lower probability of employment (e.g., Paraponaris et al., 2005, Cawley and Danziger, 2005 and Morris, 2007)6 although this may not be causal (Norton and Han, 2008). Obesity is also associated with a higher probability of disability (e.g., Sturm et al., 2004 and Lakdawalla et al., 2004),7 although this too may not be causal (Cawley, 2000b). A smaller literature examines the relationship between obesity and sector of employment (e.g., Pagan and Davila, 1997 and Cawley, 2000a).8 These literatures are almost exclusively based on samples from developed countries, so comparisons with developing countries are not possible. The contribution of this paper is to study the association between weight and labor market outcomes among an interesting group that has not before been studied in this context: recent immigrants to the United States from developing countries.9 Because these individuals were born in developing countries but now live in the United States it is unclear whether any correlation between their weight and their labor market outcomes would resemble the pattern typically found in either developing countries or that typically found in the U.S. Thus, this paper relates to both the literatures for the U.S. and developing countries. To clarify, our goal is to estimate the association of weight with labor market outcomes among recent legal immigrants to the U.S. In contrast, it is not our goal to predict how the association of weight with wages among the immigrants would have differed if they had remained in their home countries; we do not observe them in their home countries, and their weight may have changed since they arrived in the U.S. (Kaushal, 2009). Moreover, immigrants typically differ from stayers in motivations, skills, and ambition, and are thus a select sample of those born in the country of origin (Borjas, 1999). However, the labor market outcomes of immigrants, and their correlates, are of interest in and of themselves (e.g., Borjas, 1999).