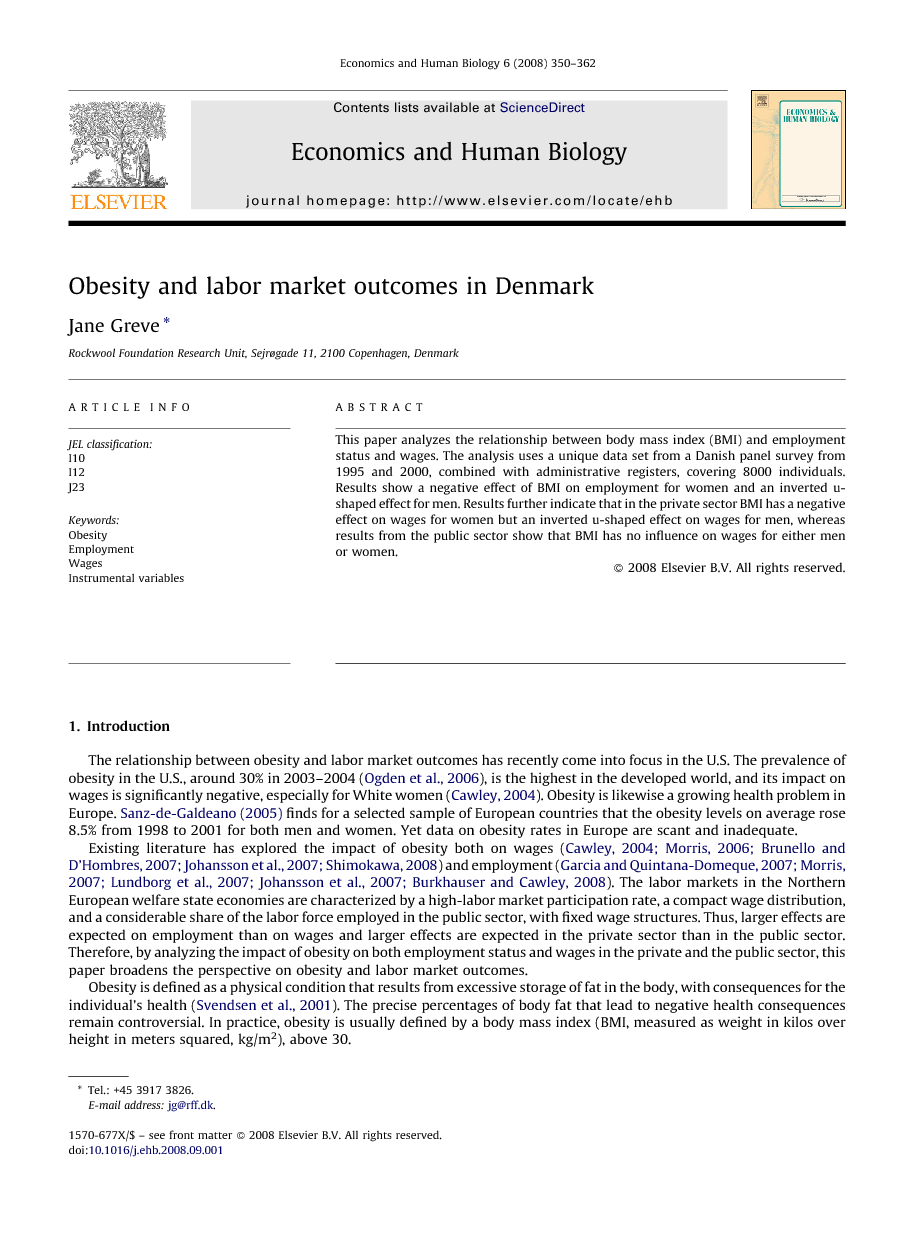 This paper analyzes the relationship between body mass index (BMI) and employment status and wages. The analysis uses a unique data set from a Danish panel survey from 1995 and 2000, combined with administrative registers, covering 8000 individuals. Results show a negative effect of BMI on employment for women and an inverted u-shaped effect for men. Results further indicate that in the private sector BMI has a negative effect on wages for women but an inverted u-shaped effect on wages for men, whereas results from the public sector show that BMI has no influence on wages for either men or women.

The relationship between obesity and labor market outcomes has recently come into focus in the U.S. The prevalence of obesity in the U.S., around 30% in 2003–2004 (Ogden et al., 2006), is the highest in the developed world, and its impact on wages is significantly negative, especially for White women (Cawley, 2004). Obesity is likewise a growing health problem in Europe. Sanz-de-Galdeano (2005) finds for a selected sample of European countries that the obesity levels on average rose 8.5% from 1998 to 2001 for both men and women. Yet data on obesity rates in Europe are scant and inadequate. Existing literature has explored the impact of obesity both on wages (Cawley, 2004, Morris, 2006, Brunello and D’Hombres, 2007, Johansson et al., 2007 and Shimokawa, 2008) and employment (Garcia and Quintana-Domeque, 2007, Morris, 2007, Lundborg et al., 2007, Johansson et al., 2007 and Burkhauser and Cawley, 2008). The labor markets in the Northern European welfare state economies are characterized by a high-labor market participation rate, a compact wage distribution, and a considerable share of the labor force employed in the public sector, with fixed wage structures. Thus, larger effects are expected on employment than on wages and larger effects are expected in the private sector than in the public sector. Therefore, by analyzing the impact of obesity on both employment status and wages in the private and the public sector, this paper broadens the perspective on obesity and labor market outcomes. Obesity is defined as a physical condition that results from excessive storage of fat in the body, with consequences for the individual's health (Svendsen et al., 2001). The precise percentages of body fat that lead to negative health consequences remain controversial. In practice, obesity is usually defined by a body mass index (BMI, measured as weight in kilos over height in meters squared, kg/m2), above 30. Obesity affects labor market outcomes through several channels. Obesity is related to a number of serious diseases such as hypertension, Type 2 diabetes, coronary heart disease, and sleep apnea.1 Obesity may also lead to psychological problems arising from stigmatization, social rejection, humiliation, and dissatisfaction with oneself, particularly among women.2 This stigmatization may also depend on the prevalence of obesity, so that obesity becomes more stigmatizing in countries like Denmark, where the prevalence of obesity is less than half of the U.S. level. Problems at the personal level may also affect the individual's relationship to the labor market. Obesity may be a real parameter of productivity, e.g., in occupations with physical labor or customer contact. Obesity may also reduce work ability through the health channel, thereby reducing the individual's productivity. Although results from the Burkhauser and Cawley study (2004) are mixed, they nonetheless present evidence that weight increases the probability of health-related work limitations and the probability of receiving disability-related benefit payments. While obesity is related to several diseases not all obese people are sick and have more sick days than healthy weight people. In the case of statistical discrimination of obese people, obesity, as generally related to several health problems that do imply costs for the employer, becomes a motive for employers not to employ the obese in order to maximize profit. Discrimination against obese people in the labor market can be a consequence of prejudice or preferences (for non-obese workers) on the part of employers, employees, or customers (Becker, 1973). Determining when differences in employment are due to discrimination is not easy as they are often justified as productivity differences or additional costs associated with employing a specific individual. A recent experimental study from Sweden (Rooth, 2007) finds evidence of discrimination against obese people in the hiring process and finds that employers in occupations with more customer contact discriminate more than those with less customer contact. The sociological literature supports the hypothesis that obese people meet discrimination in the labor market. Research into the hiring process shows that some of the most important values an employer looks for are non-measurable characteristics such as engagement, commitment, and social qualifications (Csonka, 1995 and Behrenz and Delander, 1996). These values may work against obese people in the hiring process as obesity may be a signal of certain qualities such as lack of self-control and laziness (Sobal and Stunkard, 1989 and Puhl and Latner, 2007) which employers may not like. However, discrimination for esthetical reasons accompanies rational choice by the employer as obesity is also a signalling device. This paper offers a new approach to the subject of obesity and labor market outcomes using Danish data. The paper presents estimates of the impact of body weight on both employment and wages for both men and women using body weight measures all based on BMI or BMI corrected for measurement error through use of a Danish medical study's predictions on the relationship between the reported and true BMI (Bendixen et al., 2004). The paper uses a unique dataset consisting of information from both a Danish panel survey from 1995 and 2000 and the administrative registers. This dataset on about 8000 individuals includes a long list of variables recording employment, employment history, body weight, and medical prescription records which allows us to deal with methodological problems – such as measurement error, endogeneity, and selection – that arise in studies of the relationship between obesity and labor market outcomes.

The results indicate different effects of BMI on both employment and wages (in the private sector) for men and women. The effect of BMI on employment takes on a significant inverted u-shaped relationship for men and a significant negative linear relationship for women. On average, obese women are 8.5% less likely to be employed than healthy weight. Obese men are 2.8% less likely to be employed than healthy weight. The different results on employment probabilities for men and women are to some extent explained by the use of BMI as a body weight measure. Recent studies on the correlation between employment and obesity using more accurate measures for body fat such as total body fat (TBF) show that also among men increasing TBF is negatively associated with employment (Johansson et al., 2007 and Burkhauser and Cawley, 2008). The divergence between the results in this paper and the previous studies using TBF could be due to the fact that BMI does not distinguish between fat and fat free mass such as muscles and bones. The inverted u-shaped relationship between BMI and employment for men may be because “overweight” men may be muscular with little body fat. We do not see the same effect among women, mainly because there is less variation in muscle mass for women.17 The positive effects of being overweight among men in Denmark can also be explained by the data period (year 2000). In 2000 obesity and its related negative consequences as a general issue (and not only in women's magazines where low-body weight as a beauty ideal has been in focus for a much longer time) was a much less debated issue compared to the public debate and awareness today. Being overweight might therefore have been less associated with negative characteristics such as sickness and being lazy in 2000 compared to how it is today. Overweight among men might even have been a signal of power or strength in 2000. More recent data from Denmark might show that the positive effect of being overweight among men has diminished. This paper also analyzes the relationship between BMI and wages divided into the private and public sector. The results from the private sector on the relationship between BMI and wages show an inverted u-shaped form for men. Among women the effect on higher body weight is −0.002 implying that an increase in weight of two standard deviations (22 kg) is associated with a decrease in annual wages of 4.4%. Contrary to the relationship between BMI and wages in the private sector, the impact of BMI on wages is not statistically significant in the public sector. A number of hypotheses of the impact of body weight on employment and wages, i.e., differences in productivity or labor supply, taste-based discrimination, and statistical discrimination were described in Section 1. Determining when differences in labor market status are due to discrimination is not easy as they are often justified as productivity differences or additional costs associated with employing a specific individual. However, a considerably large part of the relevant literature finds that the negative relationship between increasing body weight and labor market outcomes results from discrimination. Splitting the sample into the private and public sectors reveals some interesting aspects of the relationship between body weight and labor market outcomes, as the wage setting in the public sector, compared to the private sector, is fairly fixed. In the regressions of wages on body weight in the private sector, where industry is included as a control variable, women get lower wages when body weight increases. The results for men show that wages rise until BMI reaches 28, and then fall. A recent study by Wada and Tekin (2007) supports the different effects of BMI on wages for men and women found in the private sector in this study. However, when Wada and Tekin (2007) use a predicted measure of body fat (BF) increased BF is negatively related to wages for both men and women. However, as only approximately half of their observations in the data set have the accurate information on BF it is still not clear how the selected group on which the predicted equation is made influences their results. This fact indeed reflects the problem that more accurate body weight measures are both difficult and expensive to collect and that they therefore also are exposed to a number of uncertainties as is the case for the BMI. However, the relationship between BMI and wages among men should be interpreted carefully as BMI might misclassify muscular men as overweight. From an economic point of view, both individual and statistical discrimination implies some inefficiency cost for society. Still, intervening in this field, to correct the market failure resulting from discriminatory preferences or lack of information and to reduce discrimination, is difficult. Adopting restrictive political measures could lead to a number of drawbacks. Obesity and the physiological appearance of obese people may indeed – with or without our general consent – be a real parameter of productivity, e.g., in occupations with physical labor or customer contact. Although not all obese individuals have health problems the relationship between obesity and illness has been validated by a large number of medical studies (National Institutes of Health, 1998). The level of general information on the relationship between obesity and health might appear to correlate with the degree of discrimination, and this correlation increases as obesity and costs of obesity-related diseases continue to grow throughout the world.