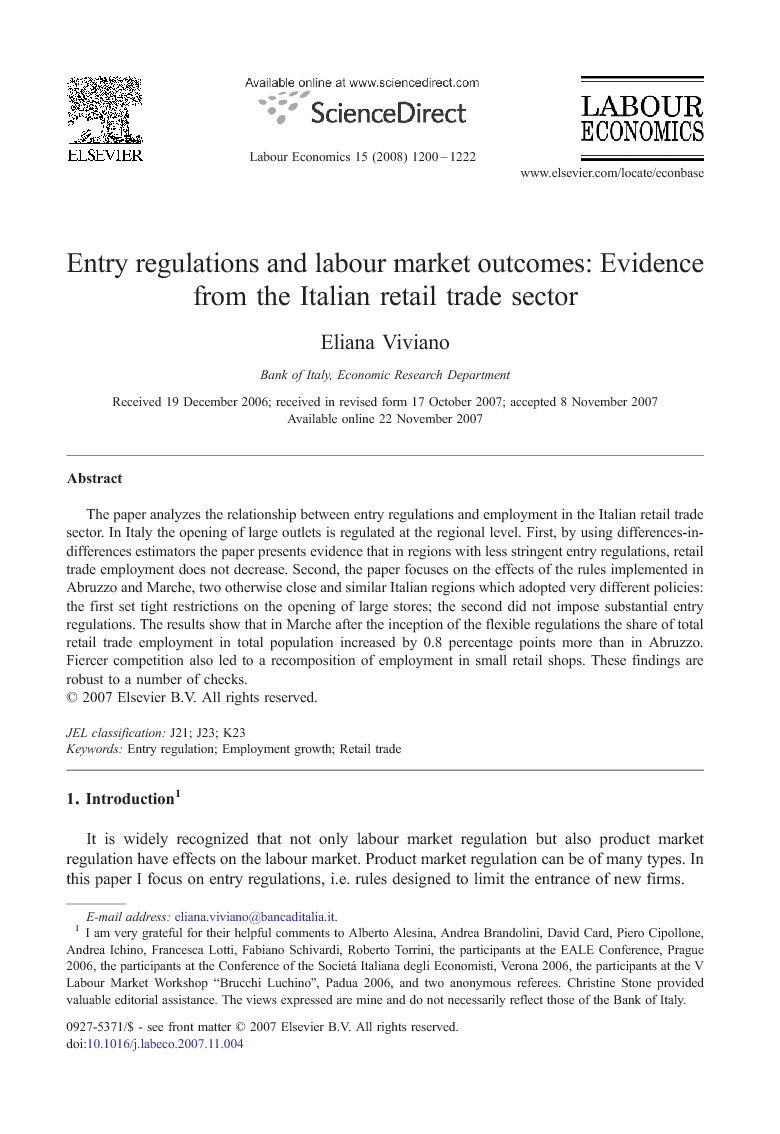 The paper analyzes the relationship between entry regulations and employment in the Italian retail trade sector. In Italy the opening of large outlets is regulated at the regional level. First, by using differences-in-differences estimators the paper presents evidence that in regions with less stringent entry regulations, retail trade employment does not decrease. Second, the paper focuses on the effects of the rules implemented in Abruzzo and Marche, two otherwise close and similar Italian regions which adopted very different policies: the first set tight restrictions on the opening of large stores; the second did not impose substantial entry regulations. The results show that in Marche after the inception of the flexible regulations the share of total retail trade employment in total population increased by 0.8 percentage points more than in Abruzzo. Fiercer competition also led to a recomposition of employment in small retail shops. These findings are robust to a number of checks.

The paper presents empirical evidence in favour of the hypothesis that not only labour market rigidities but also product market regulation affect labour market outcomes. The case studied is a reform introduced in Italy in 1998, called the “decreto Bersani”. Since this law empowered regional authorities in Italy to regulate large store openings, entry regulations now vary considerably across regions. This regional variation can be used to identify the effects of entry rules on the labour market. The empirical results, based on two different samples, confirm that in Italy, as in other countries, lowering entry barriers leads to higher employment. I compare retail trade employment growth in Marche and Abruzzo, two regions in which the retail trade sector was very similar before the introduction of the Bersani law, but which adopted different regulations after the Bersani law. The results show that in Marche after the inception of the flexible regulations the share of total retail trade employment in total population increased by 0.8 percentage points more than in Abruzzo. Thus, restrictive regulations, often justified by politicians as a way of protecting employment, may instead achieve the opposite effect. The positive effect on employment is caused by two factors. First, less stringent entry rules reduce start-up costs for large stores. In Marche, from 2000 to 2002, the floor space of large establishments increased by 97 per cent more than in Abruzzo. As a consequence, in liberalized areas the growth of employment in large stores accounted for most of the total employment growth. Second, large stores do not necessarily compete with small retail shops, since the number of workers in small retail establishments does not significantly diminish after liberalization. Greater competition, even if it has negative effects on traditional family-owned shops, by reducing their share in the population by around − 0.5 percentage points, may encourage the development of new types of small shops, with an increase in the share of small shop salaried workers (from 0.3 to 0.9 percentage points) and consequences for the composition of employment in small shops. The estimates presented in this paper refer to medium-term dynamics, as they cover only a three-year time period after the reform. In principle, I cannot exclude that in the long run the (relatively) free entry of large stores in Marche might force small shops to leave the market, producing a negative impact on small retail trade employment. However, the retail trade sector, and especially traditional small shops, typically have higher than average mortality rates. For example, in Italy in 2000 the mortality rate of small shops (equal to the ratio between small shops leaving the market and total small shops in operation) was equal to 7.9 percent, higher than the average mortality rate, which is equal to 6.5 percent. Thus, it is not implausible to look at the effects of large store openings just 2–3 years after liberalization. Moreover, the evidence presented in this paper suggests that some adjustment in small shop employment did actually take place during this short time horizon. Finally, it must be stressed that a complete evaluation of the welfare effects of entry regulation should not be limited to the labour market, but should also take account of other related questions, such as prices, the relationship between free entry and firms’ profit margins, consumer prices and, ultimately, aggregate consumption. All these issues, which can be analyzed only by the use of plant-level data, call for further empirical investigation.