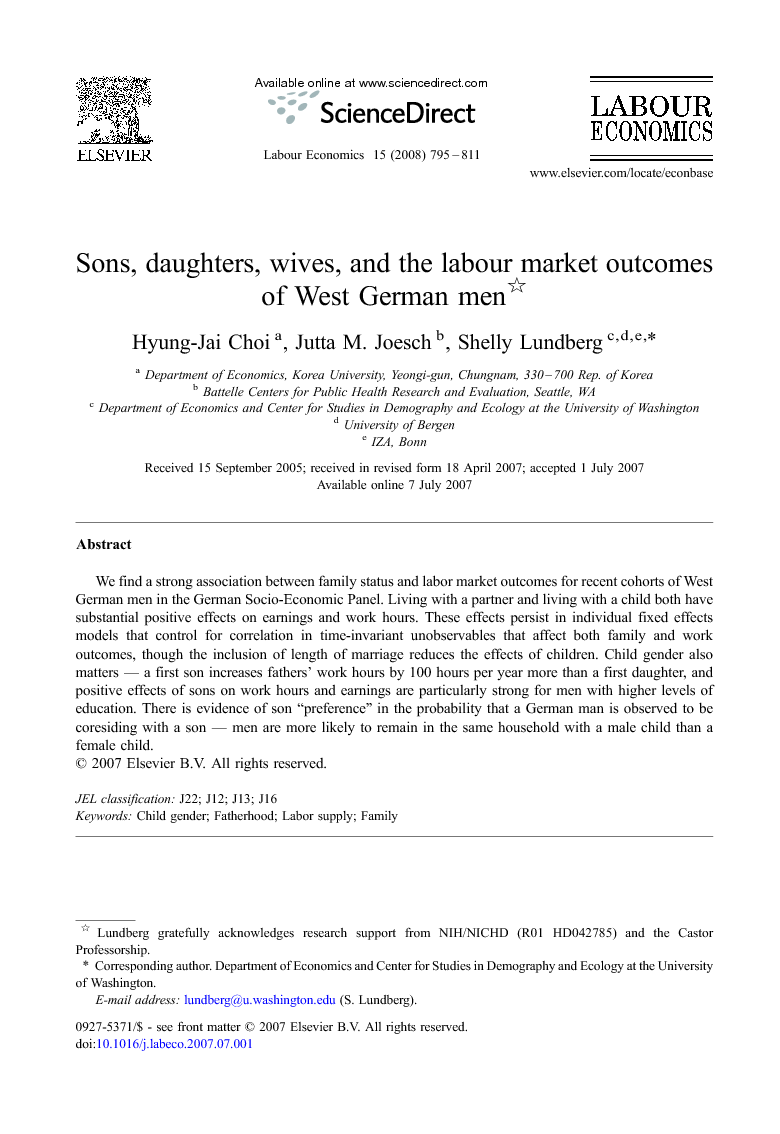 We find a strong association between family status and labor market outcomes for recent cohorts of West German men in the German Socio-Economic Panel. Living with a partner and living with a child both have substantial positive effects on earnings and work hours. These effects persist in individual fixed effects models that control for correlation in time-invariant unobservables that affect both family and work outcomes, though the inclusion of length of marriage reduces the effects of children. Child gender also matters — a first son increases fathers' work hours by 100 hours per year more than a first daughter, and positive effects of sons on work hours and earnings are particularly strong for men with higher levels of education. There is evidence of son “preference” in the probability that a German man is observed to be coresiding with a son — men are more likely to remain in the same household with a male child than a female child.

Interactions between a woman's employment and earnings and her marital status and parenthood have been a central theme in economic analyses of female labor market outcomes. The interdependence of work and family decisions for men have received less attention, but this is changing as fertility rates fall, marriages occur later in life and end more frequently, and gender roles become more equal in developed countries. As men's family status becomes more variable and more transitory, the co-determination of partnership and parenting with employment and earnings becomes a more interesting empirical issue (Lundberg, 2005a). A longstanding literature on the “marriage premium” in men's wages has explored one dimension of this simultaneity, but only a few studies examine the effects of family status on men's labor supply.1 In this paper we use longitudinal data to estimate the relationship between the work hours and earnings of recent cohorts of West German men and their family situation—whether they are living with a partner, how many children they have, and whether they have sons or daughters. We find substantial positive “marriage premia” in work hours and earnings, as well as evidence that fathers of sons, particularly well-educated fathers, increase their work hours more than do fathers of daughters. Since the 1970s, the former West Germany has experienced demographic changes and changes in the economic roles of men and women that are similar to those in most of the developed world — declining fertility, delayed marriage, and increases in women's employment. While employment, and particularly full-time employment, of German mothers with young children has lagged behind that in many other countries, the overall employment rates of women have been rising (Bundeszentrale für Politische Bildung, 2004a). For men, the average age at first marriage has increased from 25.3 years in the mid 1970s to 32 years in 2003 (Statistisches Bundesamt Deutschland, 2005a and Statistisches Bundesamt Deutschland, 2001), and the average number of births per woman aged 15 to 45 has decreased from 2.2 in 1970 to 1.4 in 2000 (Bundeszentrale für Politische Bildung, 2004b). These trends indicate a substantial change in the lifetime family responsibilities of young German men—more of their “prime-age” years will be spent without a spouse or dependent child, and many of them will share the income-earning role with their partner. Is the labor market behavior of West German men affected by their family status? We use longitudinal data from the German Socio-Economic Panel Study to estimate individual fixed effects models of earnings and annual work hours for men. We find that living with a partner is associated with substantially higher earnings and work hours for male household heads born in 1950 or later, as is the presence of children in a man's household. A comparison of models with and without fixed effects suggests positive selection of men into marriage. Although our estimates control for correlations between time-invariant unobservables that may affect family status and employment, we cannot rule out reverse causality because a man's co-residence decisions may be affected by shocks to his labor market prospects. Child gender at birth, however, may reasonably be considered to be exogenous with respect to labor market outcomes, and a number of recent studies have found that sons and daughters have different effects on parental behavior in the U.S. (Lundberg, 2005b). When we distinguish between the effects of sons and daughters on a man's earnings and work hours, two interesting results emerge. First, a first son appears to have a significantly more positive effect on the father's work hours than does a first daughter. This finding is consistent with the results of Lundberg and Rose (2002), who found positive effects of sons on the labor supply of American men. Like Lang (2005), we do not find significantly different effects of sons and daughters on men's earnings in the full sample, but in a subsample of men with more than 11 years of education, sons increase both the hours worked and earnings of their fathers. Second, the presence of boys versus girls in a man's household is endogenous with respect to his labor supply behavior. Girls are significantly more likely to “disappear” from the man's household, and when we replace indicators of co-resident boys and girls with variables that reflect children ever reported to have been in the man's household (thus reducing the effects of paternal self-selection), the positive relative effect of boys on men's labor supply is increased.

The earnings and work hours of West German men born in 1950 or later have a strong positive association with coresidence with a partner and children. Using fixed effects to control for the fact that hard-working and productive men are more likely to marry and have children, we find that marriage and children continue to have substantial positive effects, though they are reduced in magnitude. Marriage increases a man's work hours by about 100 hours per year and his earnings (unconditional on employment) by more than 30 percent. A child in his household increases a man's work hours by 56 hours per year and his earnings by 12 percent. Including marriage length in the fixed effect specifications substantially reduces the effect of children on work hours. We also find that child gender matters, at least for work hours. After controlling for selection, we find that only male children have positive significant effects. The difference between the effects of a first son and first daughter on fathers' work hours is a highly significant 100 hours per year. The positive effects of sons on work hours and earnings are particularly strong for men with higher levels of education. We also find evidence of son “preference” in the probability that a German man is observed to be coresiding with a son or a daughter. Female children are underrepresented in the raw data, and a Cox proportional hazards model of a child's “disappearance” from a man's household shows that men are substantially more likely to remain in the same household with a male than a female child. A comparison of labor supply models that base child measures on either children currently in a man's household or children ever in a man's household indicates that men who remain with female children are strongly positively self-selected (in terms of their work hours) relative to men who remain with male children.