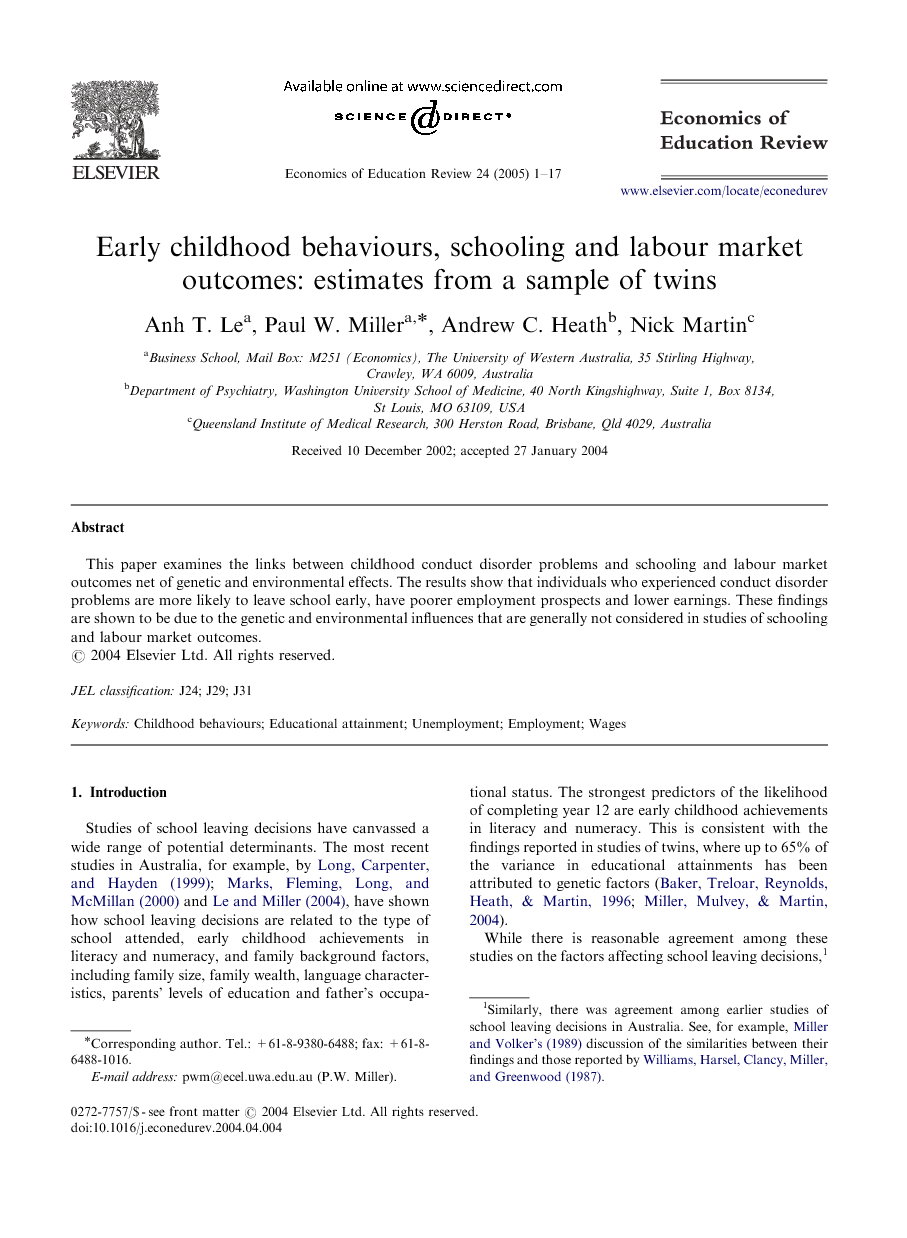 This paper examines the links between childhood conduct disorder problems and schooling and labour market outcomes net of genetic and environmental effects. The results show that individuals who experienced conduct disorder problems are more likely to leave school early, have poorer employment prospects and lower earnings. These findings are shown to be due to the genetic and environmental influences that are generally not considered in studies of schooling and labour market outcomes.

Studies of school leaving decisions have canvassed a wide range of potential determinants. The most recent studies in Australia, for example, by Long, Carpenter, and Hayden (1999); Marks, Fleming, Long, and McMillan (2000) and Le and Miller (2004), have shown how school leaving decisions are related to the type of school attended, early childhood achievements in literacy and numeracy, and family background factors, including family size, family wealth, language characteristics, parents’ levels of education and father’s occupational status. The strongest predictors of the likelihood of completing year 12 are early childhood achievements in literacy and numeracy. This is consistent with the findings reported in studies of twins, where up to 65% of the variance in educational attainments has been attributed to genetic factors (Baker, Treloar, Reynolds, Heath, & Martin, 1996; Miller, Mulvey, & Martin, 2004). While there is reasonable agreement among these studies on the factors affecting school leaving decisions,1 the understanding of these decisions is still far from complete. At a time when there is considerable emphasis on education in the knowledge economy, around one quarter of teenagers in Australia do not complete high school. Why does this sizeable group of teenagers depart from the norm on such an important decision that will help shape their future? Examination of school completion rates for given levels of ability, or among low socio-economic status groups, reveals considerable variation. This is consistent with the relatively low degrees of explanation of the models of school leaving decisions discussed above. Other factors are presumably at work? One such set of factors may be childhood behaviours. Among these are truancy, bullying and deviant behaviour. These behaviours are identifiable, measurable, and, according to the limited literature available, likely to have significant adverse consequences on school leaving decisions. Moreover, it is possible that these behaviours also impact on the patterns of success and failure in the labour market in the post-school period. This might occur where the behaviours persist (for example, where aggression at school carried over to aggression in the workplace) or where the childhood events are associated with a permanent scar to the individual’s employment record in the same way that teenage unemployment has been argued to permanently disadvantage people when older (e.g., Australian Institute of Multicultural Affairs, 1985).2 This paper presents evidence on the links between childhood behaviours and school leaving decisions and labour market outcomes in Australia. It shows that adverse childhood behaviours are linked to early school leaving as well as to poor labour market outcomes. Particular childhood behaviours that are associated with the decision to leave school early are identified and ranked in importance. The extent to which the links between childhood behaviours and school learning decisions and labour market outcomes are in fact attributable to ability and family background factors is assessed using information on twins. The structure of the paper is as follows. Section 2 reviews the literature that has attempted to quantify the links between childhood behaviours and schooling and labour market outcomes. The data set used in the empirical work is introduced in Section 3, while the statistical analyses are presented in 4 and 5. Section 6 contains a summary and conclusion.

This study examines the links between childhood ‘conduct disorder’ problems and schooling and labour market outcomes. It shows that these types of problems can adversely affect an individual’s schooling outcome as well as their performance in the labour market. These results are consistent with the limited evidence in the area. In relation to the schooling outcomes, individuals who had a large number of ‘conduct disorder’ problems are more likely to leave school before completing years 11 or 12. However, certain conduct disorder problems are more detrimental to schooling outcomes than others. More specifically, stealing with confrontation, running away from home over night, bullying and starting physical fights are the behavioural problems that have the largest negative impacts on the school leaving decisions of males and females. Within-twins analyses of samples of identical twins suggest that genetic factors are the dominant factors which drive the positive association between ‘conduct disorder’ and early school leaving for both males and females. These results suggest that any policies which aim to encourage individuals to stay on at school must focus not only on the behaviours of the individuals but also on their socioeconomic background. Individuals who experienced childhood ‘conduct disorder’ problems are disadvantaged in the labour market compared to those who do not exhibit these characteristics. For example, males and females who experienced ‘conduct disorder’ problems are less likely to be employed. The impact of childhood ‘conduct disorder’ problems on the probability of being employed is of the same order of magnitude as that of educational attainment. Within-twins analyses of samples of identical twins suggest that genetic and environmental factors are the forces which drive the negative relationship between ‘conduct disorder’ and employment. The potential shortcomings of within-twins analysis identified in recent studies, particularly those associated with measurement error and individual components of ability that are not controlled for when using identical twins, are important caveats on these results. From the social perspective, it will also be useful to expand the set of outcomes considered in this paper. For example, conduct disorder problems may be associated with early involvement with alcohol and drugs. This involvement may be an intermediary that leads to other outcomes, such as early school leaving and poor labour market outcomes. If these links can be quantified then it would widen the scope of the policy measures that might be used to address early school leaving behaviour.