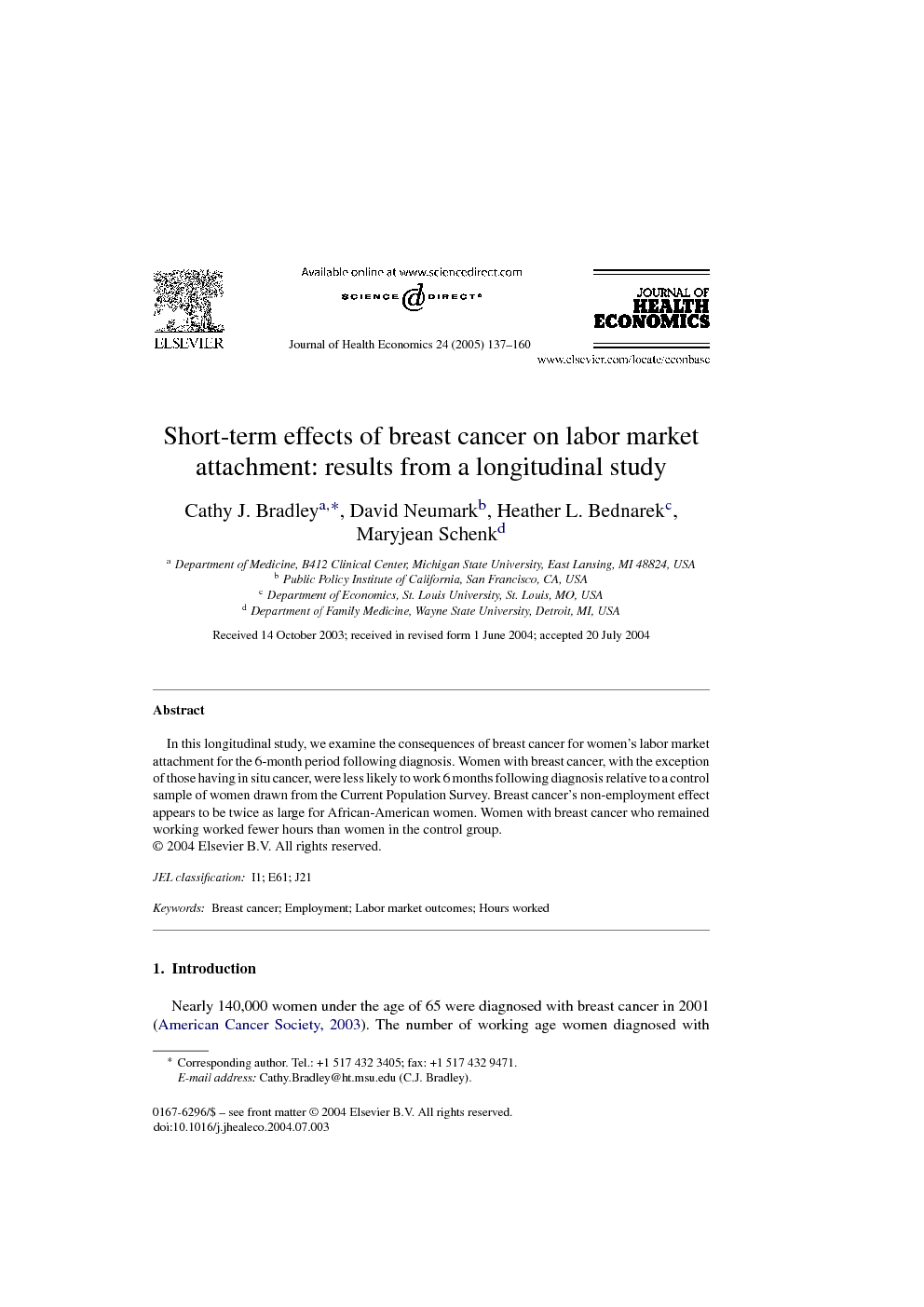 In this longitudinal study, we examine the consequences of breast cancer for women's labor market attachment for the 6-month period following diagnosis. Women with breast cancer, with the exception of those having in situ cancer, were less likely to work 6 months following diagnosis relative to a control sample of women drawn from the Current Population Survey. Breast cancer's non-employment effect appears to be twice as large for African-American women. Women with breast cancer who remained working worked fewer hours than women in the control group.

Nearly 140,000 women under the age of 65 were diagnosed with breast cancer in 2001 (American Cancer Society, 2003). The number of working age women diagnosed with breast cancer is not likely to diminish in the future as screening is recommended annually for women age 40 and over, and as screening technology improves, tumors of smaller size that would have gone unnoticed will be detected and treated. In addition, treatment for breast cancer has become considerably more aggressive, even for early stage tumors (Fisher et al., 2001). Due to these changes in detection and treatment, women are likely to bear the consequences of breast cancer during their working years when they may have otherwise lived and functioned for some time without knowledge or effects of their disease. In this paper, we study the consequences of breast cancer for women's labor market attachment for the 6-month period following diagnosis. In a review of studies addressing cancer survivors’ abilities to return to work, Spelten et al. (2002) concluded that there is a lack of systematic research regarding the return to work for cancer patients and that future studies need to adopt a longitudinal and prospective design. As the United States’ health priorities focus on early detection and turning once life-threatening conditions into chronic conditions, a better understanding of labor market outcomes in a chronically ill population is critical. Our study answers this call for research. By using a longitudinal dataset collected for the purposes of studying labor market outcomes of women newly diagnosed with breast cancer, we examine the immediate post-treatment changes in labor supply among women, most of whom were working prior to their breast cancer diagnosis, relative to a control group of women. Breast cancer's short-term labor market outcomes are not well understood, but are important since screening guidelines for working age women are in place, and if cancer is detected and treated in working women, then return to work is an objective indicator of recovery from treatment. The National Comprehensive Cancer Network (NCCN)1 treatment guidelines for breast cancer recommend a combination of surgery, radiotherapy, and chemotherapy depending on cancer stage, histology, and other clinical factors. These aggressive treatment regimens are believed to reduce the chances of recurrence and thus prolong survival (Fisher et al., 2001), but can also cause impairments such as loss of range of motion in the arm on the affected side, lymphadema, reduced concentration and cognition, pain, and fatigue (Ahles et al., 2002, Lippman and Hayes, 2001 and Olin, 2001). It is estimated that as many as 80% of women who undergo breast conserving surgery, axillary dissection, and breast radiation experience arm and psychological distress (Maunsell et al., 1993 and Yap et al., 2002). Women, physicians, and employers need to be informed about possible periods of non-employment that may have long-term consequences such as limiting one's ability to return to the labor force, obtaining or retaining health insurance, and reducing earnings. An examination of breast cancer's short-term effects on labor supply is largely absent from the literature. This paper is organized as follows: first, we review breast cancer survivorship in the context of labor supply; second, we describe the cancer and control samples for this investigation; third, we present methods for the empirical analysis; fourth, we show our results; and finally, we discuss our findings and identify areas for future research.

The results show a substantial negative impact of breast cancer on labor supply 6 months following diagnosis. Women with breast cancer were about 17 percentage points less likely to be employed 6 months following diagnosis relative to women in the CPS control group at MIS 5. The effects were stronger for those with more advanced stage cancers, while there was no employment effect on women with in situ cancers. Among women employed prior to diagnosis, at least 12% appeared to move out of the labor force altogether by retiring or becoming disabled, suggesting that for some women the transition to non-employment may be permanent. Fourteen percent of previously working women diagnosed with breast cancer reported that they were not employed, but had a job. Perhaps these women will return to work at a later time. The non-employment effect of breast cancer appears to be about twice as strong for African-American women. Reasons why breast cancer has a stronger effect on African-American women are unclear and warrant further investigation. Possible explanations include those that are job-related (e.g., physical demands) and/or treatment related (e.g., more aggressive and/or toxic regimens). Upon diagnosis with invasive breast cancer, women and their families must be prepared for some level of economic loss. Future studies are needed to explore in greater depth reasons why many women do not work 6 months following diagnosis and to develop interventions that minimize non-employment. For example, since many women with cancer reported that their reason for not working was because of symptoms related to treatment, perhaps interventions that reduce these symptoms will, in turn, minimize the impact on patients’ abilities to work. Cancer patients may also be unaware that employers, through provisions of the Americans with Disabilities Act (ADA), are required to make reasonable accommodations to their illness (which may include time off for treatment, rest breaks, and possible job restructuring). The Nation's health priorities focus on early detection and turning once life-threatening conditions into chronic conditions (U.S. Department of Health and Human Services, 2000). If we estimate that 50% of the American Cancer Society's 140,000 predicted cases of breast cancer are working women, approximately 70,000 women will experience labor market consequences attributable to cancer each year. Our study demonstrates that breast cancer will lead to substantial short-term and in some cases perhaps permanent reductions in labor supply. With the exception of a small reduction in hours worked, the negative labor supply effects were not observed for women with in situ cancers—lending additional support to arguments for early detection and treatment. Later stage cancers, on the other hand, accounted for breast cancer's negative labor supply effects.