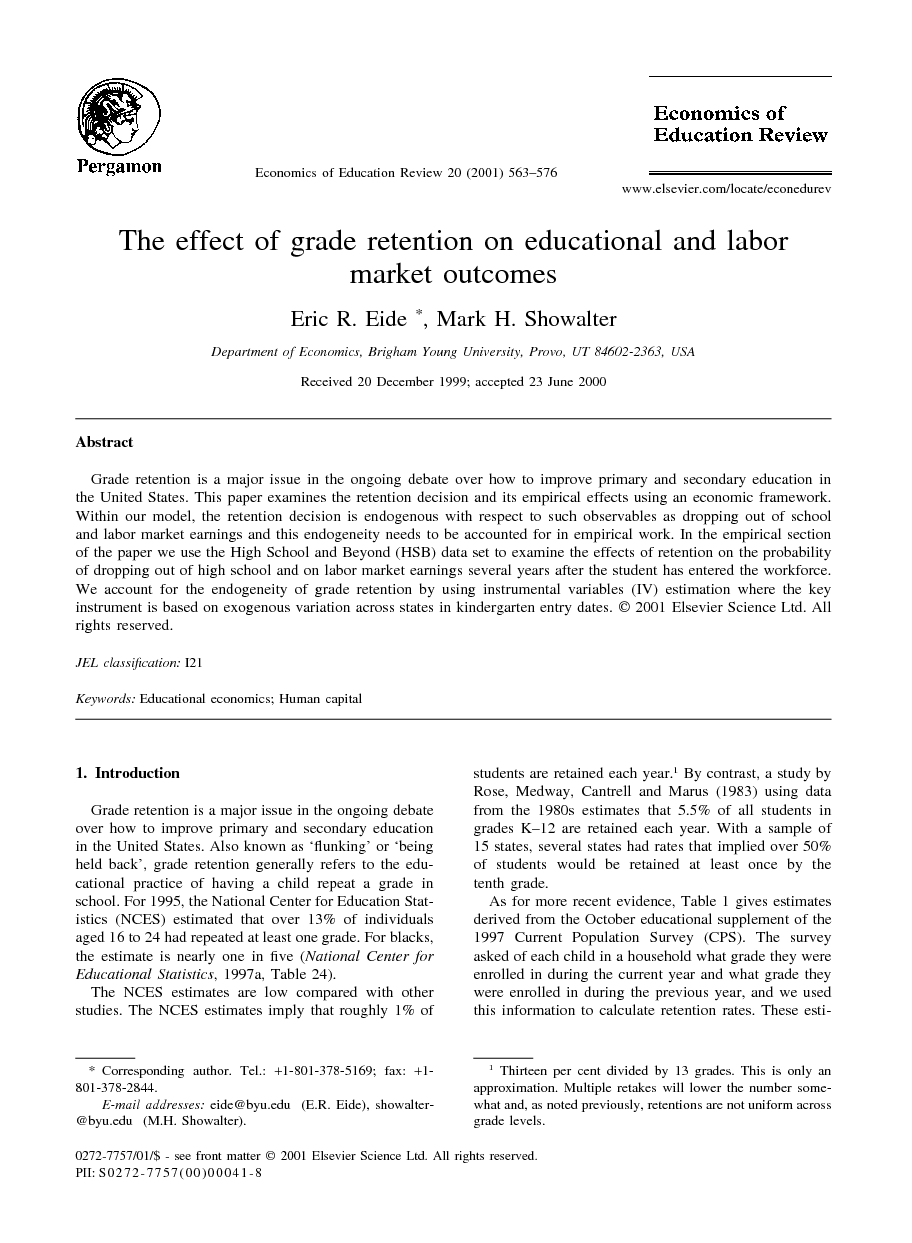 Grade retention is a major issue in the ongoing debate over how to improve primary and secondary education in the United States. This paper examines the retention decision and its empirical effects using an economic framework. Within our model, the retention decision is endogenous with respect to such observables as dropping out of school and labor market earnings and this endogeneity needs to be accounted for in empirical work. In the empirical section of the paper we use the High School and Beyond (HSB) data set to examine the effects of retention on the probability of dropping out of high school and on labor market earnings several years after the student has entered the workforce. We account for the endogeneity of grade retention by using instrumental variables (IV) estimation where the key instrument is based on exogenous variation across states in kindergarten entry dates.

Grade retention is a widely used, yet controversial practice. Supporters argue that retention provides students an additional year to gain important academic skills and emotional maturity. However, many researchers assert that repeating a grade negatively affects a student's educational career. In this paper we examine the retention decision and its empirical effects within an economic framework, focusing on the effect of retention on eventual labor market earnings, paying particular attention to the potential endogeneity of the retention decision. For all demographic groups, the OLS estimates show a statistically significant positive correlation between retention and dropping out of high school and a statistically significant negative correlation between retention and post-high school labor market earnings. These findings are consistent with much of the previous empirical research on grade retention. However, the IV estimates which account for endogeneity differ markedly from the OLS estimates. For whites, the estimated IV coefficients are opposite in sign from the OLS coefficients which suggests that grade retention may have some benefit to students by both lowering dropout rates and raising labor market earnings. We cannot strongly state, however, that grade retention is a useful policy since the IV estimates tended to be statistically indistinguishable from zero, although it is important to note that the parameter estimates hinted at relatively large effects. For blacks, the IV approach gave very poor first-stage results and the resulting IV estimates are not informative. The difference in estimation results between blacks and whites is somewhat puzzling and potentially troubling. The first-stage regression results for whites suggest that our IV identification strategy works reasonably well and is consistent with our theoretic framework of altruistic decision-makers optimizing on behalf of a child. However, for blacks the first-stage results yield insignificant results with no clear pattern. One possible explanation is that the sample size for blacks is substantially smaller and thus if we had more observations we could expect similar results to those for whites. But when we reduced the sample size for whites, the pattern of the coefficients remains much the same and in the unreduced sample, although statistical significance unsurprisingly declines. This leads us to wonder whether sample size is the primary reason for the difference. The other possibility is that the retention decision process for blacks is fundamentally different from whites. We emphasize that we do not currently have good evidence on this so we can only make conjectures. One conjecture within the context of the model is that parents or decision-makers in black households use a different algorithm than in white households. Another possibility is that school officials use a different criterion for blacks than whites. Obviously other explanations are also possible, but this seems like an area worthy of further investigation. Another policy issue raised by this research is whether decision-making for retention can be considered optimal in any sense. We modeled the decision being made by parents equating expected marginal costs and benefits, but these will necessarily be private costs and benefits. Since the vast majority of children in the US are educated in public schools, a parent's decision to retain a child will ignore the cost to the public treasury in spending another year educating that child and that cost is not factored into the decision process. The prediction would then be that retention is done too often because parents to not face the full marginal cost. A fuller examination of this topic is also probably worth considering.