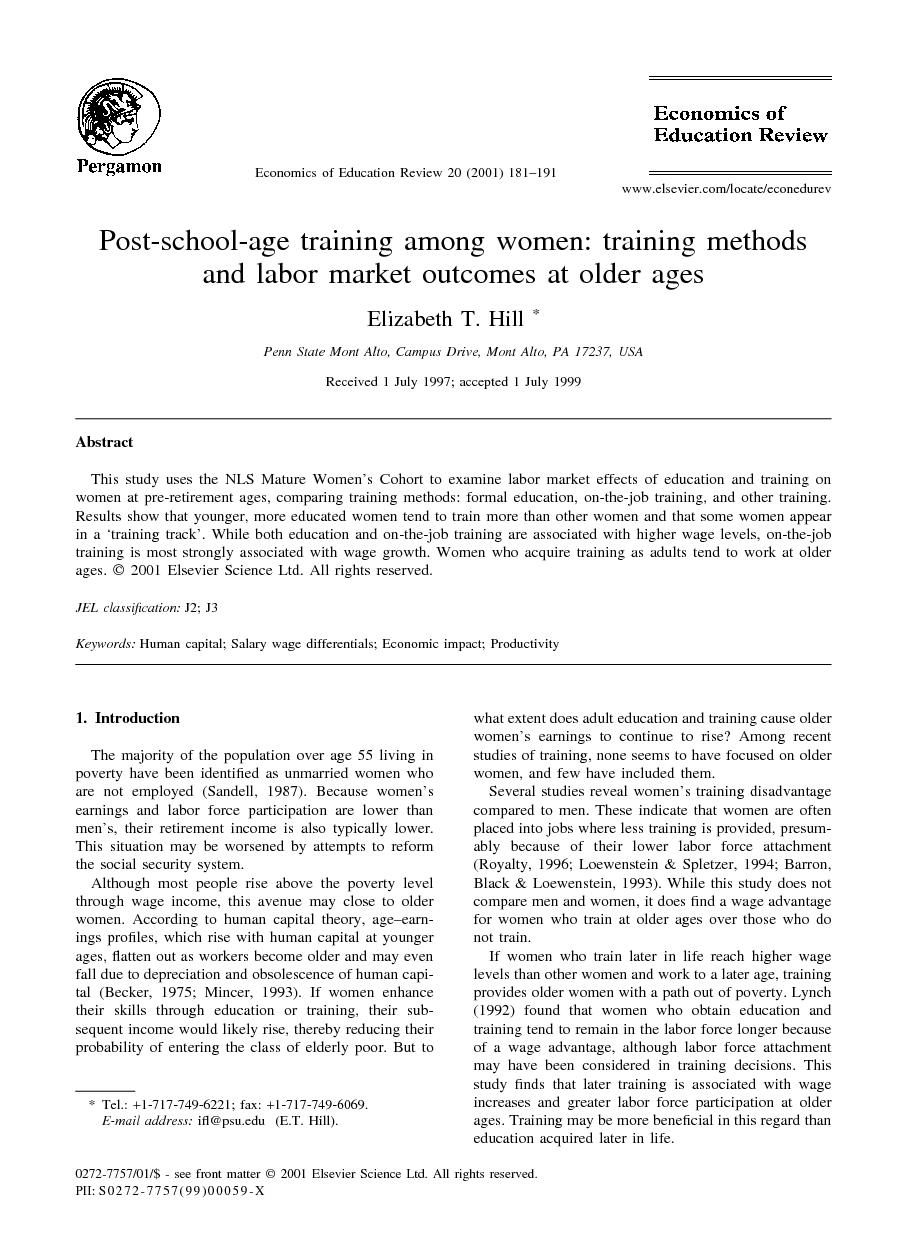 The majority of the population over age 55 living in poverty have been identified as unmarried women who are not employed (Sandell, 1987). Because women's earnings and labor force participation are lower than men's, their retirement income is also typically lower. This situation may be worsened by attempts to reform the social security system. Although most people rise above the poverty level through wage income, this avenue may close to older women. According to human capital theory, age–earnings profiles, which rise with human capital at younger ages, flatten out as workers become older and may even fall due to depreciation and obsolescence of human capital (Becker, 1975 and Mincer, 1993). If women enhance their skills through education or training, their subsequent income would likely rise, thereby reducing their probability of entering the class of elderly poor. But to what extent does adult education and training cause older women's earnings to continue to rise? Among recent studies of training, none seems to have focused on older women, and few have included them. Several studies reveal women's training disadvantage compared to men. These indicate that women are often placed into jobs where less training is provided, presumably because of their lower labor force attachment (Royalty, 1996, Loewenstein & Spletzer, 1994 and Barron, Black & Loewenstein, 1993). While this study does not compare men and women, it does find a wage advantage for women who train at older ages over those who do not train. If women who train later in life reach higher wage levels than other women and work to a later age, training provides older women with a path out of poverty. Lynch (1992) found that women who obtain education and training tend to remain in the labor force longer because of a wage advantage, although labor force attachment may have been considered in training decisions. This study finds that later training is associated with wage increases and greater labor force participation at older ages. Training may be more beneficial in this regard than education acquired later in life. Although many women obtain training after the usual schooling age and government training programs exist to promote women's training, studies have not compared training methods and subsequent labor market benefits for older women. Government training programs such as the Job Training Partnership Act and the Displaced Homemaker Program, which have attempted to help offset women's labor market disadvantage, have not focused on one training method. Some grant aid for women to further their education. Others provide incentives to employers for hiring and training women, thus providing both on-the-job training and work experience. But if one method of training provides a greater labor market benefit than others, increased government aid for the more beneficial training is desirable. If one training method: classroom, on-the-job, or off-the-job training, results in greater wage increases, that information would also help women make better training decisions. This study finds that on-the-job training appears to provide the greatest wage advantage.1 The person making the training decision differs somewhat according to the type of training. Employers decide, at least partly, who receives on-the-job training while workers themselves make more decisions about education and other training programs. Determining the characteristics of women who receive on-the-job training will provide insight into the types of women employers choose to train. If the access of older women to on-the-job training is blocked because of a shorter investment return period, this type of training will not help solve their problems. Results show that women can improve their wages with training even at older ages. But to obtain on-the-job training—which raises wages most—it appears necessary that women show employers that their training expenditures will pay off. Loewenstein and Spletzer's (1994) observation that employers delay substantial training in women appears to support this notion. Women with early labor force attachment and additional work experience obtain more training at work. And both work experience and on-the-job training are associated with wage increases and labor force participation at older ages. This study finds that other factors may offset the training disadvantage of older women. Better-educated women train more, a finding similar to that of Lillard and Tan (1992). Some women move into a training track. The results indicate that later education is not significant with regard to wage increases for older women, a result which differs from Lynch (1992) who found that education results in a wage change advantage for younger women.

This paper analyzes the labor market effects of training for older women, a somewhat neglected segment of the population, many of whom have economic problems. These workers often encounter multiple labor market disadvantages and the resultant low incomes. The majority of the women in the sample had obtained post-school-age training, a substantial number acquiring training by each of the three methods: education, on-the-job training, and other training (Table 1). Women in the more highly-skilled occupations commonly acquired training by more than one training method (Table 2), but all training methods were used for all of the occupations. Compared to other occupations, respondents in professional/technical and crafts occupations acquired more education while managers, clerical workers, and operatives received more on-the-job training. Women in less-skilled occupations tended to obtain training other than education and on-the-job training, appearing to confirm the findings of other studies (Loewenstein & Spletzer, 1994 and Veum, 1993) that less-skilled women are more likely to seek training on their own. Employers appear to consider the return on their investment when deciding who to train, at least for on-the-job training courses. Younger women and those with a greater early labor market commitment received more on-the-job training (Table 3). Some women seem to place into a training track. Different forms of human capital appeared as complements rather than substitutes. Respondents with higher 1967 educational levels and women who obtained post-school-age education and training before 1967 trained more by all methods between 1967 and 1984. And those who trained by one method during the survey period also tended to train by other methods. Although most other studies have not focused on older women, they have generally agreed on the complementarity of post-school training and original educational level as well as the positive effect of training on wages. Lillard and Tan (1992), analyzing the CPS, obtained such results. Lynch (1992), examining NLS Youth, found that schooling raised the probability of acquiring off-the-job training and apprenticeships although it showed little effect on receiving on-the-job training for men and women. Education and on-the-job training were associated with higher wage levels, education working through placement into higher-paying occupations (Table 4). On-the-job training was most strongly associated with wage increases (Table 5). Barnow (1987) found similar results in a study of CETA recipients of all ages. The acquisition of both on-the-job and other training as adults was associated with labor force participation by the women at older ages while obtaining education was not (Table 6). The positive association between on-the-job training and wages agrees with Lynch (1992), who concluded that on-the-job training had a large effect on wages. That later education is not associated with wage increases differs from Lynch's findings for a younger cohort. This study finds that the labor market disadvantage of older women can be helped through training and somewhat surprisingly, that they can alleviate their age disadvantage in obtaining the most beneficial type of training, on-the-job training, by showing employers that training investment in them will pay off. And it does pay off for the women and their employers in that women who train remain in the labor force at older ages and sustain higher productivity as measured by wages. The results suggest that programs to help older women should emphasize incentives for women to train and remain committed to the labor force so that they can prove themselves to their employers. Programs should also emphasize incentives to employers to provide on-the-job training for older women.12