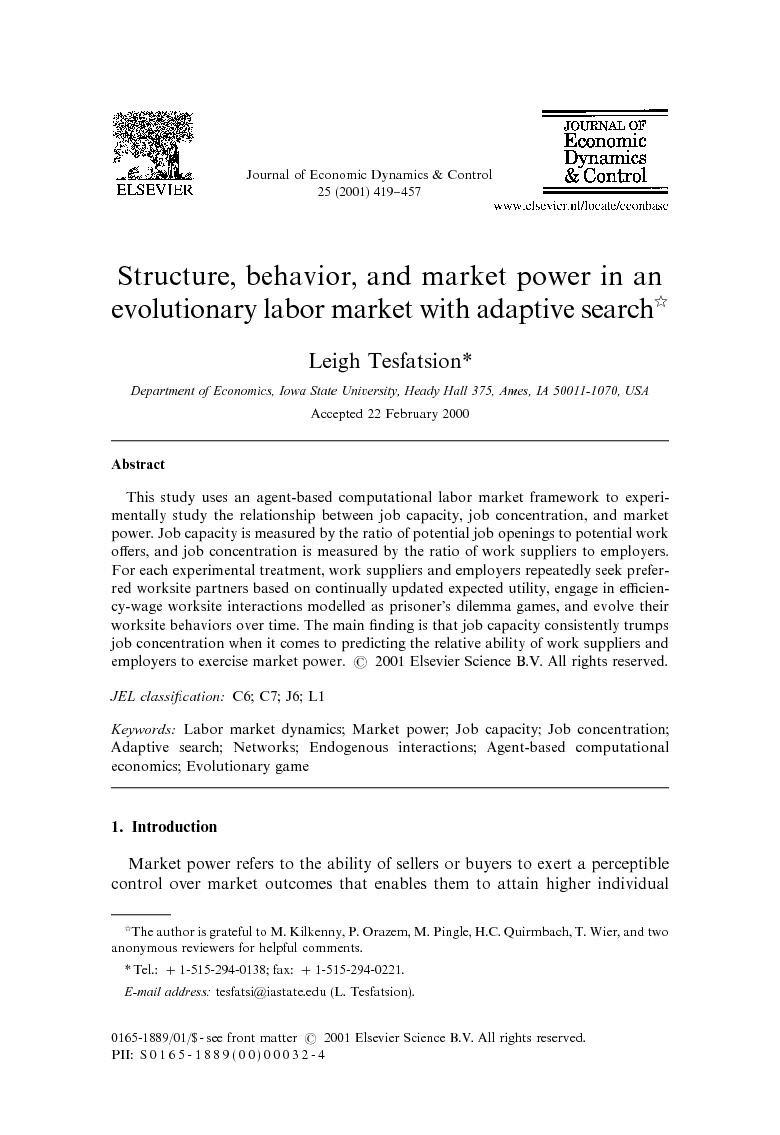 This study uses an agent-based computational labor market framework to experimentally study the relationship between job capacity, job concentration, and market power. Job capacity is measured by the ratio of potential job openings to potential work offers, and job concentration is measured by the ratio of work suppliers to employers. For each experimental treatment, work suppliers and employers repeatedly seek preferred worksite partners based on continually updated expected utility, engage in efficiency-wage worksite interactions modelled as prisoner's dilemma games, and evolve their worksite behaviors over time. The main finding is that job capacity consistently trumps job concentration when it comes to predicting the relative ability of work suppliers and employers to exercise market power.

As shown in previous sections, the aggregate market power findings of this study indicate that job capacity generally has the hypothesized H1 and H3 effects: all else equal, increased job capacity increases the market power of work suppliers and reduces the market power of employers both in absolute and relative terms. Disaggregated market power findings reveal that these effects are particularly strong and clear when attention is focused on the most commonly observed network formations for each treatment setting. In contrast, neither aggregated nor disaggregated market power findings provide much support for the job concentration hypotheses H2 and H4. On the contrary, controlling for job capacity, the effects of job concentration on the ability of work suppliers and employers to exercise market power are surprisingly small and unsystematic. Hypotheses H2 and H4 seem a priori intuitive on the grounds that concentrating work offers in fewer work supplier hands should provide work suppliers with an increased opportunity to exercise monopoly power, and concentrating job openings in fewer employer hands should provide employers with an increased opportunity to exercise monopsonist power. On the other hand, it may be that too much concentration lessens the ability of work suppliers or employers as a whole to adapt their worksite strategies in a flexible manner in response to the worksite strategies used by their worksite partners. Consequently, there may be too little diversity in the pool of worksite strategies used by the concentrated agent type for evolutionary selection pressures to efficiently act upon. To test this inflexibility hypothesis, it will be necessary to introduce the absolute numbers of work suppliers and employers as treatment factors in addition to their concentration ratio. It will also be necessary to examine alternative learning algorithms calibrated more carefully to the learning behavior observed in real-world labor markets and in human-subject labor market experiments. Further work is needed to test the robustness of the findings of this study to variations in the scope and range of other parameter specifications as well. As preliminary as these findings may be, however, they do caution against the common practice of confounding capacity and concentration effects in market power studies by letting these two factors vary together in an uncontrolled manner. A potentially important by-product of the current study is a better understanding of the fundamental role played by organizational costs in sculpting and sustaining network formations and hence in determining the welfare and market power levels attainable by work suppliers and employers. For example, when job capacity is tight, high job search costs can result in widespread worker discouragement and exit from the labor force that ends up hurting employers as well as work suppliers. Consequently, although tight job capacity tends to favor employers, it also increases the risk of network coordination failure. Organizational costs are a key focus of researchers in transactions costs economics — see, for example, Williamson and Marsten (1999). Nevertheless, the significant problems posed by network organizational costs for the definition and measurement of market power have not received much attention to date. A second potentially important by-product of the current study is a better appreciation of the role played by behavioral flexibility in protecting agents against the exercise of market power by other agents. In the labor market framework, work suppliers and employers repeatedly choose and refuse their worksite partners and evolve their worksite behaviors over time. Thus, even when jobs are in excess supply, attempts by work suppliers to exert market power by repeatedly defecting in worksite interactions can provoke retaliatory defections by employers as well as firings (refusals of all future work offers from offending work suppliers). Similarly, even when jobs are tight, attempts by employers to exert market power by repeatedly defecting in worksite interactions can provoke retaliatory defections by work suppliers as well as quits (work suppliers redirecting future work offers elsewhere). Consequently, although structural asymmetries tend to favor one agent type over another, attempts by the favored agent type to exploit this advantage increase the risk of behavioral coordination failure. In summary, agent-based computational frameworks such as the labor market framework used in this study permit the systematic experimental investigation of behavioral and network formation processes that appear critical for understanding the relation between structure, behavior, and market power in real-world labor markets.