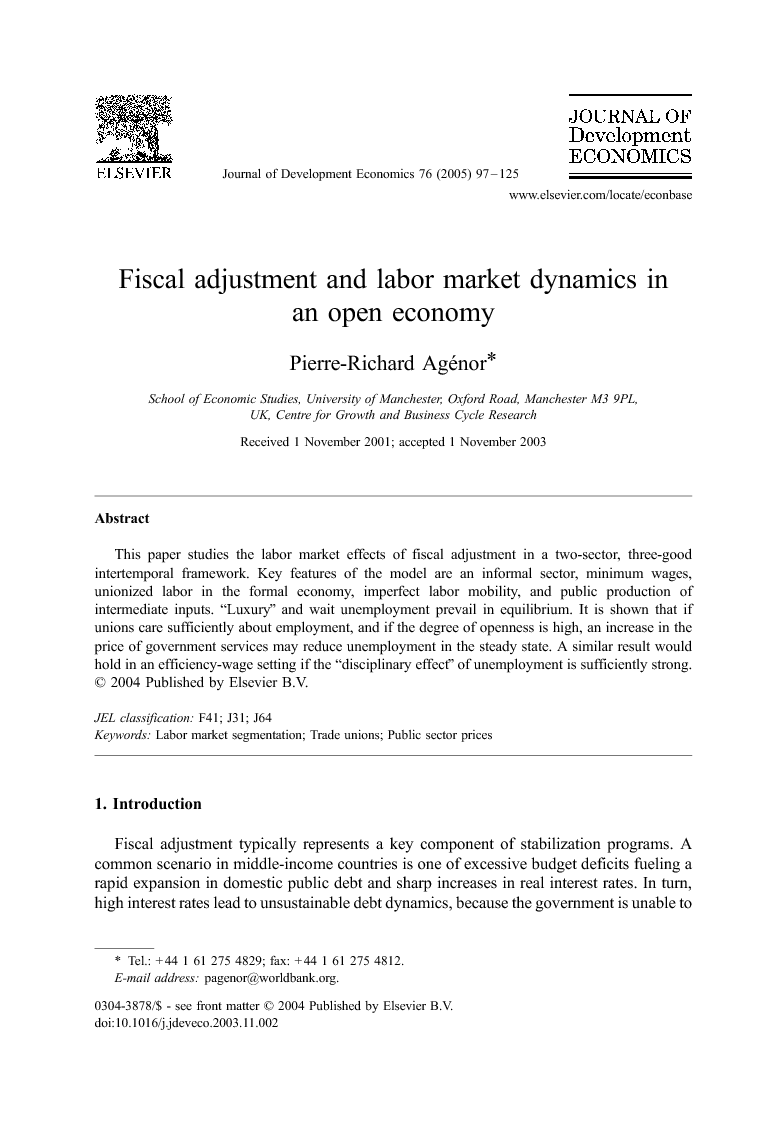 This paper studies the labor market effects of fiscal adjustment in a two-sector, three-good intertemporal framework. Key features of the model are an informal sector, minimum wages, unionized labor in the formal economy, imperfect labor mobility, and public production of intermediate inputs. “Luxury” and wait unemployment prevail in equilibrium. It is shown that if unions care sufficiently about employment, and if the degree of openness is high, an increase in the price of government services may reduce unemployment in the steady state. A similar result would hold in an efficiency-wage setting if the “disciplinary effect” of unemployment is sufficiently strong.

The role of the labor market in the process of economic reform in developing countries has been the subject of renewed interest in recent years. The purpose of this paper has been to study the effects of fiscal adjustment in an intertemporal macroeconomic framework that captures some of the most salient features of these markets. The model developed here accounts, in particular, for the existence of a large informal sector and the use of public intermediate inputs in the production of tradables in the formal sector. Labor market segmentation was introduced through minimum wage legislation for unskilled labor and the assumption that wages earned by skilled workers in the exportable sector are determined by a utility—maximizing trade union. Despite wage flexibility in the informal sector, “quasi-voluntary” unemployment of both skilled and unskilled workers was shown to typically emerge in equilibrium. Skilled unemployment emerged as a result of the assumption that the opportunity cost of leisure is lower (and/or the reservation wage is higher) than the going wage in the informal sector, whereas unskilled unemployment resulted from “wait” or “queuing” considerations in the tradition of Harris and Todaro (1970). The model was used to study the macroeconomic effects of an increase in the price of government services. The main result of the analysis is that if indirect effects on skilled workers' wages are sufficiently strong (or equivalently if unions care sufficiently about skilled employment), and if the degree of openness of the economy is sufficiently high, unemployment of both skilled and unskilled labor may actually fall in the long run. It was also pointed out that the assumption that unions care about both wages and employment is fairly general and that results qualitatively similar to those derived here could be obtained in models in which firms set wages on the basis of efficiency considerations, as long as unemployment serves a sufficiently strong role as a “discipline device.” The policy implications of the analysis are thus quite important—arguments against adjustment in the price of government services based on possible adverse employment effects are therefore not necessarily valid once general equilibrium interactions are taken into account. It was also noted that there are two testable assumptions in the model: the first relates to the structure of unions' preferences (namely, the fact that unions in the private formal sector must care sufficiently about employment), and the second to the assumption that the skilled product wage in the formal sector and the real exchange rate are negatively related. Unfortunately, there is no convincing work at the moment that would allow reliable statements about the direction and strength of these effects. The model developed in this paper could be extended in a variety of ways, by considering for instance the case in which government services are also used as intermediate inputs in the production process in the informal sector. In such conditions, output of informal sector goods would also fall on impact following an increase in the price of government services, rather than remaining unchanged; otherwise, however, the effects of this shock would remain qualitatively similar to those described earlier. Perhaps a more fruitful extension would be to introduce money and distortionary taxation, and to assume that informal sector activities are taxed at a lower rate (possibly zero) than those performed in the formal sector. Because, as shown earlier, fiscal adjustment policies typically lead to a reallocation of production activities and employment across sectors in the long run, they also affect tax revenue. Such changes in revenue may have important implications for alternative sources of deficit financing, notably the degree of reliance on the inflation tax. Extensions of this type, together with detailed empirical work on labor demand elasticities, the degree of labor mobility, and the degree of relative wage rigidity across sectors, are essential for improving further our understanding of the aggregate effects of adjustment programs on wages and employment.