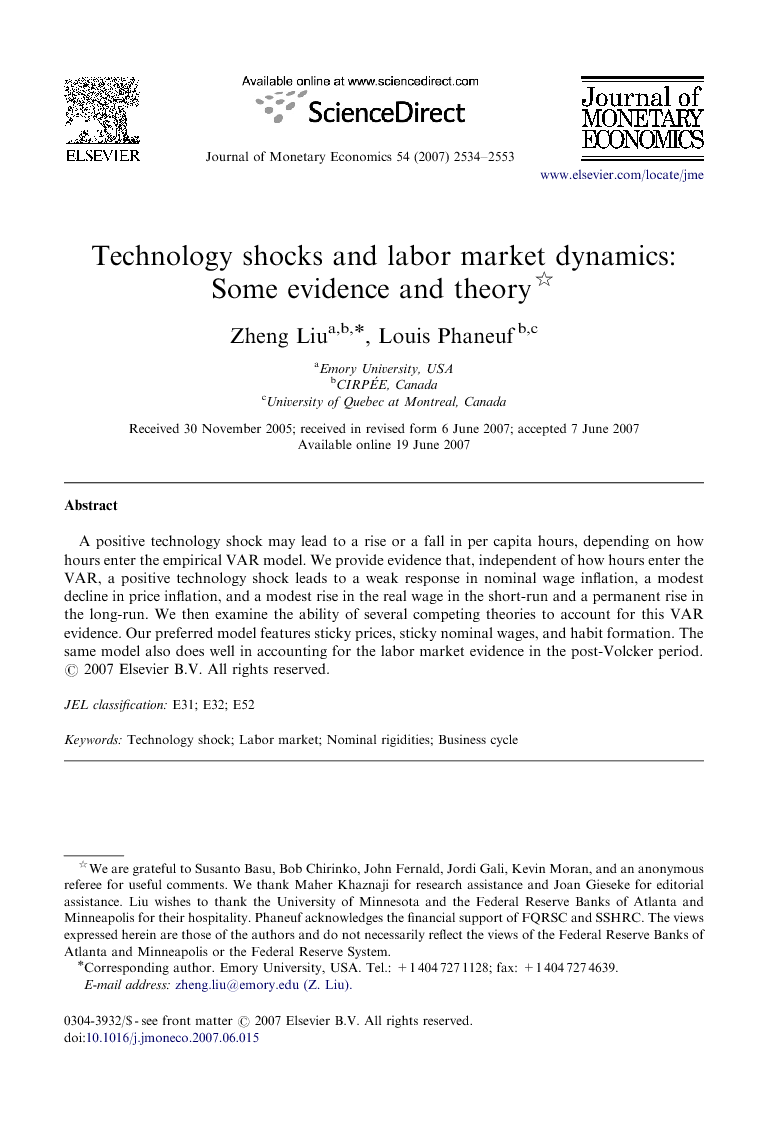 A positive technology shock may lead to a rise or a fall in per capita hours, depending on how hours enter the empirical VAR model. We provide evidence that, independent of how hours enter the VAR, a positive technology shock leads to a weak response in nominal wage inflation, a modest decline in price inflation, and a modest rise in the real wage in the short-run and a permanent rise in the long-run. We then examine the ability of several competing theories to account for this VAR evidence. Our preferred model features sticky prices, sticky nominal wages, and habit formation. The same model also does well in accounting for the labor market evidence in the post-Volcker period.

Competing business cycle theories have often been evaluated based on their implications on labor-market dynamics. Some recent empirical studies find that a technology improvement typically leads to a fall in per capita hours. Yet, other studies suggest that a technology improvement may also be consistent with a rise in hours. These findings have stimulated a lively debate, both on the empirical validity of such findings and on the theoretical implications. The lack of a consensus about how hours respond to technology shocks presents difficulties in evaluating competing business cycle theories based solely upon their implications on hours dynamics. We have taken up this issue from a broader perspective. We have examined the effects of technology shocks on a broader set of labor-market variables, including wages and prices, not just hours. We find that, although a positive technology shock can lead to a rise or a fall in hours depending on the details of empirical specifications, the shock consistently leads to a weak response of wage inflation, a modest decline in price inflation, and a modest rise in real wages on impact and a permanent rise in the long-run. These patterns of adjustments in wages and prices are remarkably consistent across our alternative empirical models. We argue on this ground that, for the purpose of evaluating competing business cycle theories, it is more informative to examine the models’ predicted dynamic responses of wages and prices following technology shocks than focusing solely on hours dynamics. Under this criterion, we have shown that a model without nominal rigidities, such as a standard RBC model (or its variants), does not do well. We have also shown that a pure SP model fare no better, as it predicts the wrong sign of the response of real wages and the wrong magnitude of the response of nominal wages. We further propose that, an alternative model with both price and nominal wage rigidities, coupled with habit formation in preferences, has a better chance of succeeding in explaining the observed labor-market dynamics following technology shocks. In a broad sense, the new generation of DSGE models with micro-foundations and nominal wage and price rigidities has been fairly successful in explaining the dynamic effects of monetary shocks (e.g., Huang et al., 2004 and Christiano et al., 2005). Our results suggest that this class of models, which marks a significant departure from the traditional RBC paradigm, can also be useful in explaining the dynamic effects of technology shocks.