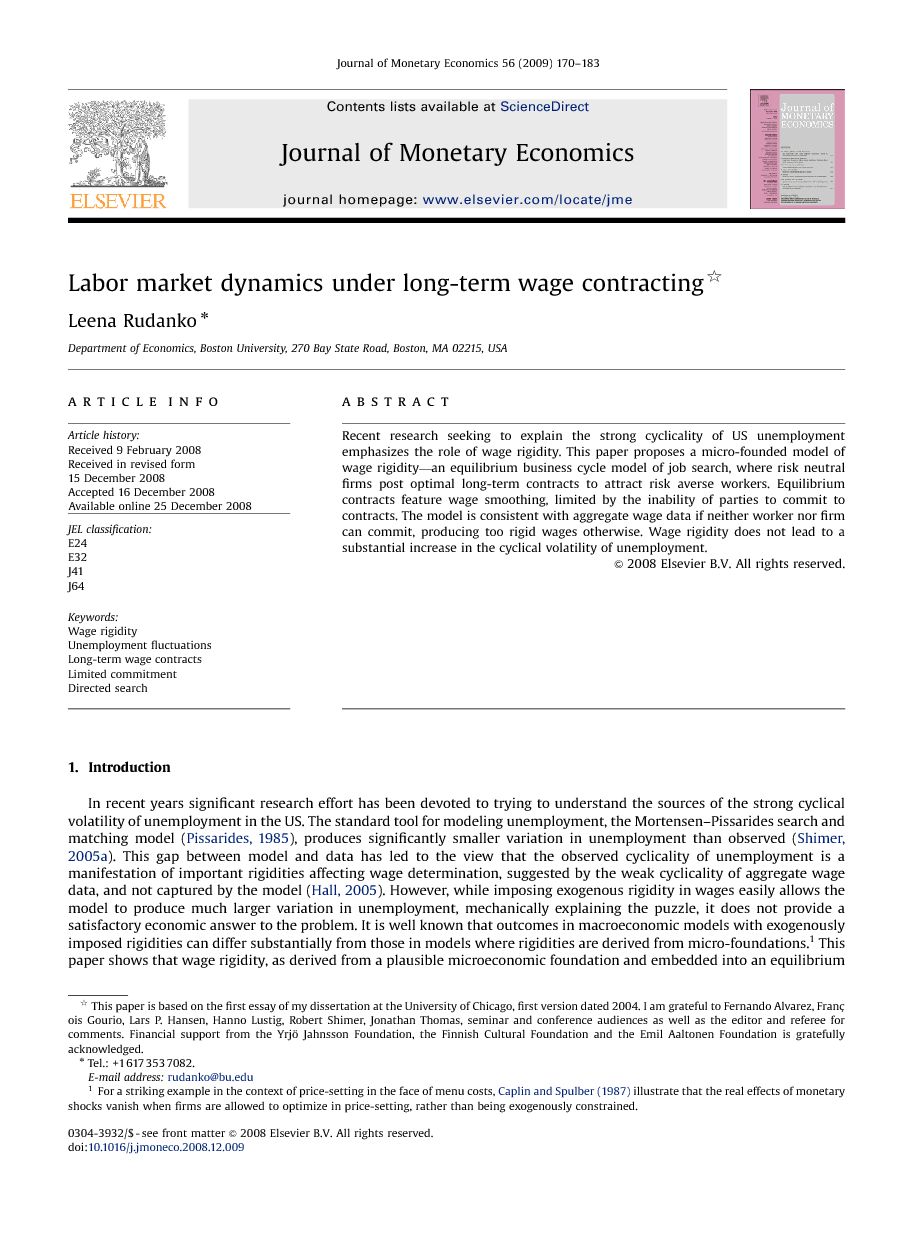 Recent research seeking to explain the strong cyclicality of US unemployment emphasizes the role of wage rigidity. This paper proposes a micro-founded model of wage rigidity—an equilibrium business cycle model of job search, where risk neutral firms post optimal long-term contracts to attract risk averse workers. Equilibrium contracts feature wage smoothing, limited by the inability of parties to commit to contracts. The model is consistent with aggregate wage data if neither worker nor firm can commit, producing too rigid wages otherwise. Wage rigidity does not lead to a substantial increase in the cyclical volatility of unemployment.

The aggregate wage is not informative about the measure of wage rigidity relevant for understanding unemployment fluctuations: how much the present value of wages used to attract new workers varies over the cycle. In an ideal world, one could estimate these present values for individual workers directly, using a sufficiently wide and long panel data set with information on tenure, and compare them for workers hired in booms versus recessions. With limitations on data, a more practical approach is to make assumptions about the type of contract governing the evolution of individual wages in the data, and take advantage of that structure to calculate estimates of these present values. Kudlyak (2007) conducts such an exercise, failing to find evidence of significant rigidity in wages. In related work, Haefke et al. (2007) and Pissarides (2007) interpret the higher cyclical volatility of starting wages, as compared to that of the aggregate wage, as evidence against wage rigidity. Creating the link between the starting wage and the present value requires assumptions about how wages evolve in contracts, and how informative the results are hinges on how accurate those assumptions are. Here the limited-commitment contracting framework has the advantage of supporting empirical literature.16 This paper is not the first to look for micro-foundations for wage rigidity, as called for by Hall (2005). Gertler and Trigari (2008) introduce staggered wage bargaining into the Mortensen–Pissarides model, allowing only a subset of firms to adjust their wages each period. In their model hiring decisions are distorted in those firms that are constrained to keep wages fixed. Hall and Milgrom (2008) argue that the threat points in the bargaining problem faced by workers and firms in the Mortensen–Pissarides model are misspecified. Altering these threat points to reflect the delay of negotiations rather than the ending of negotiations creates some added rigidity in the present value of wages. Several authors have also explored the role of informational asymmetries and incomplete markets for creating wage rigidities, interesting approaches which are non-trivial to incorporate into quantitative macroeconomic analysis.