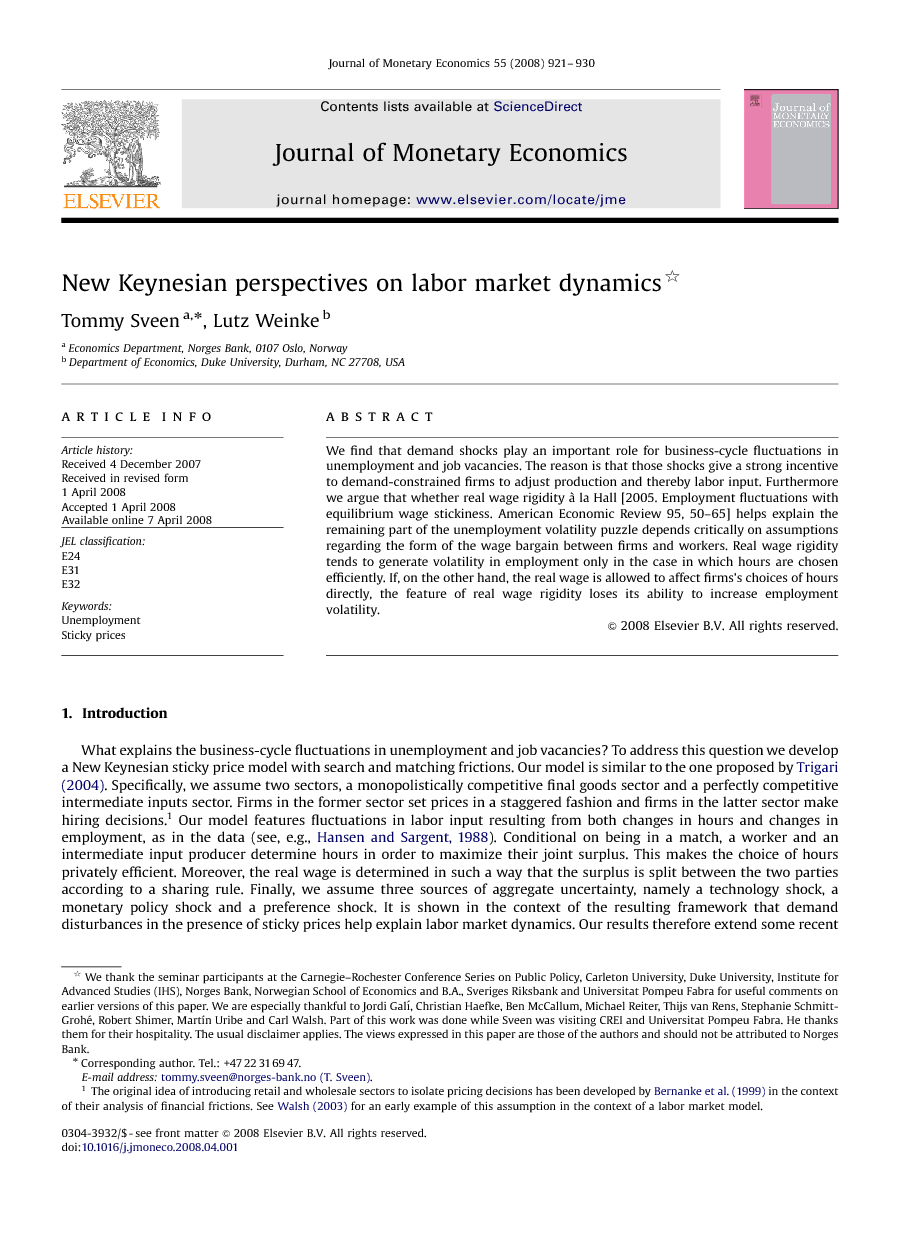 We find that demand shocks play an important role for business-cycle fluctuations in unemployment and job vacancies. The reason is that those shocks give a strong incentive to demand-constrained firms to adjust production and thereby labor input. Furthermore we argue that whether real wage rigidity à la Hall [2005. Employment fluctuations with equilibrium wage stickiness. American Economic Review 95, 50–65] helps explain the remaining part of the unemployment volatility puzzle depends critically on assumptions regarding the form of the wage bargain between firms and workers. Real wage rigidity tends to generate volatility in employment only in the case in which hours are chosen efficiently. If, on the other hand, the real wage is allowed to affect firms's choices of hours directly, the feature of real wage rigidity loses its ability to increase employment volatility.

What explains the business-cycle fluctuations in unemployment and job vacancies? To address this question we develop a New Keynesian sticky price model with search and matching frictions. Our model is similar to the one proposed by Trigari (2004). Specifically, we assume two sectors, a monopolistically competitive final goods sector and a perfectly competitive intermediate inputs sector. Firms in the former sector set prices in a staggered fashion and firms in the latter sector make hiring decisions.1 Our model features fluctuations in labor input resulting from both changes in hours and changes in employment, as in the data (see, e.g., Hansen and Sargent, 1988). Conditional on being in a match, a worker and an intermediate input producer determine hours in order to maximize their joint surplus. This makes the choice of hours privately efficient. Moreover, the real wage is determined in such a way that the surplus is split between the two parties according to a sharing rule. Finally, we assume three sources of aggregate uncertainty, namely a technology shock, a monetary policy shock and a preference shock. It is shown in the context of the resulting framework that demand disturbances in the presence of sticky prices help explain labor market dynamics. Our results therefore extend some recent work by Hall (2005), Shimer (2005), Costain and Reiter (2008) and Hagedorn and Manovskii (2008). They show that search frictions generally cannot explain the cyclical behavior of unemployment and vacancies in response to technology shocks. Let us motivate our modeling choices somewhat more. It is well understood that sticky prices have empirically plausible implications for the dynamic effects of technology shocks: demand-constrained firms take advantage of a positive technology shock by using fewer factor inputs (see, e.g., Galí, 1999). We show that this economic mechanism generally implies that the unemployment volatility puzzle2 is even more severe. On the other hand, sticky prices enhance the role of demand shocks for business-cycle fluctuations. Demand shocks give a strong incentive to firms to adjust labor input and we show that this helps explain the large employment fluctuations (relative to output) that are found in the data. It is natural to ask whether the remedy proposed by Shimer (2005), namely real wage rigidity à la Hall (2005),3 can be used to explain the remaining part of the unemployment volatility puzzle. In the presence of efficient bargaining, real wage rigidity increases the relative volatility of employment. Intuitively, a larger fraction of the joint surplus of a match accrues to firms if production is expanded. This increases the incentive to post vacancies. Interestingly, the conclusion that real wage rigidity helps explain labor market dynamics is therefore robust with respect to the introduction of sticky prices. However, the effectiveness of real wage rigidity in generating labor market dynamics is not robust along another important dimension. If we change the bargaining mechanism in such a way that changes in the real wage are allowed to affect a firm's choice of hours directly, then real wage rigidity loses its ability to imply large variations in employment. By now there exists a large and growing literature which seeks to address the unemployment volatility puzzle. Most of that literature studies the type of wage contract used in the model (see, e.g., Hall, 2005, Hornstein et al., 2005, Gertler and Trigari, 2006, Yashiv, 2006 and Hall and Milgrom, 2008).4 Our main focus is different. We point at the importance of demand disturbances and show that their role for employment volatility is enhanced by an empirically plausible degree of price stickiness. It is in this sense that we provide a New Keynesian perspective on labor market dynamics. The remainder of the paper is organized as follows. Section 2 outlines the model. Section 3 presents the results and Section 4 concludes.

Two main results are obtained in the present paper. First, we emphasize the importance of demand disturbances for the business-cycle fluctuations in unemployment and job vacancies. The economic mechanism is simple: demand shocks give a strong incentive to demand-constrained firms to adjust labor input. Second, the extent to which real wage rigidity à la Shimer (2005) and Hall (2005) helps explain the remaining part of the unemployment volatility puzzle depends critically on assumptions regarding the form of the wage bargain between firms and workers. Real wage rigidity tends to imply a large increase in employment volatility only in the case in which hours are jointly determined by workers and firms as the outcome of a privately efficient bargain. On the other hand, if the real wage is allowed to affect firms's choices of hours directly, the feature of real wage rigidity is much less effective in increasing employment volatility. Our New Keynesian perspective on labor market dynamics leads us to think that economic mechanisms which imply additional volatility in the average marginal cost will be needed to make further progress in understanding labor market dynamics. Clearly, structural model estimation will be needed to conduct the counter-factual simulations that can identify which features will ultimately be regarded as the solution to the unemployment volatility puzzle. The recent paper by Gertler et al. (2007) is a step in that direction.