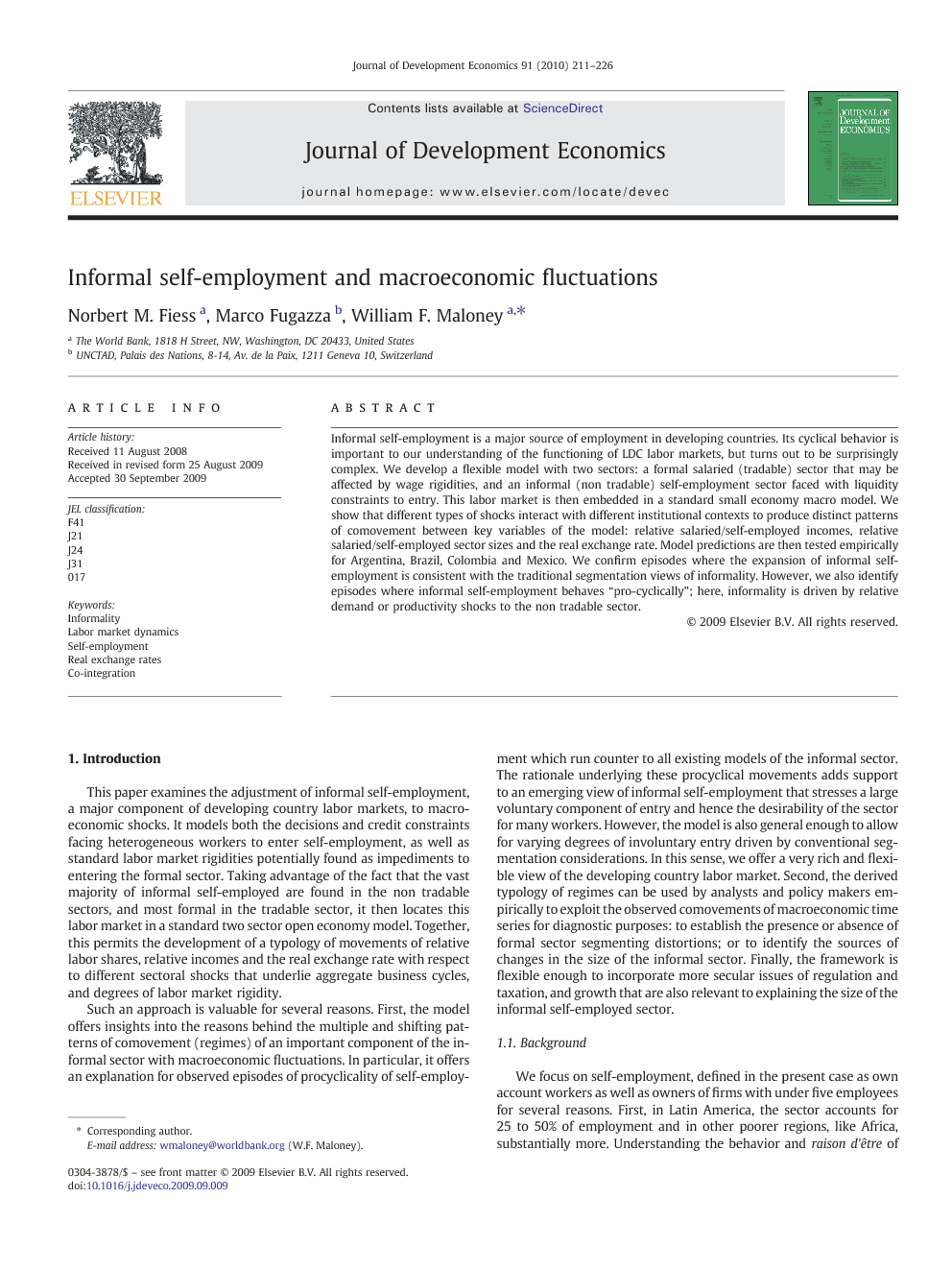 Informal self-employment is a major source of employment in developing countries. Its cyclical behavior is important to our understanding of the functioning of LDC labor markets, but turns out to be surprisingly complex. We develop a flexible model with two sectors: a formal salaried (tradable) sector that may be affected by wage rigidities, and an informal (non tradable) self-employment sector faced with liquidity constraints to entry. This labor market is then embedded in a standard small economy macro model. We show that different types of shocks interact with different institutional contexts to produce distinct patterns of comovement between key variables of the model: relative salaried/self-employed incomes, relative salaried/self-employed sector sizes and the real exchange rate. Model predictions are then tested empirically for Argentina, Brazil, Colombia and Mexico. We confirm episodes where the expansion of informal self-employment is consistent with the traditional segmentation views of informality. However, we also identify episodes where informal self-employment behaves “pro-cyclically”; here, informality is driven by relative demand or productivity shocks to the non tradable sector.

This paper has offered a framework through which to study self-employment across macroeconomic fluctuations. We model a two-sector labor market in an Obstfeld–Rogoff small economy model to include heterogeneous entrepreneurial ability and credit constraints to entering informal self-employment. This allows us to generate a set of hypotheses about the comovement of relative sector sizes and earnings and sectoral shocks as captured by the real exchange rate. These patterns of comovement are then tested in a co-integration framework in Argentina, Brazil, Colombia and Mexico. Three important general findings emerge. First, we find examples of all the co-integration vectors suggested by theory suggesting that attention to country and period context is important to approaching the informal sector. In particular, and second, although the informal self-employed and formal salaried sectors often appear as elements of segmented or dual labor markets as customarily envisaged, we also find numerous episodes where they appear as one integrated labor market: numerous periods show strong comovement between relative sector sizes and earnings. This suggests that a large component of the informal sector should not be viewed as somehow inferior or queuing for formal sector employment. However, it is also the case that rigidities in the formal salaried sector can become very binding, as is most clearly the case in the dramatic crises that affected all four countries at some period, and apparently in Argentina across the entire sample. Third, these distinct patterns suggest that the pro or countercyclicality of the sectors may depend on the sectoral origin of the shocks, and the presence of binding wage rigidities. We find numerous examples where either a positive productivity or demand shock to the non tradable/informal sector leads to its expansion.