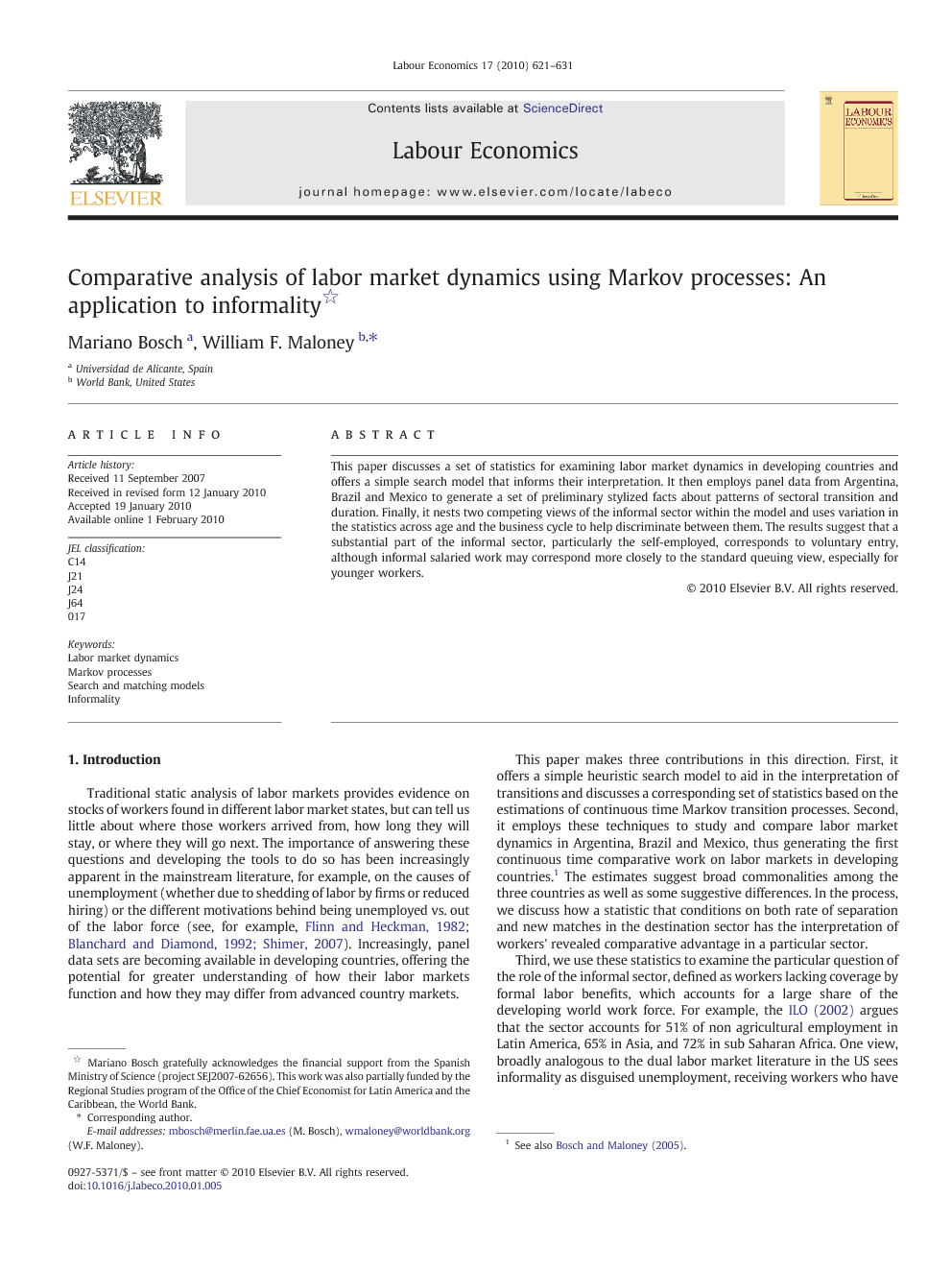 This paper discusses a set of statistics for examining labor market dynamics in developing countries and offers a simple search model that informs their interpretation. It then employs panel data from Argentina, Brazil and Mexico to generate a set of preliminary stylized facts about patterns of sectoral transition and duration. Finally, it nests two competing views of the informal sector within the model and uses variation in the statistics across age and the business cycle to help discriminate between them. The results suggest that a substantial part of the informal sector, particularly the self-employed, corresponds to voluntary entry, although informal salaried work may correspond more closely to the standard queuing view, especially for younger workers.

Traditional static analysis of labor markets provides evidence on stocks of workers found in different labor market states, but can tell us little about where those workers arrived from, how long they will stay, or where they will go next. The importance of answering these questions and developing the tools to do so has been increasingly apparent in the mainstream literature, for example, on the causes of unemployment (whether due to shedding of labor by firms or reduced hiring) or the different motivations behind being unemployed vs. out of the labor force (see, for example, Flinn and Heckman, 1982, Blanchard and Diamond, 1992 and Shimer, 2007). Increasingly, panel data sets are becoming available in developing countries, offering the potential for greater understanding of how their labor markets function and how they may differ from advanced country markets. This paper makes three contributions in this direction. First, it offers a simple heuristic search model to aid in the interpretation of transitions and discusses a corresponding set of statistics based on the estimations of continuous time Markov transition processes. Second, it employs these techniques to study and compare labor market dynamics in Argentina, Brazil and Mexico, thus generating the first continuous time comparative work on labor markets in developing countries.1 The estimates suggest broad commonalities among the three countries as well as some suggestive differences. In the process, we discuss how a statistic that conditions on both rate of separation and new matches in the destination sector has the interpretation of workers' revealed comparative advantage in a particular sector. Third, we use these statistics to examine the particular question of the role of the informal sector, defined as workers lacking coverage by formal labor benefits, which accounts for a large share of the developing world work force. For example, the ILO (2002) argues that the sector accounts for 51% of non agricultural employment in Latin America, 65% in Asia, and 72% in sub Saharan Africa. One view, broadly analogous to the dual labor market literature in the US sees informality as disguised unemployment, receiving workers who have comparative advantage in formal sector jobs, but have lost or are unable to find one.2 An alternative, more in the spirit of Lucas (1978) sees workers indifferent at the margin of formality and informality and transiting to take advantage of profitable opportunities arising in both sectors.3 We nest the competing views on reasons for entry into the sector in our search model and discuss the implications for expected transition patterns. This question offers a rich case study through which to view the strengths and weaknesses of these tools, but it is also of intrinsic interest. As the flow approach to modeling labor markets has become the standard in the literature, a new generation of search models has focused on developing countries, including the incorporation of an informal sector.4 We therefore contribute to the limited supporting body of empirical stylized facts available upon which to anchor these models. From a policy point of view, understanding the nature of the sector is critical. If, for instance, the large fraction of developing country workers found in the informal sector shows dynamics similar to those of the unemployed, then the distortions in the formal sector are indeed large and the case for reform is compelling. If, however, they show dynamics closer to those of the formal sector, then the policy focus shifts to understanding the cost–benefit analysis that agents undertake in choosing among sectors, also with important policy implications (see, for instance, Levy, 2008). Finally, we discuss the challenge to inference posed by the fact that these statistics are both reduced forms capturing comparative advantage considerations as well as the state of the markets, and aggregates across heterogeneous sectors. We therefore explore additional identification strategies arising from worker heterogeneity and the business cycle. The results indicate that a substantial part of the informal sector, particularly the self-employed, corresponds to voluntary entry although informal salaried work may correspond more closely to the standard queuing view, especially for younger workers.

This paper has employed a common methodology of estimating continuous time Markov processes on panel data from three countries with three purposes. First, we discuss a set of statistics that are potentially useful to analyze labor market flows and offer a very simple search model to interpret them. Second, applying these tools to Argentina, Brazil and Mexico, we generate a broad set of proto-stylized facts about LDC labor market dynamics. We find a remarkable degree of similarity in sectoral duration and transition patterns across the three samples. We also find important differences that correspond, albeit loosely, to other comparative indicators of labor market rigidity. Third, we employ these statistics to shed light on the debate over the nature and raison d'être of the large informal sector found in developing countries. To this end, we nest the different hypotheses within the context of the model and develop the implications for the values of our statistics. Exploring the patterns across age and across the business cycle, we argue that a substantial part of the informal sector, particularly the self-employed, corresponds to voluntary entry, although informal salaried work appears to correspond more closely to the standard queuing view, especially for young workers.