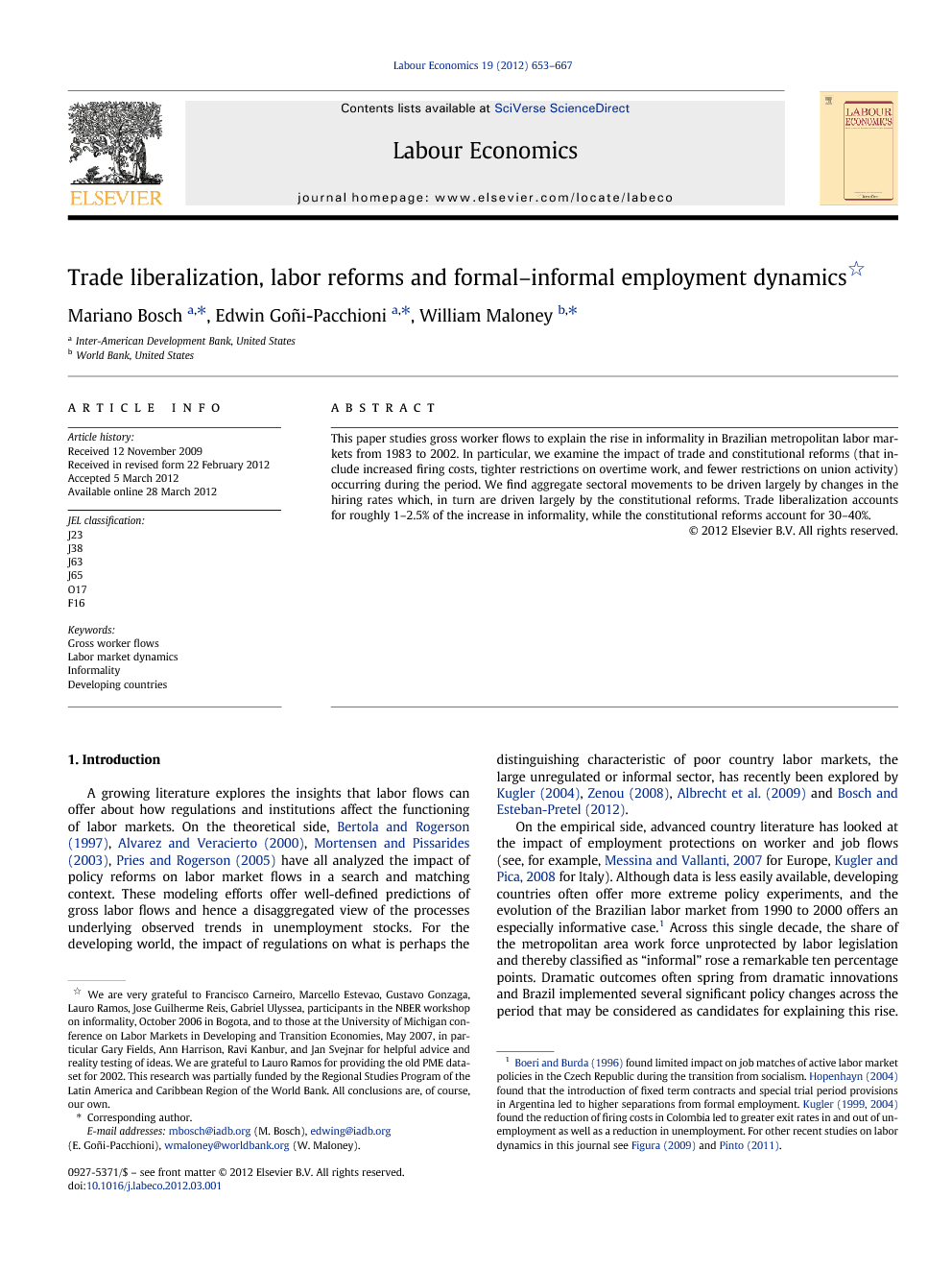 This paper studies gross worker flows to explain the rise in informality in Brazilian metropolitan labor markets from 1983 to 2002. In particular, we examine the impact of trade and constitutional reforms (that include increased firing costs, tighter restrictions on overtime work, and fewer restrictions on union activity) occurring during the period. We find aggregate sectoral movements to be driven largely by changes in the hiring rates which, in turn are driven largely by the constitutional reforms. Trade liberalization accounts for roughly 1–2.5% of the increase in informality, while the constitutional reforms account for 30–40%.

A growing literature explores the insights that labor flows can offer about how regulations and institutions affect the functioning of labor markets. On the theoretical side, Bertola and Rogerson (1997), Alvarez and Veracierto (2000), Mortensen and Pissarides (2003), Pries and Rogerson (2005) have all analyzed the impact of policy reforms on labor market flows in a search and matching context. These modeling efforts offer well-defined predictions of gross labor flows and hence a disaggregated view of the processes underlying observed trends in unemployment stocks. For the developing world, the impact of regulations on what is perhaps the distinguishing characteristic of poor country labor markets, the large unregulated or informal sector, has recently been explored by Kugler (2004), Zenou (2008), Albrecht et al. (2009) and Bosch and Esteban-Pretel (2012). On the empirical side, advanced country literature has looked at the impact of employment protections on worker and job flows (see, for example, Messina and Vallanti, 2007 for Europe, Kugler and Pica, 2008 for Italy). Although data is less easily available, developing countries often offer more extreme policy experiments, and the evolution of the Brazilian labor market from 1990 to 2000 offers an especially informative case.1 Across this single decade, the share of the metropolitan area work force unprotected by labor legislation and thereby classified as “informal” rose a remarkable ten percentage points. Dramatic outcomes often spring from dramatic innovations and Brazil implemented several significant policy changes across the period that may be considered as candidates for explaining this rise. The end of the 1980s saw a far reaching trade reform, and the establishment of a new constitution in 1988 that had substantial impacts on labor costs and flexibility. In particular, it increased overtime costs, raised substantially the penalty for firing workers, and importantly, relaxed restrictions on union activity. However, the empirical work to date on this particular period in Brazil has been surprisingly indeterminate. Looking at separations from formal sector work, Paes de Barros and Corseuil (2004) find, unexpectedly, no impact of the very large rise in firing costs. Looking at the impact of the reduction in trade protection, Menezes-Filho and Muendler (2007) find mixed results on outflows from formal employment and into informality, depending on specification, while Goldberg and Pavcnik (2003) find no impact on the size of the informal sector. We revisit this experiment analyzing the impact of the trade and labor reforms on the labor market through their impact on gross labor flows. Conceptually, such reforms can work through both workers' inflows to and outflows from formal sector jobs and hence a full understanding of the channels of impact requires studying both. To do so, we estimate the impact on the overall level of informality as well as the relative flows using a detailed and extensive rotating panel dataset. Taking advantage of the differential impact of reforms across industries, we find little compelling evidence that trade reform is the prominent or even a statistically significant factor. However, all three labor related dimensions of the constitutional reform appear more important. In all cases, the effect originates more from lower formal job finding rates as opposed to the separations that Paes de Barros and Corseuil (2004) and Menezes-Filho and Muendler (2007) investigated. We estimate that between 30 and 40% of the trend in informality can be explained by changes related to the constitutional reform while changes in trade explain only between 1 and 2.5%.

This paper has sought to explain the dramatic rise in the size of the informal sector between 1990 and 2000 by studying the impact of trade and constitutional reforms on gross labor flows. We establish that trade liberalization played a relatively small part in this increase, but find suggestive evidence that several dimensions of the constitutional reform, in particular, regulations relating to firing costs, overtime, and union power, explain much more. Both effects work mostly through the reduction in hiring rates rather than separation rates that have been investigated most frequently in the literature to date. Overall, the findings confirm the importance of labor legislation to firms' decisions to create new formal sector jobs in Brazil.